Did you know that the McDonald’s Lent- and pescatarian-friendly Filet-O-Fish sandwich was invented in Cincinnati? 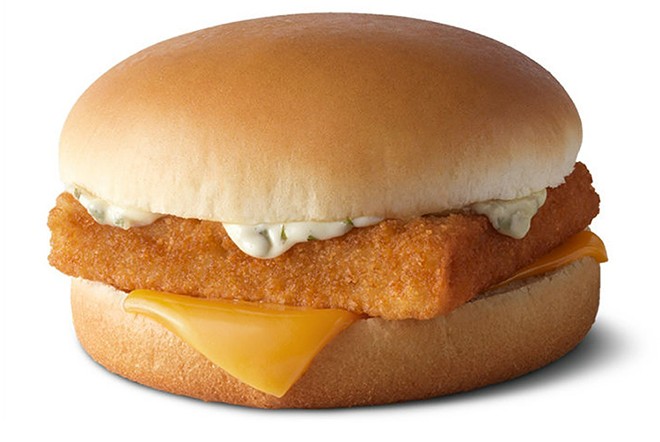 Did you know that the McDonald’s Lent- and pescatarian-friendly Filet-O-Fish sandwich was invented in Cincinnati?

The year was 1962 and Lou Groen owned and operated the first McDonald’s location in Ohio; it is still open today in Cincinnati’s Monfort Heights neighborhood. Groen’s granddaughter Erica (Groen) Shadoin, who now owns the location, told CityBeat that her grandfather noticed that his sales were lower on Fridays during Lent.

Trying to compete with the Frisch’s fish sandwich and knowing that Cincinnatians still wanted their McDonald’s but were bound by a religious obligation to not eat meat on Fridays, Groen devised a plan to sell breaded halibut sandwiches. Erica says her grandfather worked endlessly to develop his own batter and tartar sauce to make the perfect fish sandwich.

At that time, Groen took trips to Chicago to visit McDonald’s founder Ray Kroc, whom Erica says was not super jazzed about the idea of having a fish sandwich on the menu. Kroc reportedly told Groen that cooking fish tends to be trickier than cooking beef or chicken, but Groen didn’t stop pushing because he knew the Filet-O-Fish was a winner.

“My grandfather was persistent,” Erica says.

At the same time as Groen’s invention, Kroc had the idea for a sandwich with a slice of grilled pineapple and cheese on a bun he called the Hula Burger. He was so confident in his Hula Burger idea that he bet Groen it would outsell the Filet-O-Fish. They picked a few restaurants on a specific Friday to sell both sandwiches and the winner would get a spot on the regular menu.

“Let’s just say it wasn’t even close,” Erica says of the Filet-O-Fish’s win.

The Filet-O-Fish was added to the fast-food empire’s permanent menu in 1965 and the rest is history.

In May of 2018, Erica said she got the opportunity to buy the original franchise where the fish sandwich was created, and she jumped on it. She says her brother and father have made McDonald’s a family business and they currently own 27 franchises in the Cincinnati area.

Erica says her family has a lot of pride in being a part of the Filet-O-Fish creation.

“I’m a third-generation owner and operator, so just to be able to follow in the footsteps of not only my dad but also my grandfather and being part of the McDonald’s brand has been a great experience.”