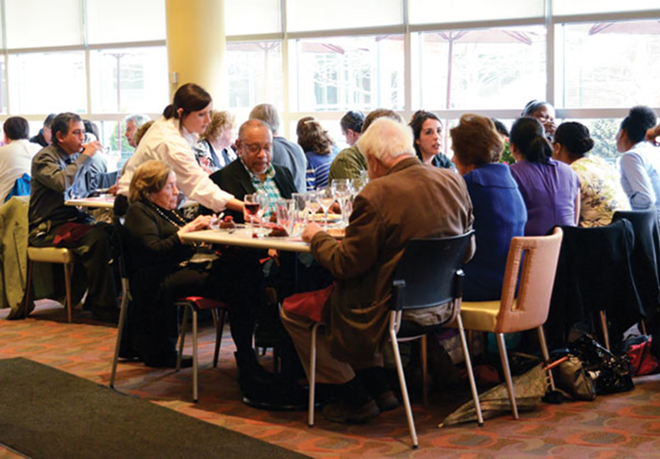 Try four wines with a buffet dinner for $20. Or how about a three-course plated dinner with beverage pairings for that same amount? If craft beer is more your style, you can taste four of them along with “chef-crafted” food pairings for only $12.


Twice a month, the University of Cincinnati, under the umbrella designation “Think Thursday,” hosts a themed pairing dinner open to the public — a concerted effort of the food services at UC to draw attention to the after-hours entertainment on or adjacent to the campus. (Full disclosure: This author is a journalism professor at UC.)

At the wine and spirits tastings ($20) the first Thursday of any month, you can find about 120 patrons enjoying a buffet dinner with four wines or spirits, all organized around a theme — such as Napa cabernets or Irish whiskey and beer — at Mick & Mack’s Contemporary Café in the Tangeman University Center (TUC); the third Thursday, you’ll find a themed three-course Chef’s Table dinner ($20) paired with wine or other beverages.

Part of the university’s 2004 renovation of TUC, Mick & Mack’s, an upscale restaurant with panoramic views of the central campus, serves weekday lunches mostly to faculty and administrators. But after hours, soon after the renovation, the dining service began offering monthly wine-and-food pairings — sparsely attended at first but now selling out every month.

Tim Nowlin of Sharonville and his friend Mary Rademacher have attended almost every month for the past two years. “It’s really fun and very relaxed,” Nowlin said during the April tasting of American pinots, which included pinot grigio as well as pinot noir from Washington, Oregon and California. “We’ve made a lot of new friends here.”

Gene Tensing of Mount Washington, at the same tasting, said he has “only missed a few” of the first-Thursday tastings over the past five years. “It’s a great deal, a wine tasting with a full dinner, and the staff is outstanding.”

John Hautz, UC’s director of food services, describes how the Think Thursday series evolved. “It started modestly, on a small scale, as a desire to showcase UC’s food services and culinary team,” he says. As the popularity of the first-Thursday wine and spirits tastings grew along with the talent and experience of the university’s chefs, they tried a second showcase event — on the third Thursday each month — eventually calling it Chef’s Table. (More recently they’ve added a second Thursday of the month series at the Bearcat Lounge in the Kingsgate Marriott Hotel conference center, adjacent to UC’s campus, offering a craft beer/food pairing dubbed “Thirsty Thursday.”)

Before an academic year starts, the food service team of chefs gets together and creates the upcoming year’s menus for the wine and spirits tastings and the Chef’s Table series. Specific dishes are planned months in advance, and the individual chef who designs a particular menu is the one to produce it on the designated Thursday.

Brian Scott, account manager at Vintner Select wine importer and distributor, works with the chefs to pair wines with the menus. Scott has selected the wines and hosted the wine tastings since 2006. He has seen them grow from intimate, education-oriented groups of 25-30 patrons to full houses of 120 people pretty much just having a wine party. Scott always brings an extra case or so of each featured wine so patrons can purchase the ones they like best — while his supplies last.

The wine and spirits tasting nights also include an all-you-can-eat buffet that tends to be heavy on pasta, potatoes and fish or chicken, although menus also include beef and pork, depending on the night’s theme. (Some patrons complain that the dinner is light on vegetables, and vegetarians would have a very limited set of options with most of the menus.) Five of UC’s food service chefs take turns planning and executing the monthly Chef’s Table dinners.

Jonathan Hunt, executive chef for UC’s catering service, was in charge of April’s “Food of Jalisco & Tequila Tasting” dinner, which included dishes of his design such as Duck Pozole, Guadalajara Gazpacho with Shrimp and Birria Tacos. “I have quite a bit of experience with authentic Mexican cuisine,” Hunt says. “I wanted to give our patrons the feel for an authentic Western Mexican meal. I also wanted to educate everyone on the increasingly significant role that Tequila plays in our culture.”

Given the increasing number of sellouts at these Thursday events, it’s safe to say that the public — whether or not they’re affiliated with UC — likes the results.

THINK THURSDAY dinners at Mick & Mack’s Contemporary Café take place the first and third Thursday of each month. They cost $20 per person, unless otherwise stated, and begin at 5:30 p.m. More: 513-556-3135 or uc.edu/food.