Here are 10 local music releases that made us forget our troubles in 2021, in no particular order. 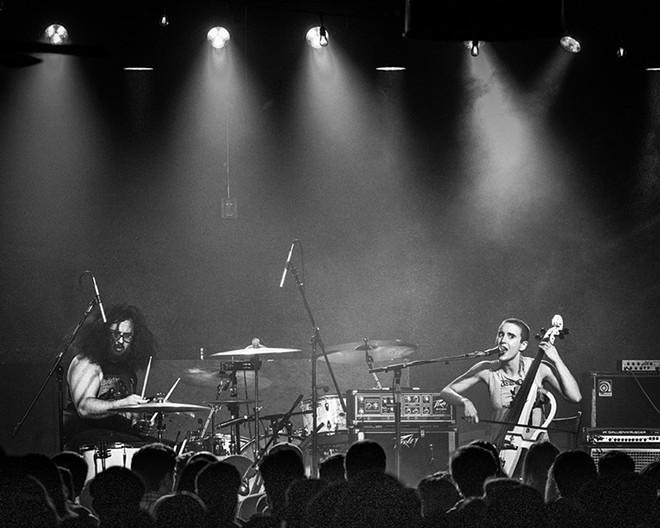 Most people agree that 2021 was a crappy funhouse mirror image of 2020. The world reopened just in time for the Delta and Omicron coronavirus variants to further screw with us, travel restrictions were eased but reimplemented, mass shootings were back to No. 1 on the hit parade, and jackboot conservatives are trashing everyone's civil rights but theirs in a paleolithic return to the social Dark Ages. Despite those ill winds, local musicians returned to studios with inspiration to spare and produced some of the city's best music in recent memory. Here are 10 releases that made us forget our troubles in 2021, in no particular order.

Ben Levin, Still Here
It’s exquisite irony for Ben Levin, in college and barely ankle deep in his 20s, to title his sophomore album Still Here. Levin, piano protégé of local/global veteran pianist Ricky Nye, began his studio journey with 2017’s Ben’s Blues, but he took piano lessons at age 4 and gigged with his weekend-musician father (Northern Kentucky University professor Aron Levin) at age 13. Sonically, Still Here mimics its predecessor with Levin’s supple Boogie-Woogie piano skills and old-soul Blues voice front and center along with his father’s equally silky guitar accompaniment providing perfect counterpoint. The big difference is Still Here is dominated by Levin’s original compositions (particularly the wonderfully current “I’m Your Essential Worker”) with only a handful of covers. Levin is still here for now, but his destiny is clearly on a bigger stage. benlevinpiano.com.


Matt Baumann, The Ivory in the Narrows
A while ago, St. Louis native/Cincinnati resident Matt Baumann made ambient minimalist tone poems with his saxophones and help from like-minded friends on several self-released albums. Baumann credited Albert Ayler and John Coltrane for inspiring his experimental Jazz style but was equally enamored of Warren Zevon and Tom Waits. Those latter influences bubbled up when Baumann shifted gears to singer/songwriter mode under the banner of WolfCryer a decade ago. After several engaging releases, Baumann has returned to recording under his own name while retaining his expansive acoustic/electric Folk sound on the patently compelling The Ivory in the Narrows. Baumann provides acoustic elements, vocals and a novelist’s knack for lyrical storytelling, while estimable sidekick Jeremy Smart brings the electricity. Spartan atmospherics exist in the spaces between and around the two guitarists. There’s a sense of Dave Alvin’s ragged emotional passion on The Ivory in the Narrows, especially within the sinewy power of “St. Anthony,” and the weary quietude of “If Longing Were a Two Letter Word.” But any reference points in Baumann’s work are evidence that influence is rather like a compass — neither one determines the nature of your trip, they just point you in the direction you’re looking to go. mattbaumannmusic.com.


Andrew Gabbard, Homemade
For nearly 20 years, Andrew Gabbard has been guitarist of record for Thee Shams, Buffalo Killers and the Gabbard Brothers, but he’s always written and tinkered on his own time. A 12-hour marathon recording session resulted in his first solo album, 2015’s Fluff, and the similarly constructed Plenum Castle in 2017. His new album, Homemade, is billed as his “debut” solo album, but it’s just his debut for local Colemine Records imprint Karma Chief. Gabbard cites The Beatles, the Beach Boys and obscure but influential singer/songwriter Emitt Rhodes as influences, and those touchstones loom large — especially Brian Wilson, given Gabbard’s do-it-all-yourself home studio approach (save for pedal steel provided by Buffalo Killers utility stringsman Sven Kahns) — but there are flecks of James Gang/Joe Walsh on Homemade, as well. The laconic “Wake Up, Brother” sounds like Walsh fronting the Fabs on Abbey Road, while Gabbard channels vintage Pet Sounds on “Brand New Cut.” As usual, it’s not who influences Gabbard, it’s what he does with it, and what he does is spectacular. andrewgabbard.bandcamp.com.


Lung, Come Clean Right Now
Lung is the oddest couple since Oscar Madison and Felix Unger. Former Foxy Shazam bassist-turned-drum-beast Daisy Caplan and electric-cellist-to-the-stars Kate Wakefield team up to either A) slap on spandex onesies and fight crime in Metropolis or B) comprise a completely unexpected musical duo that upends genre expectations and pummels Grungy Indie Rock into new and unclassifiable shapes. Come Clean Right Now is Lung’s third and best album so far, a brilliantly dark document of feral intensity and agitated ferocity. “Sugar Pill” and “Landlocked” suggest Tony Iommi teaching a Nirvana class at Julliard, while the title track is the melodic cacophony of a Classical Punk chamber duo being menaced by murder hornets. Lung doesn’t try to fit in — they pry their way in with a velvet crowbar. lungtheband.com.


Jeremy Pinnell, Goodbye L.A.
Like many young Country converts, Jeremy Pinnell found commonality between his Punk roots and the early flag wavers of down-home music (“Honesty, truth, integrity and outlaws. Good Hardcore and Punk to good Country — they all have those qualities,” Pinnell told CityBeat in 2012, the year he and his band debuted). After two straight Country gems, Pinnell’s new album, Goodbye L.A., finds the former Light Wires guitarist pursuing a more aggressive Americana direction to great effect. “Big Ol’ Good” could earn Pinnell a slot on Dierks Bentley’s tour, “Night Time Eagle” swings and jumps with Dwight Yoakam’s Bakersfield influence, and the title track tips a cowboy hat to Jerry Jeff Walker and Butch Hancock. Pinnell has found acceptance outside of Cincinnati from the start, but Goodbye L.A. could punch his ticket to an even crazier ride. jeremypinnell.com.


Sylmar, Glass Ladders
Although Sylmar has only existed since 2016, the quintet has made a mighty noise in that brief time; its acclaimed self-titled debut and two Cincinnati Entertainment Award nominations came within a year of the group’s formation. After a handful of well-received singles and EPs plus a rhythm section shift, Sylmar finally dropped Glass Ladders, its long-awaited (and long-simmering) sophomore full length, as a vinyl release from Soul Step Records. Sylmar self-identifies as “Stoner Jazz,” which is fairly apt, but there are many ingredients in the band’s sonic soup recipe, especially on Glass Ladders, which members feel plays more like a debut album. Sylmar’s Indie Rock ethos blends elements of Vampire Weekend’s smartass Pop, Style Council’s slinky cocktail Jazz, Radiohead’s head-spinning experimentalism, Minus the Bear’s angular architecture and Rufus Wainwright’s woozy balladry. Sophisticated and raw, suspicious and naive, brash and guarded, sentimental and cynical, Sylmar is the perfect soundtrack for human dichotomy. sylmartheband.com.

New Sincerity Works, Heirloom Qualities
Mike Tittel is a freaking Indie Rock genius. In the ‘90s, he was Scott Miller’s touring drummer for the Loud Family; he formed New Sincerity Works (NSW) seven years ago as a recording project to document his personal songwriting prowess. The first three NSW albums comprised Tittel’s “mid-life crisis” trilogy, recorded and presented live by a rotating cast of local notables including guitarist Roger Klug, bassist Bob Nyswonger and most recently multi-instrumentalist Mike Landis and vocalist/keyboardist Lauren Bray, among others. The fourth NSW album, Heirloom Qualities, is not a pandemic album — it was recorded in the wake of 2017’s Wonder Lust and was being mixed around the time of Tittel’s 2020 solo album, Sleeping In. Tittel’s catalog safely fits under his broad creative umbrella: thoughtfully contemplative lyrics and a mid-tempo soundtrack that would make Ryan Adams, Paul Westerberg and Jeff Tweedy swoon. There are also the requisite Beatles/Big Star references, but Tittel doesn’t appropriate influence; he paints original scenes with it. Heirloom Qualities is another brilliant portrait that is perfectly framed by his expansive talents. newsincerityworks.com.


The Dents, 1979/80 Cincinnati
The sad reality is that many bands in local American music scenes create a sensation in their right-place-right-time moment and elude wider exposure by never translating that excitement in the studio. The Dents are a Cincinnati case in point, hailed as forward-thinkers in retrospect. The late 1970s quintet welded Garage/Punk guitar/bass/drums to an appropriately driven New Wave/Synth Pop vibe to create what has been dubbed “Synth Punk.” Chrome Cranks frontman/local archivist Peter Aaron was assembling the eventual 2019 compilation We Were Living in Cincinnati and received live tracks from Dents keyboardist Doug Hallet, who had raw 1979 and 1980 concert recordings of the band at Bogart’s. This year, Aaron released those tapes as 1979/80 Cincinnati, and it’s a time capsule revelation. The band spits out sparking, slamming riffs and squiggling synth lines while vocalist Vivien Vinyl focuses the energy with barely contained intensity. The album mixes inspired covers of Robert Fripp’s “You Burn Me Up (I’m a Cigarette),” the Voidoids’ “Love Comes in Spurts,” Patti Smith’s “Pumping (My Heart)” and the Real Kids’ “Do the Boob” with infectious originals like “Wild Bill,” “The Dented” and the before-its-time female empowerment anthem “Sleeping Around.” 1979/80 Cincinnati is a lost classic that’s been thankfully found. hozacrecords.com.


The Hiders, Forever at the End
From The Hiders’ inception more than a decade and a half ago, the Americana/Folk band’s heart and soul has been the near-sibling synergy between vocalist/guitarist Billy Alletzhauser and vocalist Beth Harris. Regardless of the talented cast that has accompanied the duo along the way, from 2004’s Valentine to this year’s stunning Forever at the End, Alletzhauser and Harris have been the Hiders’ constant North Star. Oddly enough, Forever at the End might never have happened without the pandemic. Alletzhauser had written a fair amount of material and did some initial recording while Harris toured with the Heartless Bastards, and finishing the tracks became their lockdown project. Ironically, the album’s title track had been written for Valentine but set aside. Harris had always championed the song, but the pandemic allowed them the time it took to successfully work out its intricacies and complexities which, like the album as a whole, suggests Neil Young fronting Drive-By Truckers. To cite Forever at the End as the Hiders’ best album is like identifying the best gem in a pile of 24 karat diamonds. thehiders.com.