After an 8-Year Break, Foxy Shazam Returns to the Cincinnati Stage with Two New Albums and Three New Members

Foxy plays the Andrew J. Brady Music Center ahead of the Valentine's Day release of 'The Heart Behead You.' 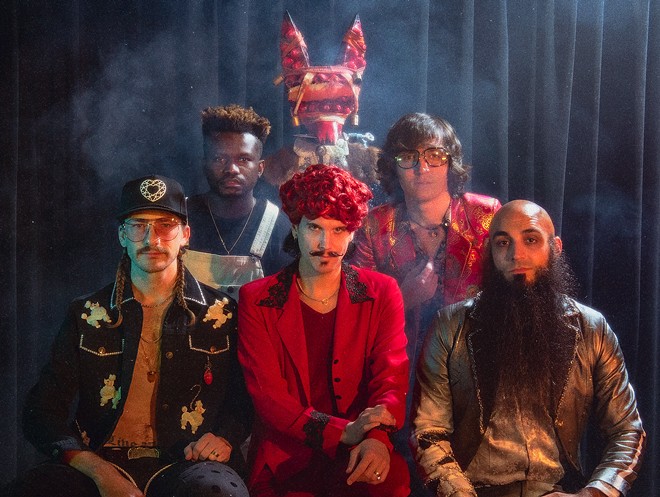 As Amber Ruffin occasionally notes on Late Night with Seth Meyers, “You guys, things have been crazy,” a phrase that can be directly applied to the past eight years for Cincinnati rockers Foxy Shazam.

The band went on hiatus in 2014 before reuniting in 2019 and releasing new music. With that came hopes of touring, but COVID-19 had other ideas.

After nearly two start/stop years of foiled plans, Foxy Shazam finally is back with double-barrelled fury. Their Feb. 12 show at the Andrew J. Brady Music Center appears to be pandemic-proof, and they’re on track for the Valentine’s Day release of their new album, the cryptically titled The Heart Behead You.

“It actually does have a meaning,” says Foxy frontman Eric Nally with a laugh. “I’d call it my poetry. It’s a Rock & Roll way of saying, ‘Let your heart be your guide.’ Take your head out of the equation, don’t overthink anything.”

But it took a second to get to this point.

In April 2014, Foxy Shazam self-released the Steve Albini-produced album Gonzo and embarked on a national tour. Six months later, the band announced via Facebook that they were going on indefinite hiatus.

The next few years found Foxy’s membership vying for the side project diversity prize. Nally did a cameo on the Macklemore/Ryan Lewis single and video for “Downtown,” which turned into a global touring gig, plus he launched his solo career. Trumpeter Alex Nauth founded the lauded Pop/Punk trio Skulx. Bassist Daisy Caplan opened with and folded Babe Rage then formed the much-acclaimed Lung with electric/eclectic cellist Kate Wakefield. Guitarist Loren Turner did a stint with TrxlleyDxdgers. And keyboardist Sky White started the Wendigo Tea Company and threw his lot in with the J. Dorsey Band and Freekbass.

“If you don’t go your separate ways for a little bit, you don’t have anything left to give that you haven’t seen or been a part of,” Nally says. “When Foxy wanted to take that break — and there were no hard feelings — we had a significant amount of time to refresh and recharge.”

The band joined back up in 2019. With Foxy’s retooled resurrection, productive weekly rehearsals suddenly turned into productive writing sessions, and the stage was set for more than just a simple reunion. Foxy Nation nearly lost its collective mind when an April 2020 show at the Taft Theatre was announced; the show sold out within four hours. But the pandemic quickly cooled those heels. The concert was rescheduled for July, and then canceled.

In December of 2020, Foxy self-released Burn, their first new album in seven years, and announced another Taft show for late January 2021. That was followed by yet another cancellation due to COVID.

This was all extremely frustrating for the members of the newly configured Foxy, who were anxious to show off the line-up. Caplan and drummer Aaron McVeigh opted out of the reunion and were replaced by drummer Teddy Aitkins and mysterious bassist Trigger Warning (who always appears donning some type of mask). Guitarist Turner left just before the release of Burn, and local Automagik guitarist Devin Williams tagged in.

There is a sense of destiny at work here. Nally met Aitkins a decade and a half ago at a truck stop in bad weather on the way to New York. Nally noticed the drum key on Aitkins’ keychain and mentioned they needed a drummer in a subsequent conversation. Aitkins relocated to Cincinnati and had a brief run with Foxy, but something didn’t quite click; he eventually played in an early iteration of Automagik. And Warning had been the band’s early touring bass backup before Caplan was fully committed to Foxy and was available when the current need arose.

“Teddy’s style of playing is very unique and that might have been why it didn’t work out then, but where we’re at now, he’s the exact thing we need,” Nally says. “Trigger has been around a long time and he knows us from an early point. And Devin is so passionate about what he does. I never see him without a guitar in his hand. We’ll be outside at a lunch place and I’m like, ‘Why do you have your guitar?’ It’s just natural to him.”

Both new albums, Burn and The Heart Behead You, bear the marks of Foxy’s extracurricular evolution and the fresh-blood contributions of Aitkins, Warning and Williams, the latter on a busman’s holiday from Automagik. And both — though distinctly different — are fantastic additions to Foxy’s impressive catalog.

“Burn was getting everybody back together and seeing how we could transition from what we’d been doing, and The Heart Behead You is more in that groove of it’s not a new thing now,” Nally says.

Nally relied on unusual sources of songwriting inspiration for The Heart Behead You. He cites both Alice in Wonderland and the board game Candyland as influences.

“I was telling people, ‘It’s this whole lush Wonderland/Candyland thing. The whole album’s about love,’ and everybody was like, OK, yeah, whatever,’” Nally says. “Everybody tries to write a good love song, whether or not you use the word ‘love.’ I don’t want to sound cheesy, I still want to feel dangerous, I still want to feel like a Punk band or a Rock band. At the same time, let’s embrace love. I think we did that in a way that’s our own and isn’t too cheesy or huggy-kissy.”

The newly recharged Foxy is definitely on a roll, with two new albums recorded and released in just over two years and a new video for the song “Dancing with My Demons” from The Heart Behead You, which was filmed in the haunted surroundings of Bobby Mackey’s (at press time, Nally was attempting to get horror director Eli Roth to post the video because he feels it’s in the director/actor’s wheelhouse).

But the stage is where Foxy has always shone the brightest, and Nally is ready for the world to see the new line-up’s considerable chops, particularly with the catalog material.

“I have to be careful. (Former bassist) Caplan’s going to be reading this,” Nally says with a laugh. “For me, the technicality is a little more refined. Early on, I sought out members for the band. We were there because we were supposed to be there and we haphazardly figured out a way to make it all work. With this group, the parts are already written, there’s hardly any room for interpretation yet they’re still unique players and any musician understands they can bring themselves to something that’s already written. I think we picked the right guys. What they bring naturally works with what we’ve done in the past and what we’re making now. The way to play good is to feel good, and I think that’s what it sounds like.”

The first scheduled Foxy Shazam show at the Taft Theatre in 2020 had the air of a one-off reunion, but the band’s tenacity to get back onstage coupled with the releases of 2020’s Burn and 2022’s The Heart Behead You exhibit all the earmarks of a semi-retired champion ready to take on all challengers. Again.

“Yeah, there’s a lot more to come without having to wait because of how much time we’ve had to fill our reservoirs,” Nally says. “I’m excited that things can start being easier for us to be on the road. This is definitely Foxy back in full force.”

Foxy Shazam plays the Andrew J. Brady Music Center (25 Race St., Downtown) on Saturday, Feb. 12. Attendees must be fully vaccinated or show proof of a negative COVID test from the past 72 hours. Info and tickets: bradymusiccenter.com.