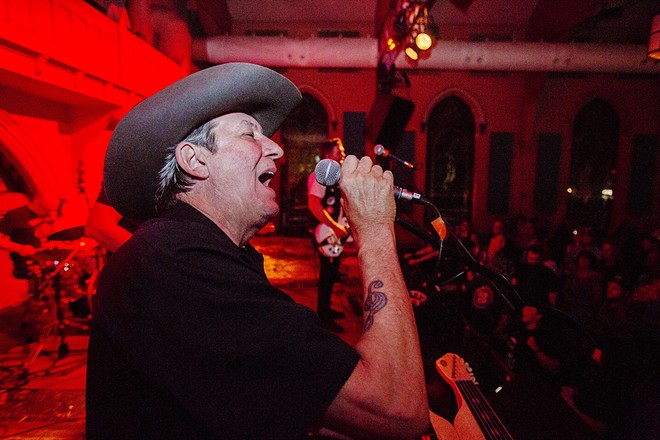 The legend of David Rhodes Brown is a bit of a tall tale within the Cincinnati music scene.

Standing at a natural 6’5” before adding his signature cowboy boots and hat, Brown literally and figuratively towered above his constituency with his impeccable musicianship, booming voice, over 60 years of experience and incomparable affability and kindness.

To know Brown as a musician meant constant delight and surprise, as he was able to take on new projects and shift seamlessly to new genres, lineups and sounds with the effortless ability of a natural talent. To know Brown as a man, however, was even more meaningful. Brown maintained a reputation for joy, compassion and generosity through his days that somehow managed to supersede his own monumental talents and gifts to Cincinnati music.

Brown, who in many ways felt like a myth, touched the lives of many and there is no better way to remember someone than to hear directly from those they loved the most. Brown’s bandmates, Ryan Malott (500 Miles to Memphis), John Schmidt and Doug Waggoner (The Warsaw Falcons), and Brown’s wife, Bobbi Kayser, shared with CityBeat memories both of Brown the musician and Brown the man. The stories may sound like fiction at times, with small things like dates, details or specifics being lost to history, but the truth always comes through – Brown was wondrously talented, relentlessly positive and unbelievably charitable. This is the legacy that he left with his fans and loved ones.

Brown’s musical career spanned multiple decades, cities, genres, bands, instruments and more. He began at a young age by singing in choir and learning basic notes on his sister’s guitar. Shortly thereafter, Brown began his first band in junior high before joining the Navy at 18 years old and developing his skills, reportedly on a 12-string guitar, no less.

After his honorable discharge, Brown continued to make music for the next five decades, even forming a punk-rock band in 1978 – quite the departure from the country and Americana he became known for playing by current music fans. He often was known to play with multiple Rock & Roll Hall of Famers like Bo Diddley when they came to town and frequently played four nights a week at the height of his performing days.

Brown had a talent for reinvention and an innate ability for songwriting and musicianship.

“The area that I think Dave was the strongest was songwriting,” Schmidt said. “He wrote incredible music. What was great about his songs was that they just made internal sense. His songs made sense from beginning to end. He had a natural sense to where the song was going, and it made it easy to like and easy to listen to and easy for Doug [Waggoner] and I to work with.”

Not content with keeping his gifts to himself, Brown was known for helping fellow musicians in any way he could and made an indelible impact on Malott’s early days as an up-and-coming artist. Recounting the way that Brown joined 500 Miles to Memphis, Malott said he was in the midst of planning an event (a Johnny Cash or Hank Williams tribute, depending on who you ask) and was receiving constant calls from someone who wanted to perform.

Malott didn’t return those calls but was surprised to see Brown come to the event with his lap steel, explaining that he had been calling him for weeks and wanted to know when he could play. Malott let him join him on stage, and the chemistry was immediate. Malott asked if Brown would want to play with him again. Brown’s response? “‘Aw, fuck that, I’ll just join your damn band,’” Malott recounted.

In addition to joining 500 Miles to Memphis around 2005, Brown helped Malott learn how to write songs, play guitar, understand how to manage a band and other invaluable skills.

“David cut the learning curve down for me by maybe a decade. And he funded our second record, which is Sunshine in a Shot Glass, which is one that got us signed, the one that put us on the map, the one that launched our career,” Malott remembered. “If Dave hadn’t given me that opportunity, I don’t know what my musical career would’ve been, if anything at all.”

Brown’s musical talents extended beyond songwriting and carried over to live performance, where he was a presence that couldn’t be overlooked.

“The dude knew he was a rock star because he fucking was. He had that X factor, moxie, whatever you want to call it. He had all the elements required to be a superstar,” Malott said.

“He was a big personality. He was big onstage, he was big offstage. He was one of those guys where he’d walk into a room and you saw him because he was so tall, and you heard him because he had this booming voice and great laugh,” Schmidt said. “He loved everybody. He was a real booster of other musicians and the scene in general.”

Waggoner added, “Dave was a force upon himself. He was always there. He never quit.”

Brown’s influence on local music was only eclipsed by Brown’s love for helping others and his selfless generosity. Kayser said she met Brown on a blind date when they had each given up on long-term relationships. But after that fateful meeting, they quickly formed a friendship, followed shortly by romance and a proposal after a harrowing, snow-filled, drive from Cincinnati to Rabbit Hash.

Kayser saw first-hand Brown’s love of music as well as his love for others.

“He was so generous and always looking out for the people around him. He just couldn’t stop himself when it came to that. It cost us a lot of money over the years, but it was so worth it because it made him feel so good,” Kayser said. “He bought instruments for people that lost theirs. He paid for lessons for other musicians to get more educated in their field. That list goes on forever.”.

“Every Christmas, he’d go to Walmart guest services and just pay off someone’s layaway Christmas presents,” Malott said. “He would just give. He gave all of his money away. He gave everything away. He just gave and gave and gave.”

Both Kayser and Malott said that Brown didn’t desire any recognition for the acts. He wanted to give to others solely because it was the right thing to do and it made him feel good; the act itself was a gift enough, they said.

For many of Brown’s fans, friends and family, he seemed like a permanent fixture within Cincinnati’s music scene – that he would always be here, always perform and always create top quality music and showmanship. Losing Brown has caused a deluge of memories from those who knew him or appreciated his work. Even after decades’ worth of memories, it still doesn’t feel like enough.

Brown’s presence felt everlasting when he was with us, but his legacy undoubtedly will be. David Rhodes Brown, the musician, will live through the vast amounts of recordings he was on and the bands he was a part of. But David Rhodes Brown, the man, is who will truly stand the test of time, as the lives he touched truly can’t be counted or tabulated.