Touring behind his most recent album, ‘Evening Machines,’ Isakov plays a sold-out Madison Theater this weekend 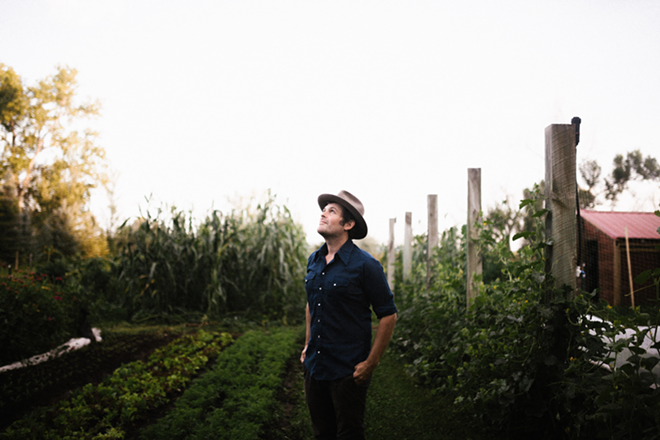 REBECCA CARIDAD
Gregory Alan Isakov
On a sunny, fall day outside of Boulder, Colorado, Gregory Alan Isakov must decide whether to harvest a row of organic lettuce on his three-acre farm or record a song in his barn studio. Or should he do both? We should all have such choices to make once in a while.

The South African-born singer/songwriter is touring again in support of last year’s exquisite Evening Machines, his fourth record of rich Indie Folk and his first release on Dualtone Records.

This homemade collection strikes a different tone than Isakov’s previous DIY releases, as it’s threaded with darker textures and more lushly layered arrangements. His customary acoustic guitar doesn’t lead the way as much as the warm, gentle thrum of keyboards, cello, violin and “god noises” — what Isakov calls the electronic, analog patterns he buries in the mix that you can feel more than hear.

Isakov and his family emigrated from Johannesburg because of apartheid in the mid ’80s, when he was 6 years old. They resettled in Philadelphia. The itinerant musician later followed his love of all things green and attended college in Colorado, majoring in horticulture.

“I’ve always played music, but I really have a strong love for plants,” says Isakov from his home studio in Boulder. “Music was something I did after work. I worked in a lot of nurseries and landscaping and stuff. I’d always thought that was going to be my career, and then I pushed myself to play out more and more.”

In college, Isakov worked on a farm where he didn’t have to pay rent during the winter “off-season,” so he would travel instead.

“I would travel the Northwest and play these coffeehouse gigs that would pay for my campsites. Or make 10 CDs at Kinko’s and try to sell those, whatever it took,” he says. “It all started from a love of traveling.”

This compelling blend of agrarian and musical elements cultivates a kind of poetic symmetry. Both livelihoods demand faith in the process of creating something new, whether that means planting vegetables for harvest or writing songs for release. Isakov uses one method to fulfill the other and each sustains him in cyclical ways.

Isakov’s farming is on a bit of a more demanding schedule, as he provides vegetables to about 12 restaurants in the Colorado area. The tricky part comes when the two worlds brush up against each other.

“The farm is more full-time in season, when I’m growing; it’s a lot of farm-to-table dinner stuff (for the restaurants),” he says. “I’m sort of a madman in the shoulder season when the two are kind of meeting in the spring and fall. I’m coming home from tour, and I’m also germinating my entire greenhouse, getting everything ready. Those are kind of the craziest times.”

Evening Machines — recorded at night and named for the twinkle of instrument lights in the darkened studio — hums with fractured melodies and dusky mood. The opener, “Berth,” is an immigrant tale of coming to America and trying to mine its past promise; it swells with melodic majesty and the flow of keys and strings.

An immigrant himself, the song has particular resonance to Isakov, especially living in a time when anti-immigrant sentiment has been reawakened in the U.S.

“It’s been a sad couple of years,” he says. “My community here is filled with immigrants, and growing up in Philadelphia, most of my friends weren’t born in America. With that song, I pictured a movie about these immigrant boys with angel wings flying over the ocean and landing in a different time. Then you’re taken through time to a modern setting. I realized maybe it’s about the Statue of Liberty and the poem (‘The New Colossus’) that mentions ‘teeming shores,’ so I took that line which tied the song together for me.”

Isakov’s pastoral perceptions color his balladry. Impressionistic and cinematic, his affecting music was recently used in the indie film The Peanut Butter Falcon.

“I went with my parents and girlfriend to the theater, which was one of the coolest moments of my life, and they used one of the songs I did with the symphony in the movie,” he says.

Despite occasional topical subject matter, Isakov’s music more often than not evokes half-finished conversations between lovers, storm clouds creeping in, hollow moons and cracked open skies.  Nocturnal ache pulses through Evening Machines and you can sense the glistening dew on the fields, the moonlight pouring through the window and the fever dreams rumbling through a dark slumber.

Isakov’s songs tend to be allusive rather than literal; his stories, soaked in reverb, somehow magnetically pull you in. There’s a soothing quality to the record’s emotional cadences. Even the album’s cover art conjures up an ash gray and green sky, with a pensive Isakov surveying his field of grass beneath billowing clouds.

“I love words,” he says of his evocative writing style. “I read a lot of poetry. But I always looked up to writers like Leonard Cohen or Bruce Springsteen, who can tell a whole story (where) all of a sudden you’re in the Southwest or sleeping in a car, and it’s this whole movie in two and a half minutes. And (it makes me) wonder, ‘How did that happen.’ I love that and try to incorporate a bit of that into my stuff.”