The Rock star, producer — and master upholsterer — meticulously restored the bench and added creative upgrades like an amplifier inside of the seat 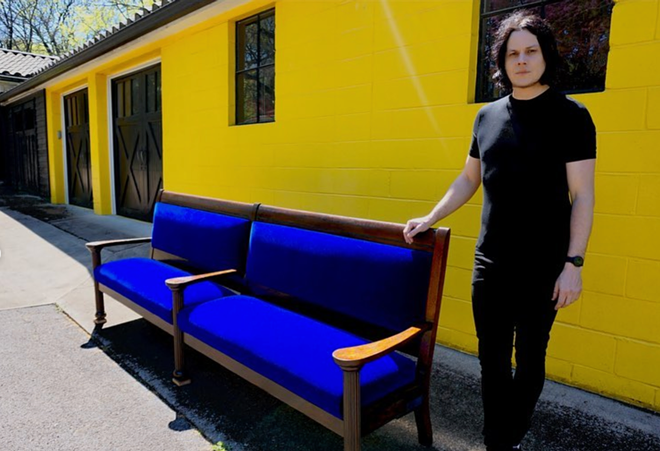 You're most likely familiar with Garage Rocker Jack White and his singular voice from his leading role in well-known bands The White Stripes and The Raconteurs. And while his musical career may be what introduced you to the man of many talents, you'll be pleased to discover (if you haven't already) he's also a master upholsterer.

One of White's most recent projects is a vintage masonic bench, which he restored — and added a bit of creative flair to in the form of a built-in amplifier — as a gift to Johnny Wirick's Masonic Sounds Studio inside of Dayton, Kentucky's The Lodge, a century-old Masonic Lodge that has been renovated into a bustling arts hub over the past decade.

We chatted with Wirick via email to learn about his relationship with White and more about the one-of-a-kind bench.

Wirick, a Punk Blues Rock guitarist who also goes by the name Johnny Walker, is a member of The Soledad Brothers and most recently the All-Seeing Eyes (among many other bands). He met White while playing in dive clubs throughout Toledo and Detroit and the two connected through music — practicing guitar and teaching each other, experimenting with recording, seeing bands play.

White's interest in upholstery and restoration isn't a new thing. His passion stems all the way back to his teenage years where he spent time as an upholstery apprentice for a family friend in Detroit, where White is from. He also studied the craft at the city's Cass Tech High School, according to Wirick.

White and Wirick spent some of their free time together restoring and repurposing things they found left for garbage.

"We were both broke as hell," Wirick says. "It was a special treat to go to the corner store to buy Mexican Cokes! We worked on projects together, like the peppermint triple tremolo amp. We would go out on 'big trash day' in Detroit and find old stuff getting thrown out and fix it, clean it, repurpose it. Jack found an egg chair. Some old Ludwig drums that were good for wall hangings. You know, broke but clever."

White now runs Third Man Upholstery, and its Instagram page, where he showcases various upholstery and restoration projects, poetically documenting the process behind his beautiful creations.

According to Wirick, the Masonic bench that was used in White's gift to him was a surprise over a year in the making. Wirick says the bench was from a Blue Lodge (a certain type of Masonic lodge) and was originally found with blue material.

"It holds all kinds of secrets that I can't tell you about. Some I probably don't know myself," Wirick says.

White restored the piece top from bottom and used a cobalt blue wool mohair fabric to reupholster the piece.

Along the journey, White went into thoughtful detail about elements of the restoration, tying it back to its historic origins though Instagram posts. Take a look at his post about the bench's armrest.

But one of the most unique features of this project is the fact that White installed a freaking guitar amplifier inside the seat of the bench. He calls the bench My Sonic Temple.

"So I can sit on it and go on crazy psychedelic guitar trips. There is enough room on it for three friends to go along with me," Wirick says.

While the amp-in-a-bench concept may be a first, sneaking a musical element into his upholstery projects isn't new to White.

According to an NPR interview, when working as an apprentice, White and Brian Muldoon, his mentor, started a band together called The Upholsterers and hid 100 records in pieces of furniture they worked on for the upholstery businesses' 25th anniversary.

"We even made it on clear vinyl with transparency covers — we thought you couldn't even X-ray it to see if it was in there. I'm talking about — really, you could rip open a couch and think it's not there 'cause it's inside the foam — sliced inside the foam and slid in there," White says in the interview. "I mean, we really went to great lengths to make sure possibly no one would ever hear our record! But it's there. It's so great. It's there. There's a hundred pieces of furniture out there that have those records, and maybe one day someone will find them."

When asked where he plans to put the bench, Wirick said White told him he had a "dream" it would go into The Lodge's Blue Room (the Masonic Sounds Studio).

"Who am I to deny someone their dream? That's kind of what the Lodge is all about: people realizing their dreams through art," Wirick says. "There are a lot of creative people there and I want to think it serves as an incubator of sorts. Why wouldn’t I put the My Sonic (Temple) bench in my masonic lodge? It belongs there."

To follow along on the bench's transformation, visit @thirdmanupholstery on Instagram. Learn more about The Lodge here.