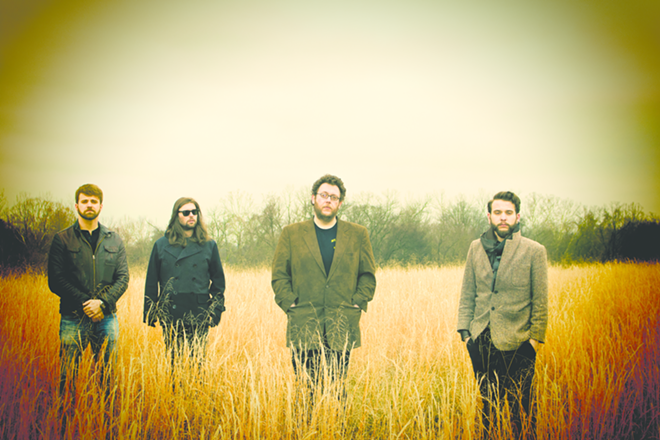 Photo: Provided
The sound of Nashville's Sound & Shape is shaped by influences like Yes, King Crimson, Oasis and Smashing Pumpkins.

Vocalist/guitarist/songwriter Ryan Caudle doesn’t care for the term “Prog” when it comes to describing his Nashville-based quartet, Sound & Shape. And while a few of Caudle’s influences and elements of the band’s sonic fingerprint support the conclusion, albeit with the qualifying “Pop” suffix, he avoids strict classifications.

“I never answer the question, ‘What kind of band are you?’ beyond saying, ‘Rock & Roll,’ ” Caudle says from his Nashville home. “Descriptors are misleading. If a person has never heard you and you say, ‘We sound like this and this,’ they’re going to go into it thinking, ‘They sound like this and this,’ and that’s going to be their frame of reference. Ambiguity when describing yourself is important.”

Caudle’s unvarnished identification is accurate, especially on Sound & Shape’s latest release, the five-track EP Peasants. The band’s contemporary edge, honed over a decade-long history, is a potent blend of simple Pop directness and a thoughtful complexity.

“I sent the demos to a booking agent friend of mine and he wrote back, ‘It sounds like Iron Maiden writing Pop songs,’ ” Caudle says with a laugh. “I love The Number of the Beast, but I’m not well versed in Iron Maiden. I sent the record to a journalist buddy of mine and he was like, ‘Who are your influences?’ And I told him The Beatles, Noel Gallagher, Billy Corgan, Ray Davies, Roger Waters, Neil Young. And he was like, ‘I don’t hear any of that.’ And I guess that’s good.”

That’s fairly potent evidence that Sound & Shape has assimilated its influences well and incorporates them into a singular creative vision. It’s not like the band has strayed impossibly far off the beam since its 2006 debut, Where Machines End Their Lives. Since Caudle is the primary songwriter and Sound & Shape’s sole constant since its inception, the band’s sound naturally reflects his personal growth and journey.

“Everybody gives their opinion but the artistic choices are ultimately mine,” Caudle says. “For me, there’s a clear before and after when my son was born. My perception of everything changed, and I knew it would, but I didn’t realize how profound it would be. On the first few records, the lyrics are kind of cosmic and positive, but when he was born, something shifted in my soul. Things I thought were important are not and things I never thought about mean the world to me. We’re in extremely uncertain times right now and it really has informed my writing.”

“I heard King Crimson and fell hardcore for that, and that’s all over the first record,” Caudle says. “We were hanging out with a friend of ours who was in a band called An Albatross, and I was playing him some stuff we’d recorded before the second (album) and he was like, ‘You guys sound kind of like Yes.’ And I was like, ‘I’ve never listened to them,’ so I bought Fragile and Close to the Edge. I remember pulling my van over about five minutes into Close to the Edge and just listening and it blew my mind. At the same time, The Beatles are my favorite band ever, and Noel Gallagher and Billy Corgan are my two idols, so I’ve always had the Pop thing in my brain. I thought I could marry the two because that’s what Yes is. They had melodies you could latch onto and hooks that were catchy. That’s what I envisioned for us, but it was a time in the industry when nobody was going to give a shit about that.”

“It immediately opened up my writing because I was capable of orchestrating a bit more instead of covering so many bases myself,” Caudle says. “It’s definitely created more depth, and who doesn’t love guitar harmonies? But there’s a fine line; obviously, Thin Lizzy is the bar by which all two-guitar bands should be measured. It’s something I try to use sparingly. The tendency when you have two guitar players is to just wank your way around everything, and I’ve done my best to kind of go the opposite way.”

The other major change for Sound & Shape in the past year was the acquisition of new management. In the three years since Bad Actors, Caudle signed a publishing deal and began churning out material, resulting in a backlog of more than 60 songs. The band was in the process of assembling a full album’s worth of material when its new managers advised the group to record a handful of demos to shop around. When Caudle felt the subsequent sessions needed some tuning up, he suggested Nashville’s The Bakery Sound Studio and its engineer Josh St Moblo, who had previously worked on Bad Actors. St Moblo suggested that the band just come in and re-record everything, which resulted in Peasants’ five tracks.

Rather than just shop it around, Sound & Shape’s management decided to release Peasants in March under its own banner, although the group is still entertaining label offers. But Caudle is already looking ahead to what’s next. The band isn’t including anything older than songs from Bad Actors in its current setlist and has worked up songs from the slush pile of newer material to play live.

“It kind of drives our management nuts, but I’ve got to keep myself entertained,” Caudle says. “We played the other night and the first three songs were all new and I was looking for one of our managers to watch the steam come from his ears, but I warned them beforehand. We didn’t play the single on the last tour. We all knew it, but we didn’t have it rehearsed up; I wouldn’t say I’m a perfectionist, but I want to make sure we know what we’re playing. We are playing the single now, so it’ll be fine.”