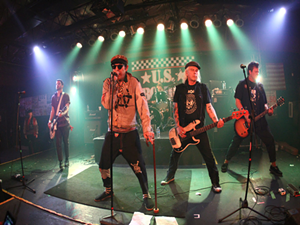 Veteran Punk band U.S. Bombs has a history almost as tumultuous and frenetic as their genre. Since their 1993 formation in Orange County, California, the band has played as a quartet and a quintet, recorded about a dozen studio albums and featured nearly two dozen different members, including notables Jonny “2 Bags” Wickersham (Social Distortion), Jack Dalrymple (One Man Army) and Zander Schloss (Circle Jerks).

The only constant in U.S. Bombs over the past 25 years has been vocalist/pro skateboarder Duane Peters, who has periodically shelved the band for side projects and personal and professional sabbaticals. Three years ago, he announced the break-up of U.S. Bombs via Instagram, citing 2013 as the band’s actual year of demise; last year, after failed negotiations to reunite the longstanding lineup of guitarist Kerry Martinez, bassist Wade Watson and drummer Chip Hanna, Peters assembled a brand-new group and recorded the just-released Road Case, their first album of new material in 12 years.

From the onset, U.S. Bombs has espoused an old school brand of Punk, a raw blend of The Clash’s political awareness (The Clash being Peters’ primary influence; just last year, the new lineup recorded “Death or Glory” and “Straight to Hell” covers), The Ramones’ swagger and The Sex Pistols’ aggression.

The group has notched a number of interesting benchmarks along the way. In the late ’90s, U.S. Bombs became the first signing to Tim Armstrong’s Hellcat imprint through Epitaph Records. Soon after, the band did a stint as the house band for Jim Breuer’s season-long hosting gig on Comedy Central’s stand-up showcase, Premium Blend. Their first Hellcat release, 1997’s War Birth, was their biggest selling album but it was also the last for guitarist Chuck Briggs, who left the band for health reasons (he died shortly thereafter from the HIV virus, contracted through intravenous drug use). Peters also struggled for years with substance abuse problems, although he has by all accounts been sober since rehab in 2007.

Peters’ Punk passion has never been in question, but his volatility could be a mitigating factor in the band’s steady turnover. Long known as The Master of Disaster, Peters famously robbed a 7-Eleven twice in one day, did several years of hard time and, in 2014, he pleaded guilty to a felony domestic violence charge.