Smut has become one of Cincinnati’s most incendiary on-the-rise bands, without really intending to. 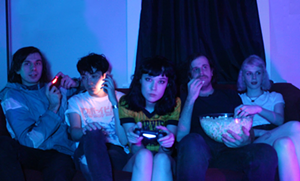 In Smut’s relatively brief three-year history, the Cincinnati band has compiled a trio of short but potent recordings, including the just released End of Sam-soon, endured some personnel shifts, raised its local profile to a prominent level and scored various touring opportunities beyond the Queen City’s zip code. While remote tours were initially a stated goal of the Noise Pop group, little else was by purposeful design on the musicians’ part.

“Usually we just hop onto things. It’s the unintentional method,” says vocalist Taylor Roebuck from Smut’s new Northside band house. “Our label, Broken Circles, has done a lot for us in the last year, too.”

The group’s upcoming weeklong tour swing through the South with Indie Rock darlings Bully is a case in point. After hearing about Smut through a mutual friend, Bully guitarist/songwriter/vocalist Alicia Bognanno came to see the band last year and offered an opening slot.

“We didn’t hear anything for an entire year, so we were like, ‘That’s probably not going to happen,’ ” guitarist Andrew Min says. “Then we just got the email, and it was like, ‘OK, here’s the (info for the tour dates).’ We were like, ‘Oh, OK.’ We had to call our jobs and get a week off work.”

However it’s being achieved, Smut is doing very well. The band has amassed a fervent fan base and evolved from a noisy Post Punk band into a fully formed melodic Noise Pop group with Punk tendencies, which was exactly what the musicians wanted for End of Sam-soon. Smut’s evolution has largely been a matter of finding the chemically correct combination of players as well as the group’s search for its actual sound, a blend of organic path-finding and deliberate decisions.

“A lot of it was realizing we love and want to make Pop music,” says guitarist Sam Ruschman. “The dissonant Punk stuff is cool too, but I think we grew out of it. At one point, we just tried to take a risk with writing a song with the intent of (it) being a Pop song and then afterward dirty it up.”

Smut’s lineup has been in a state of flux since its formation in late 2014. The group began as trio with Roebuck (who also has acting interests and had never been in a band before Smut) joining Min and Ruschman, who’d played with various Greater Cincinnati outfits.

“I moved from Kentucky to Ohio to live with Andrew, and (Min’s Garage Pop band) Plastic Inevitables had disbanded and he wanted to keep writing music,” Roebuck says. “We worked on some stuff together, and I realized I liked it, but I still wanted to be onstage and perform. Essentially, I felt like I was acting like a singer until people started reacting to it, (and) it was, ‘Oh, this is what I do.’ ”

After losing its original drummer, Smut enlisted Chris Campbell, who splits his time between Smut and another touring Cincinnati band, Leggy. The band then added Erich Mukuda on bass, allowing Ruschman to move into the second guitar position. Mukuda eventually left to go back to school, with his place capably taken over by Bell Cenower.

“Bell is really good, and because of that, rhythm-wise, we’re becoming a lot more crisp and tight,” Roebuck says. “When you get different members, they have different types of music they like to play, so it morphs into a slightly different thing..”

Smut’s recent spate of touring has been at least somewhat designed to promote End of Sam-soon, the creation of which actually began last summer. The band had worked up new material and was anxious to document the next phase of its creative journey, so the musicians hit the studio and let it rip.

“When we recorded the demo, we had just written the songs and we were really excited and just wanted to get them to tape,” Min says. “We hadn’t really practiced them at all, so it was an off-the-top-of-our-head kind of thing.”

Consequently, last year’s Sam-soon demo sounded like Smut’s debut EP, 2014’s Purse, a raw, powerful and noise-driven blurt of energy and volume. The sound of the new album and ultimately the band itself has been forged by relentless gigging and touring over the past year, the influence of new members along the way and the input of former Pomegranates multi-instrumentalist Isaac Karns, who engineered the album at his Marble Garden studio.

“We did add some synths,” Ruschman says of the demo-to-album conversion. “I don’t think we changed the songs that much, we just tightened them up. If there was a philosophical shift, it was that we wanted high fidelity for the first time.”

Min says the band members liked the way the demo came out, but they wanted to punch it up for the full-length.

“We wanted Tay’s vocals to be represented more clearly,” he says. “We made the decision to put some distortion on the demos to make it more lo-fi and dirtier, but we realized we wanted the Pop to carry through a little more.”

Karns made the band feel comfortable during the sessions, offering a lot of useful tips and setting the mood.

“He has a lot more experience with studio recording, so he taught us a lot of weird tricks,” Roebuck says. “Like for me, standing on your toes if you’re trying to focus on hitting certain notes. He burned a lot of incense, too. It was a full experience, very nice.”

End of Sam-soon was then mastered by San Francisco sound designer/editor Alex Previty, who has worked on several short films and video games, including the forthcoming Spider-Man game for PlayStation 4. His work on Sam-soon coincided with the PS4 project, so the band lobbied Previty to slip some Smut into Spider-Man.

“We begged him to put us into the background in the cityscape sounds,” Min says. “He said, ‘We’ll see.’ ”

So if you’re doing a little PlayStation web-slinging in the future and find yourself grooving to dissonant Pop emanating from the New York skyline, you just might be getting your Smut on.