Masters of angular guitar grooves, each rose to prominence at the turn of the century. 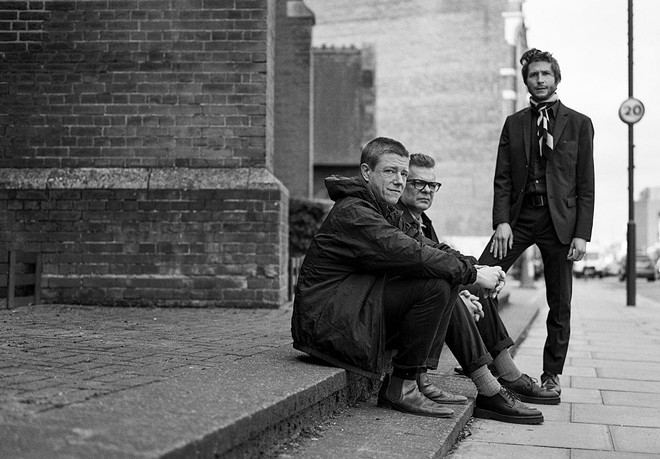 Are there two more consistently on-brand musical outfits over the last two decades than Interpol and Spoon?

Masters of angular guitar grooves, each rose to prominence at the turn of the century — Spoon with 2001’s Girls Can Tell, the band’s jump from arty, minimalism inspired by the band Wire to songcraft-centric hook machine; Interpol with its 2002 debut Turn on the Bright Lights, a visceral, uncommonly mature effort that melds myriad post punk influences with a particular strain of post-9/11 desolation. Subsequent recorded efforts from each have been variations on their aesthetic — deceptively simple tunes marked by interlocking guitars, driving rhythms and male singers with modest but distinctive deliveries.

It should then come as no surprise that the two are teaming up for the “Lights, Camera, Factions” co-headlining tour. Both acts have made multiple stops in Cincinnati over the years. Spoon has delivered terse, sharp-ededged shows at venues from long-gone staples of the scene (the iconic Sudsy Malone’s Rock & Roll Laundry and Bar and the equally beloved original Southgate House) and opened for Beck at Riverbend Music Center in 2019. Interpol’s first local stop — at a sold-out Southgate House in January 2003 — was one of the most buzzed-about shows of that era, occurring a few weeks after Pitchfork crowned Turn on the Bright Lights the best album of 2002. It seems Interpol also has an affinity for Bogart’s, with almost every local gig since occurring at the longtime Corryville venue.

Both bands have new albums that no doubt will influence their current setlists, which are sure to include songs from across their histories. Interpol has The Other Side of Make-Believe, a tweak on their formula that nonetheless remains true to form, while Spoon serves up the stellar Lucifer on the Sofa, as ear-pleasing as anything in the band’s long and fruitful discography.

“We did a little bit of touring in September and October (of 2021), and I was warned it would not be fun,” Spoon frontman Britt Daniel said in a recent interview with the Austin Chronicle. “It was actually just as fun. All of the essential elements (were there) — a lot of people cramming together and having a shared experience with really loud music. That’s probably the most important part of the deal, right? And that was still there.”

Interpol and Spoon perform at 7 p.m. Sept. 1 at Andrew J. Brady Music Center. Doors Open at 5:30 p.m. Water from Your Eyes will open the show. There are no COVID-19 protocols. Info: bradymusiccenter.com.