Arrests Made in Pike County Killings 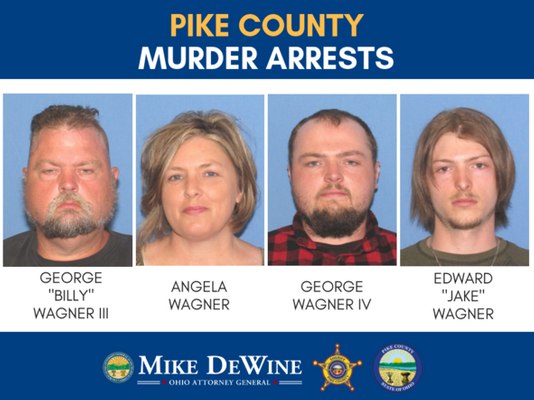 Provided
Mug shots of the four suspects in the April, 2016 Pike County massacre

Ohio Attorney General Mike DeWine and local law enforcement officials today announced they have made arrests in the killing of the Rhoden family in Pike County.

Three small children were spared in the massacres, but there were no other witnesses. The case has been especially difficult for law enforcement officials to crack and has blossomed into the largest homicide investigation in state history.

Authorities today arrested members of another family who knew the Rhodens — Billy and Angela Wagner and their sons George and Edward Wagner — in connection with the killings.

“We have obsessively focused on solving this case,” Pike County Sheriff Charles Reader said today at a news conference. “We have been patient when it has been painful to be, running down every lead, no matter how small. We’re the place that finds justice for victims and today is a big step on that path."

Attorneys for the Wagner family have declined media requests for comment on the case.

“The Wagners do eagerly look forward to their trial and to have their day in court so they can vindicate their names,” attorney John Kearson Clark wrote in a statement today. “The Wagners are also ever hopeful that in the ensuing months there will be a thorough vetting of all the facts. Moreover, we look forward to the day when the true culprits will be discovered and brought to justice for this terrible tragedy.”

The Wagners reportedly moved to Alaska in the months after the murders — they said to escape unfair scrutiny and accusations — but later returned to Pike County.

The entire time, investigators were chipping away at evidence linking them to the crime, authorities say.

“We promised that the day would come when arrests would be made in the pike County massacres,” DeWine said at the news conference today. “Today is that day.”

The investigation involved the Attorney General’s office, the Pike County Sheriff’s office, and other law enforcement agencies. DeWine says the last key piece of evidence was discovered Oct. 30 and was processed earlier this month. A grand jury in Pike County turned in the charges yesterday.

The four members of the Wagner family each face eight counts of aggravated murder, one for each victim. Those charges make them eligible for the death penalty. They also face conspiracy, aggravated burglary, engaging in corrupt activity, unauthorized use of property, obstruction of justice, forgery of child custody documents and other charges.

Rita Newcomb and Fredericka Wagner —  the mothers of Angela and Billy Wagner, respectively — were also arrested on cover-up charges related to the killings.

Authorities say the killers were painstaking and highly calculating in their preparations for the massacre, but also made small mistakes that lead to investigators to find them.

“All eight victims were killed in their own homes," DeWine said. "The killers knew the territory and meticulously planned these murders.

"We believe the evidence will show that the suspect spent months planning the crimes. They studied the victims’ habits and routines. They knew the layouts of their homes. They knew where they slept."

It’s not clear why authorities think the Wagners allegedly killed the Rhodens, but DeWine did give some clues.

“Because this is an open prosecution, we won’t be able to say much about motive, but you’ll see from the indictment that custody of the young child plays a role in this case," he said today. Edward Wagner is the father of one of Hanna Rhoden's children, who was three at time time of the killings.

DeWine says law enforcement personnel spent “tens of thousands of hours” on the case and traveled to 10 separate states, including Alaska.

“Our investigators and analysts have lived this case,” he said. “It has been all-consuming to them.”