Complainer in Chief vs. the Press

Trump has repeatedly encouraged his supporters to treat reporters as an "enemy of the people" — an exhortation he again fell back on after the Aug. 12 racist rally in Charlottesville, Va. 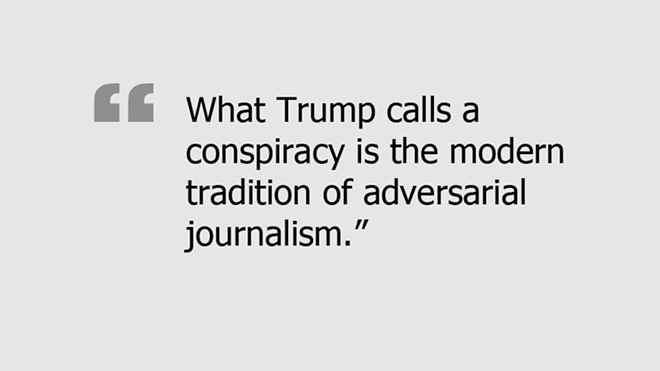 Insulting reporters is so old now that it’s hard to imagine Trump saying anything new.

Instead, he’s reduced to repeatedly urging supporters to treat reporters as the “enemy of the people.”

He fell back on that potentially lethal exhortation when he attacked accurate stories and fair comment about his response to the racist rally in Charlottesville, Va.

In that, our Complainer in Chief exceeded his previously dumbest flight from reality at a 2020 campaign rally in Phoenix.

He accused the news media of distorting what he said after the neo-Nazi rally left one anti-fascist protester dead.

Trump forgot that everyone who cared knew what he said in his official, presidential response and tweets.

In case someone missed his comment the first time, endless rebroadcasts made it difficult to avoid his vulgar initial response equating “both sides” in the confrontation.

It didn’t help when he added that there were “very fine people on both sides” among the klansmen and neo-Nazis as well as their opponents.

Journalists didn’t have to tell listeners or readers what he said. He took care of that.

Racists caught his approval and encouragement, just as they had many times during the primary and presidential campaigns. This time, however, it was less a dog whistle than shout-out.

But when this failure of moral authority blew up, Trump didn’t like the myriad news stories quoting judgmental public officials, public figures and corporate leaders.

Unlike many, Gary Cohn, the White House’s chief economic advisor, went public with his disgust.

Cohn told the Financial Times, “This administration can and must do better in consistently and unequivocally condemning these groups and do everything we can to heal the deep divisions that exist in our communities.”

Cohn didn’t leave it at that. He said he came under “enormous pressure” to resign after Trump equivocated in his denunciation of white supremacist groups.

Cohn said he chose not to join the exodus of CEOs from Trump boards but he felt “compelled to voice my distress over the events of the last two weeks. … Citizens standing up for equality and freedom can never be equated with white supremacists, neo-Nazis, and the KKK. As a Jewish American, I will not allow neo-Nazis ranting ‘Jews will not replace us’ to cause this Jew to leave his job. I feel deep empathy for all who have been targeted by these hate groups. We must all unite together against them.”

Meanwhile, Trump’s inability to accept responsibility when something goes wrong meant he had to blame someone for these angry responses.

Again, it was the news media, the frequent messenger of bad news, that provoked his spite.

Trump’s loose hold on reality worsened when he told the half-empty Phoenix room of supporters what he “really” said.

Oblivious to the irony of misquoting himself, he deleted his initial explosive phrase blaming “both sides” for neo-Nazi violence on Aug. 12 in Charlottesville.

Which of course was red meat to bruised reporters tired of his abuse. They could report another Trump misstatement or lie. (The New York Times and Washington Post have been tallying what they say are Trump’s lies, deceptions and deliberate misstatements since Jan. 20. Quibble as we might over definitions and choices, the number is more than 1,000.)

If Trump critics believe the blatant Phoenix self-censorship was a presidential pratfall, they miss the point. Loyal supporters already are receptive to Trump’s fact-free rants, irrespective of contradictory evidence.

Whether they believe what he says is another question. If they do, those voters live in a cacophony of cognitive dissonance, holding contradictory beliefs: Trump and facts.

They tell pollsters that they are ready to interpret just about any critical story, error or idiocy among the mainstream news media as further proof of a liberal conspiracy.

They already don’t believe what they hear from Democratic and Republican office holders. That’s his larger audience, including many who voted for him just to stick it to the political establishment of both parties.

And we all know how Americans love to blame a conspiracy as the obvious, simple answer to whatever complex problem vexes us at the moment.

For most of Trump’s life, “Communists” provided the conspiracy and reactionaries kept Americans fearful of subversion by the people we trusted.

What Trump calls a conspiracy is the modern tradition of adversarial journalism. Politicians and public figures understand it comes with the job.

Tabloids reported his affairs and marriages for decades, but that attention fed his narcissism.

Attention to his often grandiose, glitzy and sometimes failing business ventures was something he waived away. Like aging wives.

Were it not for his successful TV shows — all about him — he’d still be flogging used casinos in New Jersey.

Whatever he’d known before, serious adversarial journalism was new to him once he stepped into the presidential race in 2015.

He couldn’t have enjoyed the ridicule that first landed him on the entertainment pages, but he responded with threats and epithets as reporters began to take his aspiration seriously.

More important, he elicited and encouraged supporters to treat reporters with contempt that bordered on incitement to violence.

I’m not sure he cared whether conservative publications went after his investments, his inner circle and his fitness for office. He’s not a conservative and he’s not a Republican. So what?

We don’t know what aides tell him the news media are reporting or saying. It would take a brave lackey to knowingly provoke his anger.

We don’t even know if he followed breitbart.com or relied on adviser Steve Bannon to tell him what the alt-right site was saying.