After some state reps claimed vaccines can turn humans magnetic (really), medical experts implored lawmakers to reconsider approving a new law that would prohibit vaccination mandates for students, hospital employees and others.

Pediatricians and other infectious disease experts issued clear warnings about a proposed bill to weaken Ohio’s vaccination laws: Doing so would put children’s lives at risk and potentially expose the state to a resurgence of deadly viruses.

A half-dozen medical experts implored lawmakers to reconsider approving a new law that would prohibit vaccine mandates for Ohio students as well as employees of hospitals, long-term care facilities and other businesses.

The expert testimony on House Bill 248 followed a wave of unfriendly viral attention the Ohio House Health Committee received over untrue claims about the COVID-19 vaccine made at a June 8 hearing. An invited guest of HB 248 sponsor Rep. Jennifer Gross (R-West Chester) testified the vaccines caused human magnetism; another person testifying later attempted unsuccessfully to prove the theory in front of lawmakers.

Videos of the hearing posted by the Ohio Capital Journal went viral, with the bill and its associated magnetism claims being widely covered in a number of national publications and mocked by late night comedy hosts.

Committee Chairman Scott Lipps (R-Franklin) began the subsequent hearing on Tuesday by acknowledging the false claims from a week before, but defending his committee providing a platform to those peddling them.

“For the (legislative) process to work, the system requires that all opinions be heard,” Lipps said. “Even those that make you angry, make you cringe, make you question what you thought you knew, and especially, those that disagree with you.”

Those claims have already been debunked, but several of the health experts were asked by Democrats to again on Tuesday dispel the theories that vaccines cause magnetism or lead to harmful transmission impacting unvaccinated people.

Dr. John Crow, the associated chief medical officer of the Akron Children’s Hospital, was among those who defended the vaccine requirements of medical care facilities and schools as being necessary for public health. Crow noted his hospital requires employees to receive an annual flu shot and by doing so “we greatly reduce the risk of an employee transmitting a communicable disease to a child or family member seeking their care, a scenario that could have tragic consequences.”

HB 248, as written, would not allow that to occur in future years. Hospital leaders would not be able to mandate — or even ask — that employees get vaccinated.

Public schools already provide exemptions for religious and health reasons, which are noted on a student’s school vaccine paperwork. HB 248 would require schools to promote these vaccine exemptions “in the same timing and manner, including text size and font, as it provides notice of the requirements.”

Republicans on the House Health Committee have grappled with centering the debate on personal liberties versus a matter of public health.

Photo: The Ohio Channel
Rep. Jennifer Gross (R-West Chester) is seen previously speaking to the House Health Committee. She is the main sponsor for House bill 248.
“This is not a scientific bill,” Gross has said. “This is a freedom bill.”

On Tuesday, however, Gross pressed the health experts on the efficacy of vaccines. She questioned a Dayton pediatrician on how much money doctors make from providing vaccines and grilled a Cleveland pediatric infection control director about the alleged deaths resulting from people taking the COVID-19 shots.

The latter witness, Dr. Claudia Hoyen of the University Hospital Rainbow Babies & Children’s Hospital, replied that the data surrounding those alleged deaths are unconfirmed. She characterized HB 248 as undermining decades of public immunity brought about by the widespread use of vaccines for diseases such as measles, mumps and hepatitis.

Chairman Lipps tried at one point to steer the conversation back to the issue of “medical freedom,” claiming the committee had “been off base a little while” for debating the vaccine’s effectiveness. But he too asked critical questions about the vaccine to the experts, claiming several of those testifying to be hypocritical for supporting patients’ privacy rights while also approving of vaccine mandates in medical facilities.

Dr. Kristin Englund, president of the Academy of Medicine of Cleveland & Northern Ohio as well as an infectious disease doctor for the Cleveland Clinic, was among those who spoke out against HB 248. Lipps pressed Englund on the speed by which the COVID-19 vaccine was approved for public use and wondered whether vaccine mandates for public health’s sake took into account those who claimed to be harmed by vaccines. 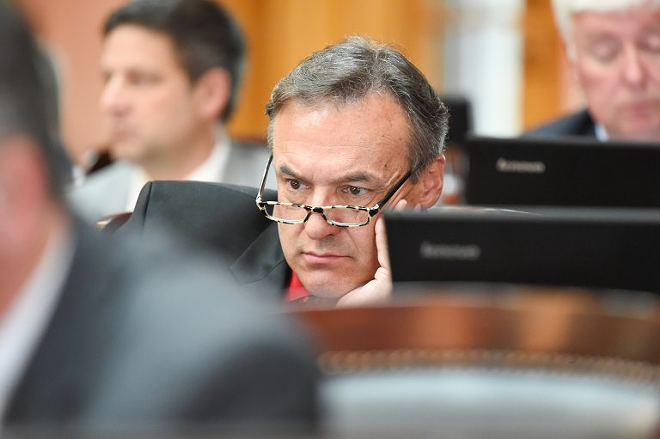 Englund acknowledged that vaccine injury does happen in rare instances, but still emphasized that vaccines have saved millions of lives throughout American society.

“Unbelievable,” Lipps said in concluding Englund’s time at the podium. “Quite frankly, unbelievable.”

After the hearing ended, Lipps told the Ohio Capital Journal that the bill needs some additional work before it can progress further. His preference is for the bill language to be narrowed down from including all vaccines. Gross said during the hearing she would be open to negotiating with other lawmakers to improve the bill.

Rep. Beth Liston (D-Upper Arlington) described being pleased with the testimony provided by medical experts. Herself a doctor at Nationwide Children’s Hospital, Liston said it was important they help explain the health impacts HB 248 could have on the state.