What a strange, surreal, racist, misogynistic trip it’s been and Tracie Marie Hunter seems picked directly from Central Casting for the starring role of the wholly mysterious and largely misunderstood black Joan of Arc

In a July morning downpour, I’m being held hostage in what dialysis patients call a “welfare van” on my way from East Walnut Hills to a dialysis clinic in Silverton.

By downtown Norwood, I’ve listened to my obstreperous driver — also a loud, profane black woman — deliver to a disembodied speakerphone voice the news in that breathless way black women do when we’re gossiping about one another.

“You seen on Facebook where Tracie Hunter fell out in court and they had to carry her out — that bitch just wanted to make national news one last time before she went to jail.”

“Ain’t nothin’ wrong with her ass they gave her six months and she’ll prolly only do three.”

“Yeah, that bitch fell out.” She laughed sardonically and coughed a hard, smoker’s cough. “Wit’ her crazy ass.”

And there it is: The (former) judge being (forever) judged.

Even now, at the end.

The end of a test of the limits of what the county’s white power brokers let pass for justice, at the end of at least three defense attorneys, a slew of hearings, a couple of common pleas court judges (the last — Patrick T. Dinkelacker — with his own checkered past), a four-year delay, the white-hot lights of the city’s — and the nation’s and international — media, a slew of tilted and myopic stories in The Enquirer, and a breathtaking and groundbreaking sweep to the bench despite the turned back of her own Democratic Party.

What a strange, surreal, racist, misogynistic trip it’s been and Tracie Marie Hunter seems picked directly from Central Casting for the starring role of the wholly mysterious and largely misunderstood black Joan of Arc; the courthouse steps are her burning stake.

Call the van ride what you need to: a black-on-black hate crime? Three black women looking at, speculating over and harshly judging another from a distance?

Whatever it was, I kept my mouth shut.

Only one black woman in that triumvirate had access to and an audience with the beleaguered former Hamilton County Juvenile Court Judge.

For a beefy and meandering August 2014 Cincinnati Magazine feature profile, I spent nearly one year following Hunter’s literal and figurative trials — in juvenile court and the media — as she tried settling onto the bench never before occupied by a woman or a black person while she simultaneously answered to a single charge of having unlawful interest in a public contract for giving confidential papers allegedly concerning a juvenile to her brother, Stephen Edward Jr., then a juvenile court employee in the process of being fired.

Stephen allegedly hit a juvenile and then, during his termination process, asked his big sister for paperwork containing the juvenile’s background. 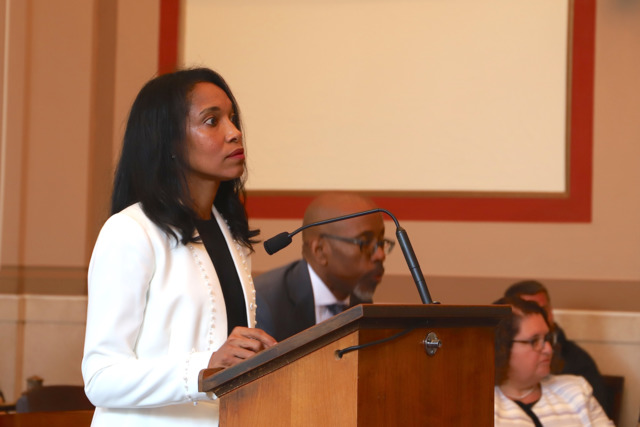 Despite the seething brutality of the speakerphone woman’s black Facebook grapevine recap of Hunter’s courtroom au revoir, she landed squarely on two true signifiers. First, that Hunter may very well have wanted to leave the courtroom of Judge Dinkelacker like the self-styled martyr she’s become to so many — limp, heels dragging, doe-eyed with a stare fixed on some far-off person or goal.

Secondly, spectacularly and unlike any other elected public official before or since, Hunter’s sanity is and has been open for debate.

The collision of her nearly mystical faith in God that frightens the bejesus out of the uninitiated and any palpable fissure in her sanity collide at a devastating one-two punch.

On May 23, 1986, her 17-year-old brother, Edward Louis, then a Forest Park High School student, killed himself on a public street in Glendale surrounded by cops after he’d robbed several stores.

Seventeen months later, in October 1987, Hunter was seriously injured — including head and facial injuries and temporary paralysis — when a car she was driving swerved off a rural Oxford road to avoid hitting a deer. Other Miami University students were in the car. One died.

Hunter, raised as a staunch, private-school Catholic girl, told me in her church basement that she considers herself saved by God to do larger work, to hold a bigger profile. She said God told her to run for the bench and He told her she’d won it even when it seemed votes and odds were stacked against her.

“God is not a man that should lie.”

Hunter is reminiscent of Perpetua, the Christian martyr jailed by the Romans for refusing to worship false gods. After her father shunned and beat her, Perpetua steadfastly thanked God anyway.

To the mostly women and all-black congregants of Western Hills Brethren In Christ Church where Hunter has pastored since 2009, faith is neither funny nor a sign of insanity. And here’s where shit swirling around Hunter goes sideways: perception and reality — her perception of her selves and realities and our perception of all of it.

And when I say “our,” I mean all of us — black, white, powerful, disenfranchised, political outsiders, onlookers, pundits and radio talk show wingnuts, and men and women alike.

If Oprah© ever asks me: “What’s one thing you know for sure?” I’d tell her straight: I know black folks cannot tell public truths about ourselves.

Harder (and stranger) still we cannot reconcile those truths with our love for one another.

In other words, we’ve yet to learn to love a black person who’s done wrong and, indeed, should be punished.

We’ve convinced ourselves to either bathe our heroes in adoration and idol worship or hate, dismiss and slander them. In the decree of social media, we “cancel” them.

Hunter did wrong and so did her brother.

His punishment was swift. He lost his job.

Hers goes on ad nauseam.

The loss of her law license, her judgeship, a reasonable fine and court-approved community service would’ve been enough.

However, she refused to kiss the rings of sitting black judges in this county; never even went to visit them. During my reporting for the magazine profile, some blacks whispered in breathless amazement how she hadn’t taken the time to curry their favor.

Who knows? Maybe before she was dragged to the fire, they could’ve helped or shielded her in some way.

But blacks aren’t the only blame-bearers.

The white, male string- and lever-pullers in Hamilton County have just about succeeded in destroying this woman.

The court’s handling of Hunter is nothing short of flagellation. She’s been publicly dressed down, mocked, demeaned, subjugated, deconstructed, paternally admonished and sent away.

The final blow was during Dinkelacker’s sentencing. The judge read into court record a letter from Hamilton County Prosecutor Joe Deters who smugly and with disingenuous empathy suggested delaying Hunter’s sentence while she be referred for evaluation to investigate “her stability to serve jail time.”

The prosecutor had the nerve to register surprise: Why wouldn’t Hunter try to save herself and lessen the severity of jail time by accepting the evaluation?

This is but one of the ways black women are rendered — and sometimes do actually become — insane in America.

Nothing about Hunter is, was or ever will be easy. Neither is being a black woman in America. Might even be harder being one in Hamilton County.