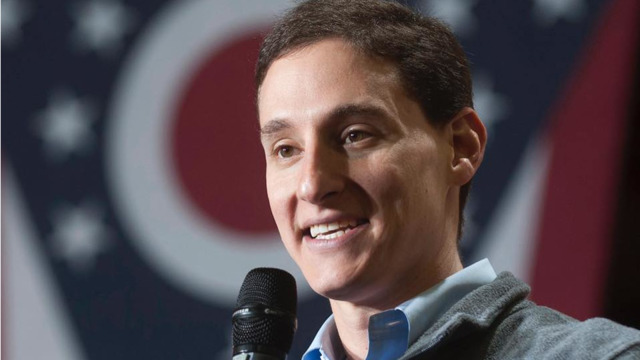 Photo: facebook.com/joshmandel
Josh Mandel still needs the attention, except for his employees.

Staffers for GOP Ohio Senate hopeful Josh Mandel's campaign have been quitting because of how his campaign finance director — who also is his girlfriend — is treating people, reports say.

The Columbus Dispatch reports that three staff members said adios to the campaign in the spring, and sources tell the newspaper that it's due to the tense, potentially abusive environment that campaign finance director Rachel Wilson creates.

According to the Dispatch, two of the three staffers who quit did so because of Wilson's demand for regular 12-hour workdays and her berating employees. "Finance staff members cried in the office on a regular basis," a source told the Dispatch.

The newspaper also reports that Mandel and Wilson frequently had "blow-out arguments" about campaign issues.

Mandel and Wilson began dating in August of last year, campaign manager Scott Guthrie tells the Dispatch. Mandel is Wilson's boss within the campaign. From the Dispatch:

One source said neither Mandel nor Guthrie stopped Wilson’s behavior even though both were aware of it for weeks. Finance staff members cried in the office on a regular basis, the source said.

Texts exchanged among Mandel campaign staff and reviewed by USA TODAY Network Ohio reporters confirm that Guthrie and Mandel knew of Wilson’s behavior but did not intervene.

The source said Mandel and Wilson had blow-out arguments often laced with obscenities over campaign-related issues. "They’d go out in the hallway and scream at each other," the source said.

Mandel and Ilana Mandel, his former wife of 12 years, filed for divorce in April 2020, Yahoo News says. The far-right politician shared divorce documents with reporters in February, but the Dispatch says that the full file remains sealed in Ashland County in northeastern Ohio.

Mandel has announced his intent to run for the Ohio Senate seat that Sen. Rob Portman will vacate in 2022. He is known for anti-Muslim propaganda and for supporting former U.S. President Donald Trump. Earlier this year, CityBeat’s sister newspaper Cleveland Scene investigated Mandel for a scathing cover story.

In early June, Mandel was among a group of Republicans who burned their facial masks — which were and still are recommended by doctors and scientists as protection from coronavirus — as Ohio's COVID-19 health orders expired. In April, Mandel claimed that public health practices were like "Nazi Germany."

Mandel routinely tries to attract attention through sensational means, such as creating giant "freedom" text art on social media and then claiming that social media platforms are censoring him.