After a long legal battle, the 37-year-old spurned lover of famous primate Koko is back at the Cincinnati Zoo. It may be several weeks before zoo visitors can see him, however. 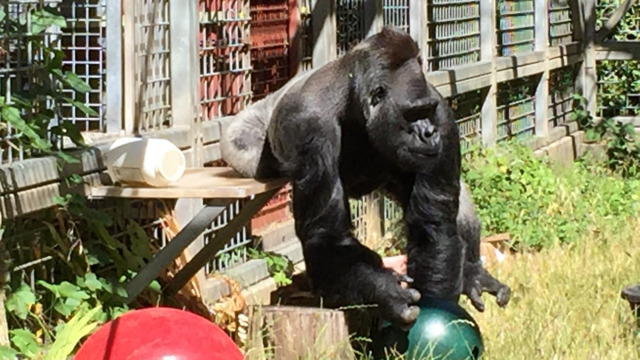 The 37-year-old silverback gorilla at the center of a long-running dispute between the Cincinnati Zoo and the California-based Gorilla Foundation is back home, the Zoo announced today.

Ndume had lived at the Foundation since 1991, when the Cincinnati Zoo loaned him out as a companion for Koko, a gorilla famous for her apparent ability to communicate via sign language. Koko and Ndume didn't hit it off, however, and lived separately.

The agreement between the Zoo and the Foundation stipulated that Ndume would be returned to Cincinnati when Koko passed away. She died last year, leaving Ndume the last remaining gorilla at the Foundation. The Zoo sought his return last October, sparking a legal battle as the Foundation fought to keep him. The Foundation argued that transporting Ndume would endanger his health because he has a digestive illness.

In February, a California judge ordered Ndume's return by May, but his transfer was delayed on multiple occasions. The same California judge eventually stepped in, ordering Ndume be returned by June 13.

Zoo officials say he arrived safely, but that it may be a number of weeks before the public can see him.

"We are thrilled that Ndume is finally here," Cincinnati Zoo Director Thane Maynard said in a statement today. "We've been preparing for his arrival for many months and are ready to offer him an environment, schedule and social status that works for him."