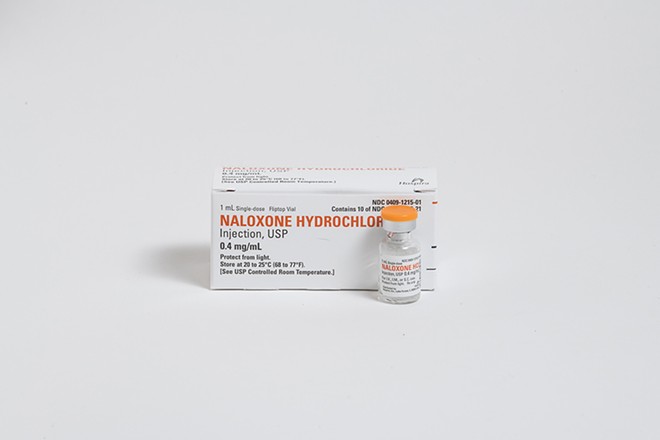 Photo: Next Distro, Unsplash
Naloxone can help reverse an opioid overdose.
The latest overdose data released last week by the U.S. Centers for Disease Control and Prevention (CDC) confirms that overdose deaths that had flattened out starting in 2017 are once again on the rise. Ohio went from 4,410 overdoses last year to 5,585 this year according to the CDC numbers, an increase of 26.6%. In 1999, there were 327 overdose deaths in Ohio, according to the Ohio Department of Health.

While Ohio had seen some headway against the overdose and addiction crises, numbers in recent years have been trending in the wrong direction. This past year, Franklin County led the state with 852 overdoses in the latest data. By contrast, the number of drug overdose deaths in 2017 in Franklin County was 465.

In his award-winning 2015 book on the prescription pill addiction, Dreamland: The True Tale of America’s Opiate Epidemic, author Sam Quinones focused on Ohio as one of the early spots where the opioid addiction problem took hold. In fact, "Dreamland" was the name of a closed city pool in Portsmouth, Ohio, which symbolized for Quinones how communities fighting the epidemic were losing their ability to use long-held standards to fight it.

The United States has broken the six-figure overdose number, roughly doubling the 49,387 national drug overdose deaths in 2015 to 100,306 in 2021. The CDC reports yearly numbers in an April-to-March timeframe, rather than the general January through December standard used by most local governments. In the 2020 data released last year, there were 78,056 overdoses in the U.S. This year’s numbers represent a nearly 29% increase over last.

An analysis last year from the Ohio Attorney General’s office showed Scioto County, home of Portsmouth, Ohio, was leading the state in overdose deaths based on ODs related to population size. The CDC numbers back that up: Scioto County, with 111 deaths and population of 74,000, had twice as many per capita ODs as Franklin County (852 deaths/1.32 million pop.), and three times as many as Cuyahoga County (546 deaths, 1.26 million pop.)

“It’s not surprising to hear that overdose deaths are up,” said Max Liles with The Counseling Center in Portsmouth said earlier this year. “It’s not like we were ever at a point in the game where we were winning the game. This is an invasive problem, this is chronic problem, this is a progressive disease. It’s only going to get worse.”

The trend in overdose deaths was that they had been declining since 2017 both nationally and statewide. In Cuyahoga County, for example (where Cleveland is located), the ODs went from 727 in 2017 to 549 in 2020.

But Cuyahoga County is projecting them to hit 750 this year, and many feel the pandemic played a big role in that. Addiction meetings (like Alcoholics Anonymous) have had a hard time meeting physically in public, drug courts and hospital care have been restricted, and the stay-at-home status and job uncertainty have fueled the drug addiction trap.

“(People are) dealing with the isolation they felt; they’re dealing with the loss of jobs,” said Scott Osiecki recently, who serves as the CEO of the Alcohol, Drug Addiction and Mental Health Services (ADAMHS) Board of Cuyahoga County. “They’re not looking to take fentanyl. They’re not even looking to take an opioid, and it is in there and that’s what’s causing the opioid deaths to increase.”

While Ohio is close to the national numbers in terms of drug overdose increases, the state is going against the grain in one major area. The CDC reported in March of this year that urban and suburban counties were growing in ODs per capita much more than rural counties are.

But in Ohio, the per capita OD numbers in smaller counties like Scioto, Columbiana, Adams Lawrence, and Gallia are much bigger than the big counties like Cuyahoga (Cleveland), Summit (Akron), Stark (Canton), and Hamilton (Cincinnati). Larger suburban counties (Lake, Geauga, Clermont, Delaware) are also much lower than the smaller, more rural counties.

A new report released last week by the OHIO Alliance for Population Health shows a troubling and dangerous shift in drug use trends amongst Ohioans. Over the last several years, overdoses have continued to rise and so has the use and blending in of the dangerous drug fentanyl in many other drugs.

“There is a tenfold range in overdose deaths based on counties. There are some counties with very high rates and some with very low rates. So, you wonder why,” said Dr. Joe Gay, the retired executive director of Health Recovery Services in Athens and a staff member with the Alliance. “We’re exploring what the basis of these differences is. Poverty is an issue, community intactness is an issue, but it’s still not entirely clear what the driving factors are.

“For a little more than a decade there has been a significant problem with opioids and overdoses. So, that there was an overdose problem was not a surprise at all,” Gay said. “I would say to a degree fentanyl caught us not completely off guard … but it was a little surprising how bad it’s gotten now.”

Will the stabilization of the COVID-19 death rate because of increased vaccination, and perhaps straightening out of the employment trends, mean that the drug ODs might go back into their decline phases? Hard to say, but the politicians and treatment experts don’t think so.

Retiring Ohio U.S. Sen. Rob Portman issued a statement that said, “According to the CDC, the numbers indicate that 2021 will look even worse, reaffirming what I’ve said many times before — the drug and addiction epidemic in this country is not only resurgent, but far worse than ever before.”

He also said that Congress needs to pass a bill he’s introduced that will provide more for drug addiction treatment, what he calls, “sweeping, bipartisan legislation that will bolster evidence-based programs, expand treatment options, and provide communities with the resources they need to save lives.”

Lisa Mertz, CEO for the Addiction Services Council in Cincinnati says they have been overwhelmed with calls for help “People are just struggling with the isolation and we’re just struggling to catch up to provide services,” she said in an interview in response to the high CDC numbers.

“One of the women that I love that passed (on) kind of found herself trapped in a small apartment with a 2-year-old for months and months and months and I think it was ultimately her demise,” Mertz said. “If we don’t respond now or if we make people come to us instead of going to them, we never see them and a week later we see their obituary.”