Renovations Begin on Downtown Branch of the Cincinnati Public Library

The interior of the downtown branch's South Building will get a lighter new look, while the Vine Street plaza later will become more exciting for pedestrians. 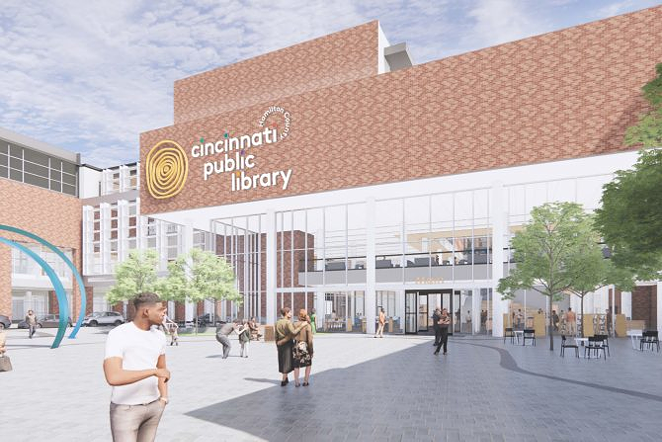 You might want to pardon employees of the downtown branch of the Cincinnati and Hamilton County Public Library if they don’t follow their silence guidelines over the next 18 months.

According to a letter addressed to library patrons from Library Director Paula Brehm-Heeger, the first stage of the Cincinnati Public Library’s plan to improve and renovate the Downtown branch has begun.

It appears that the majority of the work will be taking place in the branch’s South Building, including maintenance and redecoration. Mock-ups available on the library’s website show that the interior will be given a new, lighter look.

To accommodate for these renovations, the North building will take the brunt of the Main Library’s service offerings while the work is being completed, Brehm-Heeger's letter says. In order to accommodate for the disruption, the branch will pause its evening hours until July while opening its drive-thru on Sundays instead.

Future plans appear to move past indoor maintenance and into improving the outside areas of the building. The plazas in front of both the North and South buildings will be renovated in order to make them “more active, inviting, and a part of the growing focus on pedestrian spaces in downtown’s Central Business District,” the letter says.

The current plan for these plazas includes lowering them, which means a building underneath the South Vine plaza will be filled starting this fall. The outdoor project will begin later this year and extend into 2023.

All improvements are funded with the help of a $1 million dollar levy passed by voters in 2018.

For more information about the library's renovations, read Brehm-Heeger's letter.