The report is more than a plan to finish Cincinnati's most famous unfinished business and create a unified transit system. It also provides a rare, detailed snapshot into the city's transit history. It's one of Cincinnati's most famous — or infamous — notes of trivia. The Queen City has a few miles of unfinished subway tunnels underneath its major thoroughfare and former canal, Central Parkway.

The First World War, the changing winds of politics and other factors conspired to mothball the enormous project in 1928, leaving generations to look at the doors to the subway tunnels sitting sealed up along side I-75 and wonder what could have been.

Luckily, we don't have to wonder completely in the dark. An exhaustive 166-page report completed by New York-based engineering consultants the Beeler Organization in 1927  gave city officials a road map — err, rail map, maybe — for finishing the subway.

In addition to blueprints for finishing the subway, the Beeler plan also gave the city advice on consolidating and combining the city's other transit systems, namely its interurban rail service, its streetcar system and the city's nascent independent bus services to avoid duplication of services.

Some of the Beeler report's observations sound eerily familiar.

"Cincinnati needs faster, more dependable and more modern local transportation facilities," the report concludes. It also notes that the city had already sunk more than $6 million into the incomplete subway. The report provides an ambitious plan that could have changed Cincinnati's trajectory, at least when it comes to public transit — spend $10.6 million in 1927 dollars (about $150 million in today's money) to complete the subway system and take control of those various bus services, interurban rail companies and the streetcar system. That system would cost about $8 million a year to operate by 1935, the report suggests — about $118 million in today's dollars. But it would generate roughly $11 million in revenue, leading to a small surplus by 1933.

"If Cincinnati is to have rapid transit it must be shown that it is practicable to operate it to the benefit of the community," the Beeler report reads. "The first consideration, therefore, is to ascertain the best possible plan and what the results of its adoption will accomplish."

The plan calls for subway service all the way out to Oakley and contemplates various ways to build a loop through some of the city's most populous areas, including parts with devilish topography like Mount Auburn and Walnut Hills. It also urges an extension from Central Parkway and Walnut Streets — the farthest south the current tunnels go — to a downtown station underneath Fountain Square, predicting that some 40 percent of subway ridership would depend on that extension.

The report also recommends putting a subway station at Knowlton's Corner in what we now call Northside, noting that the area is one of the city's busiest. The report estimated 4 million people a year would use the station.

In a few places, the plan shows a focus on walkability, density and traffic safety that seems wrenched from a 21st century urbanist's Twitter feed. In other passages, it's all business, pouring over ridership numbers, population figures, fare projections and other data to make its case.

The upshot: a system that would have delivered tens upon tens of millions of rides a year faster than buses or the city's streetcar at a cost that, over time, would have paid for itself.

Perhaps those projections were rosy — the Great Depression was right around the corner, after all, car ownership was still a fraction of what it would be 30 years later and the city's population had yet to peak and then decline.

But it presents a moment in time and shows that many of the things modern fans of cities advocate for have precedents in Cincinnati's history.

The report is a snapshot of a future that never was, but also a look into Cincinnati's history that we rarely see in such detail.

There are a million fascinating tidbits for transit nerds in the Beeler report, including these:

• Those independent bus services, for example, consisted of 16 routes operated by five separate companies driving about 90 buses at the time of the report.

• That was just for buses serving inside Cincinnati — another 23 bus companies connecting the city to other places operated from a hub at Government Square, today the central hub for Cincinnati's Metro bus service.

• There were 39 streetcar routes at the time of the report.

•  Transit ridership peaked in 1917 in Cincinnati at roughly 160 million rides spread among buses and streetcars.

The report also sheds light on how much denser Cincinnati, then with a population of about 410,000 people, was at the time.

Cincinnati was the population center of gravity of the region at the time, and most of that population was in the center of the city. Take a look at this density map on page 47 of the report: 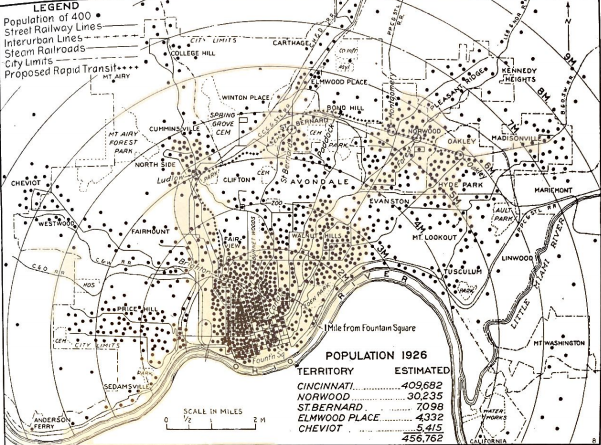 Cincinnati Subway Report 1927
A map of where people lived in Cincinnati in 1926.

That's not how Greater Cincinnati's population looks today, obviously. But the need for better transit options has been a nearly-universal agreement among city officials, the business community and everyday riders (like this reporter) who spend long waits at bus stops.

Voters bypassed an even more comprehensive contemporary plan for a unified transit system called MetroMoves by a large margin in 2002 — well before the region reached its near-consensus that its transit system needs help.

Hamilton County voters are currently in the midst of deciding on Issue 7 — a more moderate (but more modern) plan to remake bus service funded by a .8 percent county sales tax increase and a .3 percent reduction in Cincinnati's earnings tax. That plan has broad support from elected officials across the political spectrum and transit advocates — though it's unclear if enough voters will hop on board.

As Hamilton County waits for the results of a primary rescheduled due to COVID-19, it's a great time to take a trip back more than 90 years to see how transit worked in Cincinnati and what kinds of plans people were dreaming up. You can peruse the full Beeler report here.