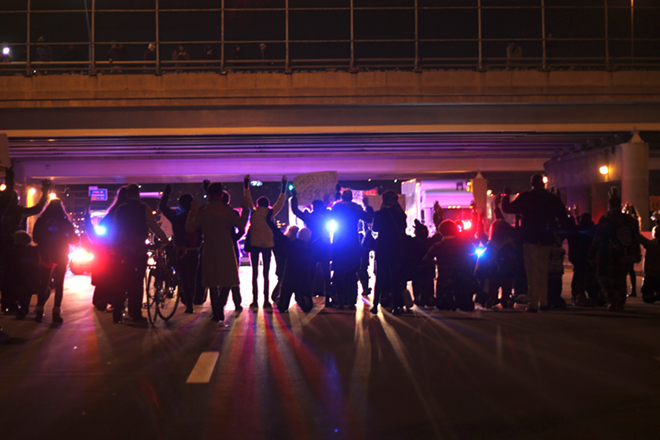 Protesters briefly shut down I-75 during a rally remembering those killed in police shootings Nov. 25.

UPDATED Nov. 28, 12:45 PM: Judge Ted Berry waived the tracking device requirement for the protesters today, and those who posted bail (all but one) should be released in the next few hours.

Original Post: Some of the 15 protesters arrested during Tuesday’s march through downtown Cincinnati in solidarity with Ferguson, Mo. paid bail the next day. But while most folks were at home enjoying Thanksgiving Thursday, they were still in the Hamilton County Justice Center because some county offices are closed.

The march drew as many as 300 people during its nearly three-hour duration. During that time, at least 100 protesters streamed onto I-75, bringing traffic to a halt for a few minutes. Police, who had blocked traffic in the northbound lane of the highway, ordered protesters off under threat of arrest.

Those who didn’t leave fast enough ended up in jail.

The protesters were held without bond overnight and arraigned at 12:30 p.m. Wednesday. Bond for the eight charged with shutting down I-75 was set at $3,000. According to Hamilton County Criminal Court documents, two of those arrested, Liz Cambron and Aalap Bommaraju, paid bail early that afternoon. But they’ll be in jail over Thanksgiving, and maybe until Monday, their attorney Joe Russell says.

Judge Melissa Powers, the presiding judge, deemed the arrested protesters flight risks and ordered they be fitted with electronic monitoring devices. But the office that provides the devices closed at noon today and won’t reopen until next week.

“I don’t undersand how my clients are flight risks,” Russell said of Cambron and Bommaraju. “They aren’t the kind of people who want to get anyone run over.” Cambron is a graduate student at University of Illinois Chicago, and Bommaraju is a health worker pursuing his PhD at UC.

He says the two weren’t acting recklessly and were merely exercising their first amendment rights.

The rest of the group arrested on I-75 look to be in a similar situation. Brandon Geary, Robert Fairbanks, Hilliard Herring, Zachary Lucas, Cerissa Newbill and Rhonda Shaw were also arrested on the highway and have been ordered to wear the tracking devices after release on bond.

Representatives with the Hamilton County Clerk of Courts said they could not provide any information on the cases during phone calls earlier today.

Russell says it’s not necessarily the judge’s fault the situation has happened. Others, however, feel like the delay was meant to send a message to future protesters.

“The reason they’re still in jail is because the county doesn’t have the electronic monitoring devices available,” Russel said. He was in court Friday morning working to get the two released. A vigil held Nov. 27 for protesters arrested during a Ferguson solidarity march still in jail after posting bond
Nick Swartsell

A vigil asking the court to release the protesters on bond drew a crowd of about 35 people Thanksgiving day, including family members of some of the protesters. "He didn't even know he wasn't going home," said Evan Geary, brother of Brandon Geary, who also posted bond. "My parents had to tell him he wasn't going home. I'm surprised my parents didn't come. They were very happy this was happening," he said of the vigil.

Both Bommaraju and Cambron, along with others who were arrested after entering I-75, are charged with disorderly conduct, a minor misdemeanor, and inducing panic. That charge is usually a first-degree misdemeanor, but could be a fifth or fourth degree felony if a prosecutor finds that significant “economic damage” was done in the commission of the offense.