White-on-white silence is my simple interpretation of a dynamic I’ve observed when engaging with some well-intentioned white folks who consider themselves card-carrying “allies” for people of color. 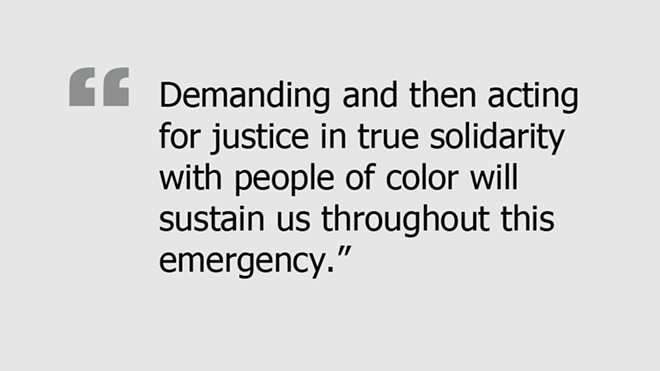 There aren’t many laughable takeaways following Decision 2016, even as it draws on with new revelations about Russian influence, CIA and FBI subplots and a very Trump-esque victory tour making the rounds.

Still, after intense reflection, I have concluded that one hilarious subplot from this post-election purgatory is the persisting white disbelief in the electorate’s outcome.

Although the left’s collective mourning seems to have subsided greatly, the question “How did we get here?” privately and publicly continues to come up.

There are a multitude of answers to this naive yet fascinating question.

There has been an overall rejection of the political establishment and political elite that maintain systems of status quo. Another exceptional and acceptable response to understanding these times is to understand the history of globalized and domestically state-sanctioned white supremacy.

I believe the atmosphere can be partially attributed to intentionally sustained white-on-white silence. (I promise you I’m not making another case for an abstract academic concept.)

White-on-white silence is my simple interpretation of a dynamic I’ve observed when engaging with some well-intentioned white folks who consider themselves card-carrying “allies” for people of color. In an attempt to distance oneself from traditionally racist ideas, behaviors and persons, contemporary white allies have permanently and understandably disengaged from their own families, friends, professional affiliates, etc.

The unintended consequence of this further social segmentation leaves those inundated by racist society and their own internalized beliefs of racial superiority being left to their own devices.

This is not to infantilize whites who express old-school outright white nationalism or those who engage in colorblind racism. Colorblind racism is described by Psychology Today as “the racial ideology that posits the best way to end discrimination is by treating individuals as equally as possible, without regard to race, culture, or ethnicity.”

This is simply a sober assessment that anti-racist whites sometimes merely distance themselves from non-anti-racist individuals in an environment where systemic inaction persists, racist institutions are left intact and the cycle continues.

I think the time has come for whites who consider themselves enemies of white supremacy to undertake the unsexy yet necessary task of confronting and educating their white peers. White people who have spent the last few weeks wallowing in self-pity and disillusionment can now call themselves to action to commit to challenging other whites within their own reach, committing to ending white-on white silence that at least tacitly allows racism.

Let me be clear: this is not the moral, political, social or professional responsibility of people of color.

Nevermind that social stratification, housing and school segregation already limit the literal engagement people of color have with white folks on a daily basis. It is not the job of those experiencing oppression to appeal to moral sensibilities of those benefiting from their subjugation.

There is a difference between creating space for marginalized people to speak truth to power, versus expecting them to educate an unprepared/uninterested hostile audience. While professing solidarity to maligned people is admirable, the eradication of injustice requires disruption of oppressive ideas and behaviors which are too often viewed as normative. There’s no time like the present to begin the work of establishing productive discomfort in advance of whatever lies ahead.

While a Hillary Clinton victory certainly would not have signaled an end to oppressive institutions (see President Obama) and/or individuals, the panic deriving from the Trump apocalypse presents an extraordinary opportunity for white people to leverage the access non-whites do not have.

Anti-racist whites should utilize this period to denounce pervasive white moderate mentality, which promotes indifference in a period of overwhelming moral crisis, insisting that those transformed dedicate energy to destroying pillars of racism.

Please do not confuse this call to action as a plea for white saviors. If you’re unfamiliar with the term, white saviorism is the often-subconscious idea that solving complex social issues endured by people of color requires the aid of an inspirational, well-intended white person (hint: they’re probably wearing a safety pin).

For additional insight please see or unsee the films Dangerous Minds, The Blind Side, Hard Ball or anything starring a famed cisgender white woman under 30.  The narrative that pervades these films is that charity is the solution to marginalization.

Lilla Watson, who is described by the Women’s History Network as as an activist and intellectual, an artist and academic, a writer and a poet, speaks to this misunderstood notion of saviorism. “If you have come here to help me, you are wasting your time,” she says. “But if you have come because your liberation is bound up with mine, then let us work together.”

This popularly referenced quote expresses what is required of those who wish to act in true solidarity of the oppressed without undermining the dignity and agency of the underprivileged.

White folks can resist the urge to solely turn to default acts of charity in this climate. Charity is often urgent, but demanding and then acting for justice in true solidarity with people of color will sustain us throughout this emergency.

Given the array of white people who didn’t vote for that guy and/or have non-privileged identities (such as experiencing poverty, being differently abled), many readers are likely indignantly wondering why I am assigning primary responsibility to address existing and upcoming social injustices to white people.

This time, the obvious answer is the answer: White voters literally and figuratively disproportionality supported a demagogue. Across gender, education and class, whiteness was prioritized over most white folks’ self-interest. Instead of miring in any discomfort elicited from this analysis, consider it an invitation to use the whiteness that already advantages you.

Your privilege has the ability to not simply silence but to eradicate the hate implicitly and explicitly espoused, the oppression that has been promised. White folks, will you pledge to resisting aiding and abetting oppression not just over the next four years, but in the foreseeable future? The answer will be demonstrated in your actions today.