"I don’t know that most people know this exists in the world, and they’d be better off being exposed to it," the artist says.

Photo: provided by Rachel Rampleman
"Life Is Drag" at Wave Pool features both video portraits and images of video stills.

Two days before the opening night of her new exhibit, artist Rachel Rampleman is working late at Wave Pool gallery in Camp Washington. She adjusts her camera and lighting, preparing to shoot a video portrait of local alternative-drag artist Aura Tannen.

Currently on display at Wave Pool through April 30, Life Is Drag features monitors screening video portraits of performers as well as a wall of more than 200 video stills. Rampleman says the archive will grow throughout her time at Wave Pool; she was awarded a residency at the arts nonprofit through March and April. She will be capturing performances from the likes of Smoke & Queers Burlesque Troupe and ODD Presents Alternative Drag Haus — two local alt-drag and neo-burlesque companies — until the closing reception with the hope of spotlighting as many performers as she can with her lens-based artistry.

“This is really fun and inspiring,” Rampleman says. “These people are just the most interesting, brave, inspiring, creative, kind, inclusive, welcoming people I’ve ever met. So I thought let’s document what they are doing, because I felt that what they were doing was really valid and vibrant and interesting, and more people should see it. I don’t know that most people know this exists in the world, and they’d be better off being exposed to it.”

Tannen emerges from their dressing room with purple spiked hair and a blue translucent coat over a purple bikini top and skirt. They are a bit perturbed because they forgot to bring nail glue to apply fake nails, but the detail goes unnoticed among other vibrant accessories and multi-colored contacts. 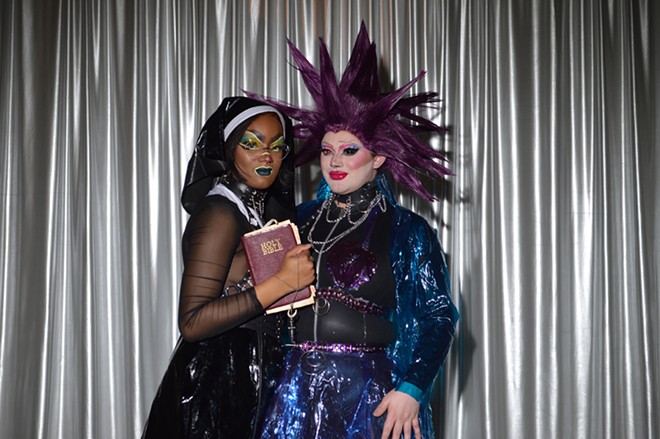 Rampleman gives Tannen very little direction, urging that she’s simply there to document. Anything goes, “as long as you stay in frame” she says. Forcing an artist to perform in a specific space to stay in camera frame is Rampleman’s least favorite part of the documentation process because the baseline energy of drag is an over-the-top expression of self that often involves wild props, animated dancing and impassioned lip-synching — things that aren’t easily contained or restrained.

Tannen, who is a prominent member of ODD Presents, poses in front of a silver backdrop, their fierce profile accentuated by a piercing wig. “Aura” by Lady Gaga begins to play. With a flick of the wrist, Tannen begins to mouth the spoken-word intro to the song. Their intensity builds with the music until they are wildly laughing and twirling, inserting an impressive backbend and swift voguing.

“I think it’s really important what (Rampleman) is doing because it’s normalizing drag to audiences who don’t necessarily always think about drag as art,” Tannen says. “Some people think it’s just dressing up and acting crazy — and to an extent it is — but when people see this exhibit they will think, ‘Wait this actually goes deeper than dancing at a club in makeup.’”

Rampleman has been documenting alt-drag artists for three years, including in Brooklyn, where she now lives. She has also done residencies in New England and Pittsburgh and hopes to continue the project internationally. She employs similar lighting and framing within each video portrait series to form a cohesive look. The result is a gallery lined with still photos pulled from videos that convey, without words, what alt-drag and burlesque is and what it means to be part of the culture.

Traditional forms of drag are still included in Life Is Drag — the more pageant-style feminine looks and campy characters that many people recognize. But the art includes the entire spectrum of genders, regardless of how the performer identifies, and the fluidity of gender and radical self expression are the focal points.

“What I am hoping to show with this project is that there are also bio-queens/hyper-queens (those who identify as female at birth), drag kings, drag things, drag monsters (and) gender jesters, often doing much more experimental performance art-y drag,” Rampleman says. “I also include neo-burlesque performers because I see that as a form of drag as well — maybe just with more strip-teasing and less lip-synching. The main point, though, is we are all doing drag all the time, whether we realize and recognize it as such or not. The name of the project came from a RuPaul quote: ‘We’re all born naked and the rest is drag.’”

Two monitors at the head of the Wave Pool gallery complement the still photography and continuously cycle through hours of footage. One monitor is dedicated to the work Rampleman has completed so far in Cincinnati. The other shows Life Is Drag performances captured elsewhere. Gallery guests can control which performance’s sound they want to hear and may even find that a silent portrait is just as powerful as one with audio.

If you can’t make it to the gallery, all videos are archived on lifeisdrag.com, along with bios of performers and digital tipping info.

Rampleman’s Wave Pool residency is sponsored by prominent local art collectors Sarah and Michelle Vance Waddell. Life Is Drag is, in part, a response to selected pieces from the Vance Waddell Collection, which are displayed among the exhibit portraits.

Rampleman specifically selected “Untitled (Self-Portrait with Sun Tan)” by Cindy Sherman, a prominent American artist who uses makeup and backgrounds in her images to transform into different characters. The portrait reflects Rampleman’s interest in the theatricality of performing gender, and Sherman’s use of extreme makeup mirrors the craftsmanship and talent seen in the drag profession.

Wave Pool typically selects two artists per year for its residency program. It’s a highly selective, juried process that gives artists a platform to share work that directly responds to community-driven wants and needs. The organization’s founder and executive director Cal Cullen says there were so many impressive candidates this year that the arts nonprofit couldn’t pick only two. Instead, Wave Pool doubled the number of selected residents, making Rampleman the first of four.

Rampleman has a special connection to drag culture in her hometown of Cincinnati, and local artists like Stixen Stones of ODD Presents appear in multiple portraits in Life Is Drag. Rampleman says that the artists of ODD Presents and Smoke & Queers have been pivotal in directing her to emerging and seasoned performers.

“I think there’s still a ton of people that have no idea that this form of art exists. I do hope that the project is able to educate, enlighten, open hearts, open minds,” Rampleman says. “I think so long as you don’t have a face or a name to put to these terms that seem off-putting to people, that it’s really easy to just be judgy without having proper context. Just to see extreme, radical self expression is hopefully inspiring to others to maybe push their own individual envelopes a little bit.”

Life Is Drag is on view at Wave Pool (2940 Colerain Ave., Camp Washington) through April 30, with a closing reception that features a drag show hosted by ODD Presents 5-8 p.m. April 30. More info: wavepoolgallery.org.