For the first time since 1971, the Cincinnati Opera’s entire summer season will take place outside. 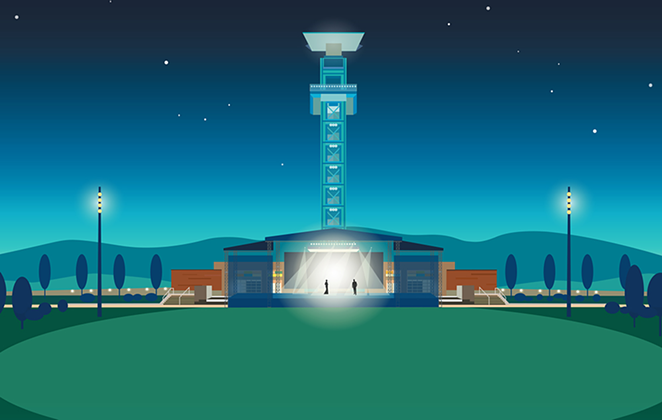 Photo: Provided by the Cincinnati Opera
A rendering of the stage at Summit Park

For the first time since 1971, the Cincinnati Opera’s (CO) entire summer season will be outdoors. Two weeks ago, the company announced its 2021 season is being held in Blue Ash’s Summit Park, a 130-acre complex of recreation areas that includes a stage platform at the base of a 153-foot observation tower.

The decision to move performances outdoors came in the wake of COVID spikes at the end of 2020, says CO Artistic Director Evans Mirageas.

Although the CO presents an annual season preview in Washington Park, this summer marks the first outdoor season since the company decamped from the Cincinnati Zoo to Music Hall.

Working with a team of staff, board and community members, the CO explored several outdoor options including the Cincinnati Zoo, the company’s original home. Summit Park was a last-minute addition to the list.

"I live 12 minutes away from the park (and have) driven past it many times, but never thought of it as a venue,” Mirageas asys. “We went out there in January to meet with their team and we were blown away by their enthusiasm and by the space itself.”

Blue Ash officials are equally enthusiastic, says Dan Guthrie, the city’s recreation superintendent. “We’re really excited about this and, from the start, the CO staff have been amazing to work with.”

Located on the site of the former Blue Ash Airport on Glendale-Milford Road, Summit Park’s first phase opened in 2014 and has grown to include restaurants, upscale housing and a catch-and-release pond, as well as playgrounds and the expanse of the Great Lawn.

It’s a win-win for both organizations, an opportunity for the CO to bring new audiences to opera and for Blue Ash to work with a ticketed event for the first time, something the city and the park are eager to try out, according to Guthrie.

“I’m very impressed with their organization, ensuring that we have a partnership that is fair in terms of sharing expenses and ticket costs,” Guthrie says. Examples of shared costs include fencing to cordon off the audience area, as well as event staffing and signage.

“We’re helping them to pave new ground and they’re helping us with working our way through the logistics,” says Joe Peacock, CO’s director of patron engagement, who is overseeing the venue details with Guthrie.

And the logistics are formidable. Visiting the park last weekend, I saw faint outlines of 10-foot-by-10-foot pods already painted on the Great Lawn — a total of 388 (“That took almost 1,400 gallons of paint,” Guthrie says). And the stage itself is huge: 120 feet by 80 feet. Access, parking, emergency procedures, ticketing, seating, bathroom facilities and maintaining Centers for Disease Control and Prevention (CDC) safety protocols are being worked through every day.

“In one of our first meetings, we drew up a list of initial concerns and it ran to four or five pages of bullet points,” Guthrie says. “We want to provide a safe and viable space for performers and audience and the park staff wants to make sure there’s access and room for people to enjoy the public spaces that will be open during performances.”

It’s starting from scratch for the CO.

"During a normal summer season, we’d partner with Cincinnati Arts Association to handle details with Music Hall and (the School for Creative and Performing Arts),” Peacock says. “In this new venue, working with the Summit staff is critical and we’re all on the same page. They’re terrific.”

Scheduling was one of the first issues. Summit Park’s summer events range from a farmer’s market and outdoor fitness classes to the Taste of Blue Ash and the annual Fourth of July celebration — Red, White & Blue Ash — which in pre-pandemic years drew up to 70,000 people.

“We couldn’t have performances on Wednesday because an evening yoga class meets on the great lawn,” Mirageas says with a laugh.

The summer season begins on July 17 and runs through July 31 featuring nine performances of three operas — Carmen, Tosca and The Barber of Seville — over a three-week period. Each performance starts at 8:30 p.m. and runs 90 minutes, with no intermission.

Every detail is determined by public health and safety guidelines. In January, the CO appointed veteran stage manager Andrea Shell as COVID compliance officer, overseeing everything from rehearsals to parking.

The Summit’s concrete stage platform provides ample space for a 40-piece orchestra upstage, spaced six feet apart. The 40-member chorus will be on steps flanking both sides of the stage, with singers downstage, facing the audience.

In case you’re wondering just how singers will be able to follow the conductor, Mirageas explains that video monitors will be positioned so both singers and the conductor can see each other. Singers will be miked and an elaborate sound system will be utilized “so you’ll hear everything,” Mirageas says.

He adds that cuts to the operas are minimal and that the important arias and ensembles remain. Staging is another matter. No costume changes, no scenery. The company plans to place a canopy structure over the stage to provide lighting installations and to project sound.

“We’re playing it by ear to see how much staging we can actually do,” Mirageas says. “It depends on our singers’ comfort levels and other factors. We’re letting science be our guide.”

Rehearsals are scheduled off-site and COVID tests are part of the routine. Science will guide seating, as well. With 388 projected pods accommodating up to four people each, the audience could total over 1,500. But that number may decrease as patrons opt for a smaller pod and pods are eliminated due to placement issues.

Audience members will be required to wear masks throughout the performance.

Subscription information goes out in the next two weeks, with the top price for a single performance at $50, well below the cost of an orchestra seat in Music Hall. And although that ticket includes a chair, Peacock encourages audience members to bring their own lawn chairs or blankets.

Cicadas won’t be a problem in mid-July, but in the event of bad weather, three rain dates are built into the schedule.

“This isn’t our first time dealing with a large-scale event, but now we’re dealing with COVID and ticketed access to the Great Lawn,” Blue Ash's Guthrie says.

Golf cart shuttles will be available, but the distance from the overflow parking area to the lawn is roughly the same as that from the CET garage to the Music Hall entrance.

Add to the mix port-o-lets, whether or not to allow food and drink, access points and directional signage. Another challenge for Guthrie and his team is maintaining the park and accessibility to the non-performance spaces during shows.

Given that the pandemic is far from over, everyone acknowledges that plans may have to pivot, but optimism is carrying the day.

For both the CO and Blue Ash, there are unexpected benefits.

“I’ve never been to an opera and I don’t think many of my staff have,” Guthrie says. “I’m really looking forward to this immersion.”

“I hope that other arts organizations will see and learn that this location and this venue are incredible performance spaces. Summit Park has a great performance venue, accessible from both interstates,” Peacock says.

For everyone involved — performers, staff and especially the audiences, it’s all about the communal aspect: creating and hearing live music in real time with a group that can respond.

Applause will be encouraged, even if hugging and handshakes aren’t.