Votto has been with the Reds his entire career, but — like fans — he needs to see some reward. 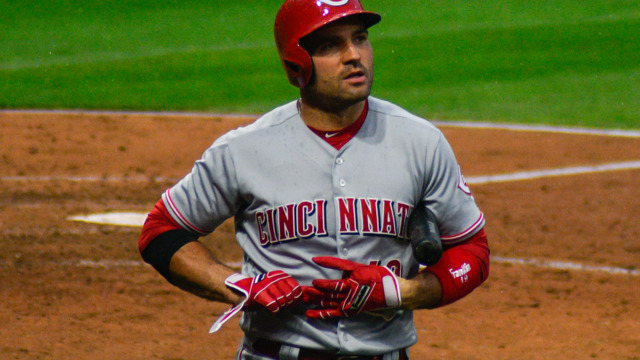 The Cincinnati Reds' elder statesman has one request: win.

In a March 14 interview with MLB writer Mark Sheldon, Reds first baseman and clutch hitter Joey Votto shares what he wants from the upcoming 2022 season and how he plans to stay healthy.

But with the MLB lockout ending just last week and team trades starting up again, the Reds will look a little different this year, to Votto's and fans' chagrin.

On Monday, Cincinnati traded All-Star outfielder Jesse Winker and third baseman Eugenio Suárez to the Seattle Mariners. That's on the heels of the Reds sending pitcher Sonny Gray to the Minnesota Twins on Sunday. In both deals, Cincinnati acquired young players and prospects and cut payroll.

The club also is reportedly "not interested" in luring back outfielder Nick Castellanos, who joined Winker at the 2021 All-Star Game and opted out of his remaining contract in November to become a coveted free agent.

Reds fans have been craving a quality postseason berth, something they hadn't truly seen in years. During the COVID-shortened 2020 season, the Reds made it to the Wild Card playoffs but lost the first round to the Atlanta Braves without scoring at all. Before that, Cincinnati hadn't been to the postseason since 2013.

Unfortunately, it didn't happen in 2021. And Votto is taking notice.

"I have higher expectations to be part of other large Major League moments," Votto tells Sheldon. "That’s without question concerning to me. I’ve been in the same uniform my entire career. We haven’t done enough winning."

With two guaranteed years left on his contract, does Votto think about heading to another team on his own accord or through a trade from the higher-ups? That's not for him to decide, he says. But the lifelong Red — who played for Cincinnati's minor-league teams before being called up to the big show in 2007 — seems committed to Cincinnati for the long haul.

"I have never once in my career asked or even whispered anything like that (a trade). I’ve been loyal to this uniform, to this city, to the contract that I signed," he says.

During the 2021 season, Votto hit .266, dinged 36 home runs and had 99 RBI. Votto also reached a number of significant career milestones last season, including 1,000 runs batted in, 300 homers and 2,000 hits (something only four other Reds players have done). He is only the second National League/American League player to achieve those marks all in the same season.

Baseball experts already are calling Votto a lock for the National Baseball Hall of Fame and Museum, commending his hitting, on-base percentage, slugging and low strikeouts.

The Cincinnati Reds went 83-79 during the 2021 regular season and missed out on post-season action with only a few games to spare.