Before undergoing surgery on Aug. 19, Votto was hitless in his previous 22 at bats. 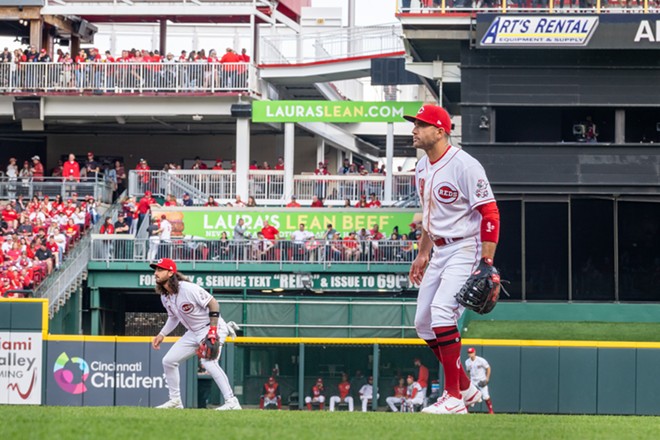 Joey Votto is done – at least for now.

The longtime Cincinnati Reds’ first baseman had surgery on his left rotator cuff on Aug. 19 after not appearing in a game since Aug. 16. He was yanked from the lineup against the Philadelphia Phillies on Aug. 17 and placed on the 60-day injured list.

“Joey this morning had successful surgery to repair his left rotator cuff and bicep,” Reds general manager Nick Krall said. “The surgery was a little more than expected. The injury definitely limited the use of his left shoulder and affected his performance, but we expect he will be able to participate in spring training and be ready for the 2023 season.”

Before undergoing surgery, Votto was hitless in his previous 22 at bats – a new career high for the slugger. During a briefing with reporters, Votto said that he’d injured his shoulder in 2015 and had been able to play through it, but the past few months had brought new pain.

“It’s a big blow, obviously. We’re going to miss him a ton,” manager David Bell said. “I have no idea how he was playing with it. I don’t know what he said, but trying to play this game with a torn rotator cuff…”

Doctors emphasized that the surgery needed to happen in order for the Reds to have Votto back in time for next season, Bell said.

Votto was on the injured list earlier this year thanks to COVID-19 and missed several games in July due to tightness in his back.

After the surgery that day, Votto posted a photo to Instagram saying, “Today called for ice cream.” In the photo, Votto licks an ice cream cone while his left arm rests in a sling.

The Toronto-born Votto – who the Reds drafted in 2002 and who entered the big leagues in 2007 – is just nine games shy of playing in 2,000 career games. On Aug. 14, he set a new MLB record for games played by a player born in Canada with 1,989 – more than previous record-holder Larry Walker, who is enshrined in the National Baseball Hall of Fame and Museum in Cooperstown, New York.

During the Field of Dreams game against the Chicago Cubs on Aug. 11, Votto had one walk and one strikeout in three at-bats. The Reds lost 4-2.

As of press time, the Reds are 48-71 on the 2022 season, are more than 20 games behind the NL Central-leading St. Louis Cardinals and are not expected to see playoff action in October. During the COVID-shortened 2020 season, the Reds made it to the Wild Card playoffs but lost the first round to the Atlanta Braves without scoring at all; before that, Cincinnati hadn't been to the postseason since 2013. The Reds have had just five winning seasons out of the last 15.