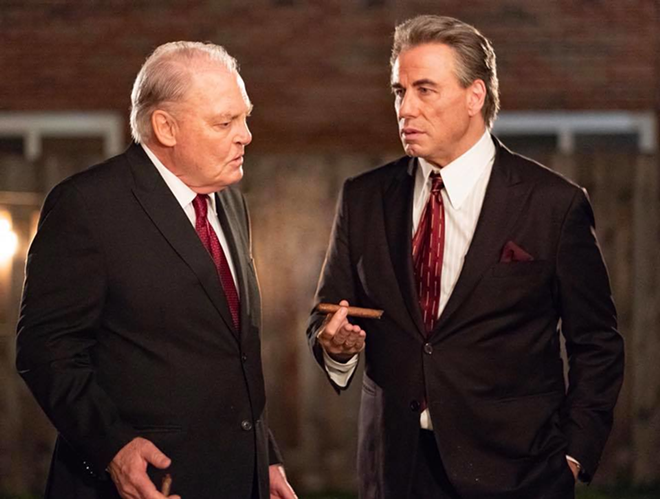 It's early, but first indications are that Gotti — the Mob biopic starring John Travolta that was filmed here in 2016 — may not be headed for the kind of acclaim that such other recent Cincinnati-made films as Killing of a Sacred Deer, Carol, Miles Ahead and The Fits have garnered.

The film, which just premiered as a special screening at the Cannes Film Festival (and is scheduled for a June release), received a D grade from the film website IndieWire. Reviewer David Ehrlich was quite unkind.

He did, however, note "the courage that must have been required to unveil it at Cannes, where it surfaced alongside a tribute to Travolta designed to look back on better roles." And, he says, "Travolta's performance is hammy enough that we need hard evidence he’s playing a real person (he plays the Teflon Don like a cross between Ray Liotta and Alec Baldwin’s impression of Donald Trump)."

The film is directed by Kevin Connolly (E from HBO's Entourage series), with music by Pitbull, and is based on a memoir by John Gotti, Jr. The review finds the film almost a complete misfire, but does say that, "At least Travolta gets to have some fun chewing the scenery, as the actor clenches his jaw and gives us the full Broken Arrow in a pin-striped suit. He gets all the good lines (e.g. 'If I robbed a church and had the steeple sticking out of my ass, I’d still say I didn’t do it!'), leaving the rest of the cast to just wait for their turn to deliver more exposition. But the cartoon vibe doesn’t square with some of the personal tragedies that Gotti has to go through over the years, even the most painful of which quickly fade into the background."

Ehrlich closes with this film comment: "Despite asking you to root for its subject (and to remember that his crime family didn’t target civilians or film critics, which is a nice touch), Connolly’s biopic isn’t a hagiography. The problem is that it’s not really anything. This is a strange thing to say about a notorious mob boss who was locked up for murder, but John Gotti deserved better."

You can read the full review here.

In its review — which also said the film was bad and should be whacked — Hollywood Reporter observed this about Gotti: "Made on a purported $10 million budget, the film was shot in Cincinnati and tends to feel like it, with a few aerial images and Brooklyn exteriors reminding us that this is New York." That review is here.