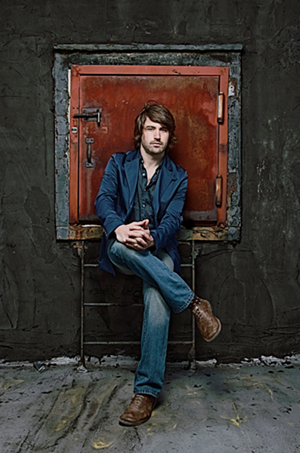 Photo: Vincent Soyez
Pianist Dan Tepfer
For the Constella Festival’s sixth installment, which formally begins Saturday and continues through March 25, there will be just five ticketed events for adults. That may sound modest for an eight-day festival, but the programming aims to cover a full spectrum of the arts.

“Popular events like dance performances are back,” says Tatiana Berman, Constella’s founder and artistic director. “One program deals with Russian politics, and we close with Tango music.”

“Scott Wyatt has also had an extensive career singing opera in Europe and throughout the U.S.,” Berman says. “Jessica suggested him because they’ve performed together.” Lydia Brown is the accompanist on piano.

Possibly the edgiest offering comes 4 p.m. Sunday when the action moves to the New Riff Distillery in Newport as pianist and composer Dan Tepfer presents his program, Piano 2.0: Melding of Man and Machine.

At 35, Tepfer is a renowned Jazz pianist, but he dismisses genres while fusing a variety of styles into his performances and recordings. Tepfer studied astrophysics, and he brings that knowledge to his performance by utilizing a Yamaha Disklavier CFX player piano to create a unique improvisational experience.

“Dan will use his laptop to feed algorithms into the piano, which will respond and play with him,” Berman says. “He’s also planning to incorporate visuals into the algorithms.”

She adds that New Riff’s space is ideal for the sonic environment that Tepfer creates.

Russian composers are featured 8 p.m. March 23 at downtown’s Gallery 708 on Walnut Street, with Berman herself as the violinist in a program that contrasts the beauty of Russian music with contemporary realities of Russian politics.

In this From Russia With Love program, music will alternate with poetry by contemporary Russian authors, storytelling and video clips created by David Donnelly. For Berman, who left Moscow when she was 14, there’s an obvious personal tie that has become more painful in recent months.

“I find that I can’t talk about politics to my Russian relatives,” she says. “My aunt has been targeted because she’s spoken out too many times. It’s become a dangerous place.”

Luminous Dance takes over on the evening of March 24 with two world premieres commissioned by Constella. The festival is collaborating with the National Underground Railroad Freedom Center, which is opening the photography and artifacts exhibition Mandela: The Journey to Ubuntu that day. The two dance performances will be by the Dayton Contemporary Dance Company’s touring group and MamLuft&Co Dance in the Freedom Center’s Harriet Tubman Theater. The Dayton dance company’s piece will be set to Jazz great John Coltrane’s “Spiritual” composition.

“We’re proud of the fact that we’ve commissioned dance works for the past six years,” Berman says. “This is our first time working with MamLuft, and local composer Sean Simon has written the music for this commission.”

On the evening of March 25, the festival concludes with a Tango concert at Gallery 708 featuring Duo Scofano/Minetti, joined by Berman and bassist Jeff Greene. Richard Scofano plays bandoneon and pianist Alfredo Minetti serves as arranger. A milanga dance party follows, co-sponsored by Tango del Barrio. There will be food, wine and beer.

“It’s one of our most eclectic festivals,” Berman says.