The shop's co-owners have worked to bring tie-dyeing into the new millennium, creating such designs as a sparkling geode, a seascape, a Grateful Dead bear and a serene Om symbol. 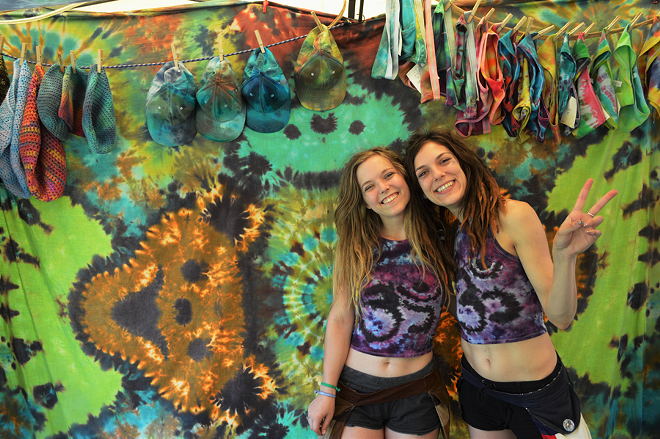 Photo: Katie Griffith
Holly Short (left) and Stephanie Zier with some of their tie-dye goods
It’s the trend that will never die. But it is certainly preoccupied with dyeing. With more than 80 colors at their fingertips and an assortment of products, Funky Sunshine’s three proprietors are reinventing the tie-dye fad.

Since tie-dyeing was such a fad of the 1960s and early 1970s, we’ve all seen its bursting colors and spiral patterns, the corners of stain that don’t exactly blend well and the random spacing of untouched fabric. Many of us have tangled our fingers in rubber bands, struggling to secure a cotton T-shirt in different angles to maximize a multi-color dipping strategy.

Funky Sunshine’s co-owners have worked to bring tie-dyeing into the new millennium, creating such designs as a sparkling geode, a seascape, a Grateful Dead bear and a serene Om symbol. And they can’t seem to keep their top-selling tapestries in stock at their Anderson Township store.

Stephanie Zier, her boyfriend Casey Short and his sister Holly Short have been working for four years to perfect such intricate designs, practicing the craft on everything from underwear to crop tops and sweatshirts to bedsheets.

“We don’t make basic tapestries, we make art,” Zier says. “We really like to make unique, individual items that, when you see it and it speaks to you, you know it’s yours and no one will ever have anything quite like it.”

Funky Sunshine started in 2013 with a pair of white leggings and an Etsy account. At that time Zier, who studied graphic design at Miami University, was selling paintings through Etsy. After Holly gifted Zier a pair of leggings, they dyed them together, gauged interest from friends and family and decided to start selling. Zier’s Etsy account morphed into Funky Sunshine, which today reaches customers around the world and ships products to at least 10 different countries, Casey says.

“Sunshine is spreading light to the world,” Zier says.

“And being funky is just kind of who we are,” Holly adds.

A store at 6448 Sherman Ave., in a building with a few retail spaces on an otherwise residential street on the Anderson Township/Mount Washington border, opened in 2014. Its hours are 3-7 p.m. Wednesday-Saturday, or by appointment. Today, clothes and accessories line the walls and fill the racks while handmade goods from nine local consigners add to the inventory. When the doors aren’t open, the trio is liable to be inside adding to that inventory, since they now have begun vending at craft shows and festivals in addition to selling in-store and online.

“We made a bear mandala yesterday but I know we aren’t coming back with that one, so I’m making another one now,” Zier says, planning ahead for a weekend of vending.

Excess dye drips from the tabletop in streams of blue and purple as Zier carefully folds a 7-by-8-foot tapestry. Ensuring the ends meet evenly, she places it in the middle of the room and begins the pleating process.

Although most would like to attribute tie-dye to hippies, it actually has Japanese roots. A centuries-old technique called shibori employs a resist-dyeing method in which fabric is pleated or folded and secured. During the dyeing process, the folds prevent color from reaching certain areas, which yields complex patterns — a tactic the Funky Sunshine entrepreneurs have diligently cultivated and made their own. The shibori way is mainly limited to indigo and shades of blue, but the Funky Sunshine way embraces as many colors as possible.

“I like to think we bring a certain ambiance to shows and festivals when we show up and turn our lights on at night,” Casey says. “It’s a certain atmosphere like nowhere else.”

Zier with Casey and Holly curate a tie-dye universe at every event they vend. Vibrant tapestries enclose the space while others hang from the ceiling among hats, socks and scarves; sometimes they leave room for specially made pieces that cater to themed occasions, like custom Pikachu and Super Mario T-shirts and tapestries that hung front and center at a June event called Geek Out 4.0 at Hannon’s Camp America in Butler County.

Funky Sunshine’s dedication to the grassroots music and arts scene is matched only by the traditions of the festivals themselves. For the past three years, the trio has attended about 15 shows per season and have gained such opportunities as making the official festival T-shirts for Ohmstead, an Ohio-based music festival.

In September, the three will host a tie-dye workshop at the Laniakea Transformational Arts Festival, also at Hannon’s Camp America. They will pre-fold and dye the name of the festival into a 24-foot-long banner, Zier said, and then allow anyone to add to it. This will be the longest tie-dye piece they have attempted thus far.

Funky Sunshine frequently hosts workshops and community events at the store, some tied to holidays like a recent Father’s Day event, and others designed to contribute to charities. Each month, its owners pick a local nonprofit to receive a donation of 15 percent of Saturday sales. This effort has benefited Keep Cincinnati Beautiful and the Freestore Foodbank, among others.

“It started right around our one-year anniversary of the storefront, and we were feeling really grateful for everything,” Zier says. “We wanted to give back for all the love we were receiving.”

The three decided giving back should involve more than monetary donations. So they started an effort to provide mats for the homeless. Using recycled plastic bags, volunteers gather at the store every third Saturday and crochet pre-cut strips of bags into mats. Once a few are complete (Zier says it takes about 40 hours to hand-stitch each mat), the trio and sometimes the volunteers find people in need of them. They deliver the mats personally to homeless people rather than donate to shelters or other places to make sure they get used immediately as intended.

“We are about spreading our love further and wider to more people than making quick cash,” Zier says. “For us it’s about impacting people’s lives.”