It looks delicious, but we’d like to show him how the locals eat a 4-way 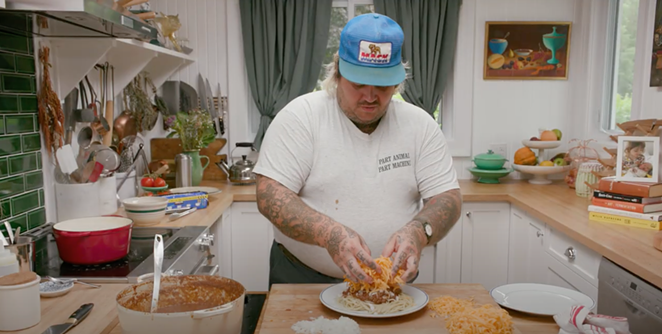 Cincinnati chili just got a shoutout from one of the internet's loudest and most popular chefs, Matty Matheson. The Canadian personality shared his take on our city's famed culinary export in the latest episode of his NSFW cooking show, Just A Dash, which is in its second season and available to watch for free on YouTube.

If you've never experienced a Matheson cooking lesson, imagine a character that is aesthetically a mix between Guy Fieri and Action Bronson, voiced by an over-caffeinated Mel Blanc. Matheson's gregarious, high-energy performance in front of the camera does not overshadow the gourmand's talent — he currently hosts three food-related web series on YouTube, a podcast, has made appearances on the late night talk show bracket, opened a new barbecue restaurant in Fort Erie, Ontario and recently published his second cookbook, Matty Matheson: Home Style Cookery.

As Matheson cooks the Cincinnati chili, it goes from an aromatic sofrito to a tomato sauce sludge he describes as "wet and undesirable." The show then goes a little off-kilter when he adds the ground meat, which he anthropomorphizes and carries on a conversation with as the thickening chili bubbles.

"I can't travel to Cincinnati right now," Matheson yells as he chops a white onion to top his 4-way chili spaghetti, "but let me tell you, we're gonna be eating Cincinnati tonight!"

After he burns his mouth on a boiling first bite, the show breaks into a surreal musical interlude. This isn't your traditional cooking show, but the end results always look delicious.

Thanks for the Cincy shout out, Matty. Come by when you can; we’ll pontificate over the nuances of Cincinnati chili any time.