Chef Jeffery Harris based Nolia on his New Orleans upbringing as well as his travels and other inspirations. 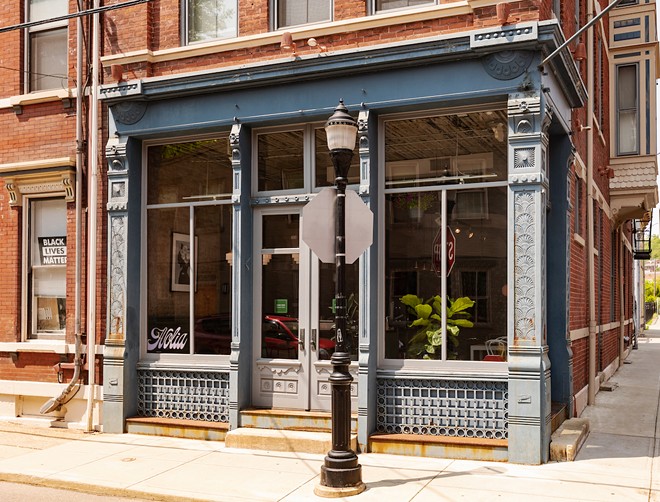 Photo: Hailey Bollinger
Chef Jeffery Harris based Nolia on his New Orleans upbringing as well as his travels and other inspirations.

New restaurant Nolia adds some Southern flair to Cincinnati’s foodie landscape. But while the restaurant serves unique dishes inspired by Chef Jeffery Harris’ upbringing in New Orleans, the fare stays authentic to the chef himself rather than to his hometown’s traditional cuisine.

Situated in the space formerly occupied by Please (famous for its selfie-friendly bathroom and James Beard Award-nominated chef’s stellar offerings) in Over-the-Rhine, the dining environment is upscale yet approachable. Nolia’s menu is stacked with dishes like delectable smoked chicken slathered in Alabama white sauce, cider-stewed collard greens, redfish court-bouillon (pronounced co-boo-yon) and much more. All of the side dishes are vegan and, while you should not expect them to play zydeco or serve hurricane cocktails in novelty cups, the restaurant’s drink menu will truly laissez les bon temps rouler.

I meet with Harris and his team on a Thursday morning as they prepare for the evening’s dinner rush. Stock simmers on the stovetop, giving the room a savory perfume, while sous chef Stephanie Gonzalez deep-frys some rice paper — the kind used for spring rolls and the like — to make vegan chicharrónes. The exact spice blend for this dish is kept secret, but it’s reminiscent of an elevated crab boil seasoning — similar to Old Bay, but heavier on the garlic. The one hint Gonzalez offers is powderized black eyed peas — not something you’d likely be able to just guess, but on the palate it’s uncanny.

The chicharrónes are a garnish for stewed okra with tomato, served over coarsely-ground Jimmy Red (a Southern corn varietal) grits, a simple side dish that borders on perfection. If you’re accustomed to instant grits, this is transcendental. Not a bad start to your meal.
click to enlarge

“This whole restaurant was put together from my childhood,” Harris tells CityBeat. “Stuff that I love about my city, my hometown of New Orleans and my travels throughout the South — from Texas, to the Carolinas, to Georgia. We just tried to play on parts of the South and also give people a reimagining of what Southern food is.”

Harris also runs Jimmie Lou’s, named for his great-grandmother Jimmie Lou Green, to whom he credits his deep love for food and cooking. The menu at Jimmie Lou’s comes from the same heart and mind, but its restaurant location, inside Oakley Kitchen Food Hall, which could be compared to an upscale food court, lends itself more toward take- out for a really tasty picnic rather than Nolia’s fine dining environment that just begs you to sit at a table and savor the entire mealtime experience.

While Gonzalez works the front kitchen, chef de cuisine Nathan Penny tends to the chicken quarters smoking in the closed-off back courtyard behind the restaurant. He explains that when slow-roasting meats — especially chicken, which has particularly fatty skin that can get a bit gelatinous if cooked at a low temperature — you want to maintain the heat around 250° or enough heat that the fat from the skin renders into crispy bliss rather than soggy leather.

The menu offers an assortment of seasonal dishes, including a raw bar filled at the moment with oysters with tasso mignonette (vinegar sauce with cured pork) and shrimp with cocktail sauce. Small plates run between the aforementioned transcendental grits with stewed okra and vegan chicharrónes, jerk fried oysters, sweet potato donuts, skillet cornbread and a country board laden with pork terrine and cured meats, cheese and seasonal pickles with toast from Allez Bakery. If you try any of the side dishes, you must go for the cider-stewed greens and, if you don’t drink up every last drop of the zesty braising liquor, there’s no hope for you. 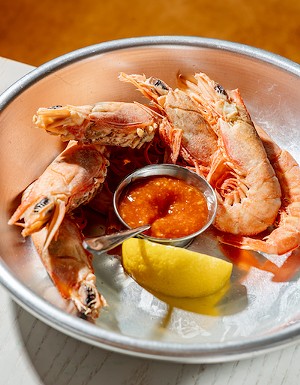 “I tell all my staff there’s no ceiling, there’s no box, there’s nothing but space,” Harris says. “So how you fill that space is what’s going to become of it. So, if we want to be great, then we’ve got to think greatly, we’ve got to think bigger than all the restaurants we’ve worked in. Like, every single person on my team, from dishwasher on up, they have a voice.”

Harris’ open-mindedness in the kitchen is indicative of a larger trend in restaurants across the globe: chef- driven culture is on the way out. Gone are the days of celebrating the tyrannical chefs in fine dining. Like many facets of life, the results are proven to be better when the leader listens to their team rather than throwing a temper tantrum at the slightest challenge (that vanity-driven culture is not erased and likely never will be, but it thankfully
has diminished over the years).

What’s more important than one chef’s ego? A successful team that thrives in the workplace and is utilized to its fullest extent. While Harris must be commended for the phenomenal team he’s assembled, it seems what he’s most proud of at Nolia is the powerfully effective menu he credits to his staff. Democracy in action.