"We are both community-oriented spaces really about making progress happen in this area," Julia Keister says. 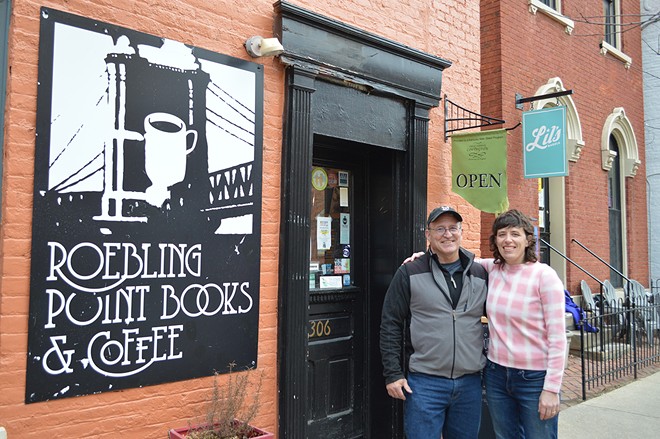 When failed lease negotiations forced Lil’s Bagels to close permanently in December, owner Julia Keister vowed it wouldn’t be the end of Lil's. Now, less than a month since the bagelry’s doors on Greenup Street in Covington, Kentucky, closed forever, Keister is making moves to solidify Lil's new direction.

During almost five years of operation at its Covington location, Lil’s Bagels made a name for itself by offering signature bagels and beloved “hawt” sauce daily; Lil’s also became a staple in the LQBTQ+ community and a hub for philanthropic initiatives.

Keister and her employees developed a special connection with their neighbors at Roebling Point Books & Coffee, too. Not only did they share common spaces like an alleyway and a parking lot, they shared customers and a mission to serve the community by offering more than just food and drink.

Owner of Roebling Point Books and Coffee, Richard Hunt, and Keister would have weekly meetings to collaborate on topics like community events and neighborhood initiatives, Hunt says. Turns out, they’d also been discussing something much bigger: how to merge their businesses.

Once Lil’s Kitchen finds a spot to start cooking, both Roebling Point Books & Coffee locations in Covington and Newport will offer a menu prepared by Lil’s Kitchen.

“I think Roebling Books and us have, since a few months after we opened, have become this joint venture on this corner for many reasons,” Keister tells CityBeat. “I think we have a lot of the same mission. We are both community-oriented spaces really about making progress happen in this area. And then, coffee and bagels go together really well. People see us as kind of a together business anyway, so I think whatever team or ideals or creativity that we can bring here [to Roebling] will make us still present and we will continue to do as much as we can for the community.”

In the meantime, Keister is searching for a commissary kitchen that will allow cooking to resume. She says the kitchen at Baker-Hunt Art & Cultural Center is a viable option. As long as it’s affordable, she says, the Baker-Hunt kitchen is likely going to be Lil’s Kitchen’s new, temporary home.

If she can solidify residency there, Hunt and Keister are looking to debut Lil’s Kitchen at Roebling Point Books & Coffee in March.

What about the bagels?

“It will be a different menu,” Keister says. “We are trying to make the menu pretty small at first with no substitutions kind of thing, and easy to make.”

To make the transition as easy as possible, Lil’s Kitchen will initially offer cold sandwiches, salads, smoothies and pre-made wraps that can be frozen and toasted to serve, Keister says. Space in the two Roebling locations will be utilized for food preparation, while everything else happens in the kitchen.

Keister is making sure to continue sourcing ingredients locally, she says, and even though customers might not get to indulge in a favorite signature bagel, familiar menu items will appear. Keister confirmed that Lil’s “hawt” sauce will, in fact, live on.

“We are trying to bring in the same flavors,” Keister says. “The Middle Eastern and Jewish, that kind of flavor profile into everything. And kind of like a kibbutz breakfast, which is very communal but simple. Things more on the savory side than the sweet side and healthy. We always say we are making old-world traditions fresh, we are sticking to that. So it’s not going to be that far off.”

One official menu item is a tahini, date and banana smoothie. The smoothie still needs a name, Keister says, but the recipe is final. It’s going to be a signature menu item for everyone, one that is a “healthy but delicious, all day smoothie,” she says.

Even though Keister had to reimagine a menu without bagels, she didn’t have to do it alone. And while customers might miss their favorite smears, they can look forward to seeing some of the familiar faces that served and made them in the Covington location.

Keister and Hunt were able to secure jobs for six out of the 15 people employed by Lil’s Bagels – seven if you count Keister. She says all of her previous, full-time employees from Lil’s Bagels are currently in training at Roebling Point Books & Coffee for positions like book specialist, barista or cook.

“I like the fact that nobody was an unknown,” Hunt says. “We were either getting lunch over there [at Lil’s Bagels] or they were getting coffee over here. It was a non-interview process, it’s like, ‘I know you, of course this will be great.’”

The next step is finding a permanent home for Lil’s Kitchen, one that will become a community space, Keister says, and hopefully produce bagels again. Hunt and Keister are planning events like open mic nights, author readings and book fairs to raise funds for the permanent kitchen. They’d also like to secure a liquor license, Hunt says. Once this transition is complete, plans for even bigger things are already in the works.

“We have the benefit of the fact that we are not starting from zero,” Hunt says. “I have complete faith in our resourcefulness, because that’s how we’ve maintained for this long. We don't even call it customer service anymore, we call it community service.”