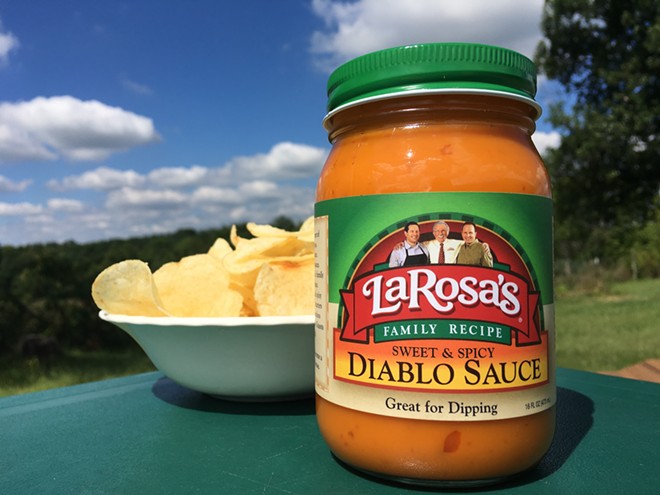 LaRosa’s Pizzeria is mostly popular for their crisp-yet-airy-crusted, sweetly sauced pizza pies, but that’s not all they serve. Like other pizzerias, LaRosa’s offers a whole menu’s worth of entrees, desserts, side dishes and — most popularly at the moment — condiments. Their Diablo Sauce is a bright orange dipping sauce, typically served with saratoga potato chips, that brings a fair balance of sweet and spicy notes. It recently hit store shelves, now available in jars at Kroger, both Jungle Jim’s International Grocery locations as well as at LaRosa’s 66 pizzerias across the region.

Mark Larosa, LaRosa’s president and chief culinary officer, spoke with CityBeat about the thought process behind Diablo Sauce’s creation, along with some of the inventive ways his guests have enjoyed the sauce since its introduction to the menu in 2001.
click to enlarge 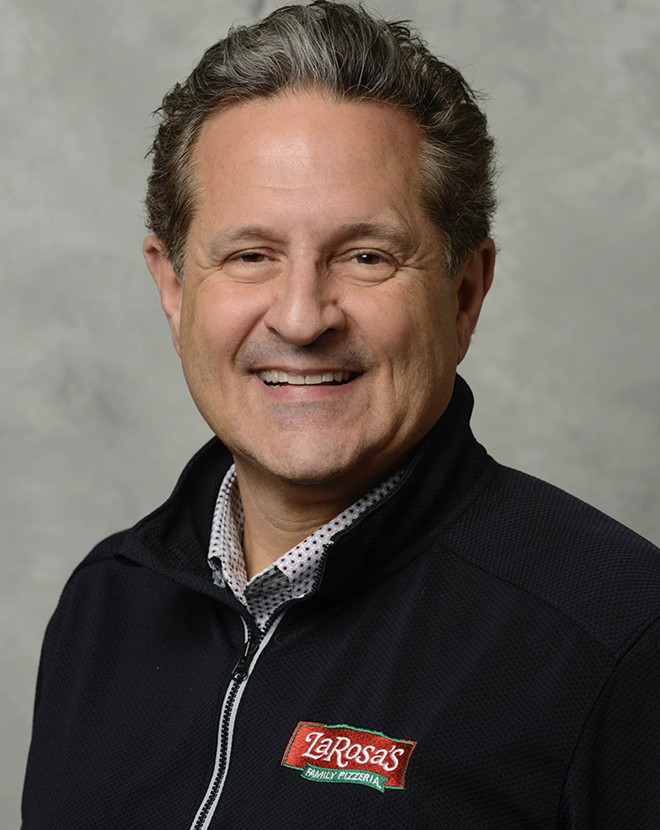 Photo: Provided by Mark LaRosa
Mark LaRosa, the president and chief culinary officer of LaRosa's Pizzeria.
CityBeat: How would you describe Diablo Sauce to someone who’s never tasted it?

Mark LaRosa: It’s not too hot; it’s got that kind of craveability factor. If the heat level was a little heftier, maybe people wouldn’t be as compelled to keep dipping. There’s a fine line of how far you can push some of the heat elements without scaring off some folks. But, it's kind of like a perfect balance between the sweet and the hot side of things.

CB: How did Diablo Sauce come about?

ML: At LaRosa’s, we’re known for sauce: my dad’s original sauce recipe from his Aunt Dena, sauce in dipping, sauce accompaniments; it’s a big part of a LaRosa’s experience. Sauce is an expectation, so we’ve always tried to add along the way. We added our version of saratoga chips — fresh fried kitchen chips — to the menu in the early 2000s and we needed a sauce accompaniment. We naturally had blinders on and we thought ‘what Italian flavored sauce could we have as an accompaniment?’ Unfortunately, anything with an Italian flair or theme that we came up with for the kitchen chips just didn't work. It was kind of like forcing it to be Italian and it wasn't the right fit.

CB: So, how did you find the right fit?

ML: I always was a fan of sweet Asian chili sauce, it’s a jar you can find in most Asian specialty stores. I think the first time I had it may have been at the original Boca when it was in Northside, when David Falk started there years ago. He did a french fry and he just put a bowl of sweet chili Asian sauce as the accompaniment with his fries. I think I became addicted then, I started using that sauce to coat fish and do other things just personally, but I always had that flavor appeal on my palate.
When we started working through it, we took mayonnaise, chopped up some jalapeño peppers, added some sweet chili Thai sauce and blended that together. One thing led to another, it was like ‘whoa, that's a sauce.’

CB: A kind of fusion sauce?

ML: At the time, in the late 90s into the early 2000s, a lot of fusion flavors taking various ethnicities and blending them together were kind of in vogue. So, I just thought when you have something fresh and fried and right out of the kitchen, they're hot and crispy and fresh, that would be something that would carry that flavor component and craveability for dipping.

CB: Then it hit tables?

ML: It was just in our restaurants as an accompaniment for kitchen chips and then, over time, people used it to dip their wings in, and cook their wings in it, dip breadsticks in it, fried cheese sticks ... whatever somebody wants to dip. And then slowly, over time, guests gave us great feedback on what they like about that sauce, ‘if you guys could bottle it and bring it to the grocery store, we would buy it.’
We took a stab and found a really good local manufacturer that could make it for us and jar it. We started with it in our pizzerias as just a grab-and-go item from our front counter in our lobbies. And we shared it with Jungle Jim’s to introduce it, so it was in the two Jungle Jim’s stores and and all of our pizzerias on display.

CB: Has anybody asked to have a pizza made with Diablo Sauce instead of your traditional tomato sauce?

ML: I've not heard of it on the pizza side of things. It happens primarily as a request within the the appetizer-starter-wing world, that is where it predominantly falls. We've played with it as a an accompaniment on a specialty pizza, where we would have a special recipe, a recipe that has the Diablo drizzled on the pie afterwards, just a way to finish it. We've had recipes that we've played around with it, we've not introduced or done anything in the marketplace with it. But it is a fairly versatile sauce, it can be used in a number of ways.

Find Diablo Sauce from LaRosa’s Pizzeria in the condiments aisle at Kroger and Jungle Jim’s, and at the counter of any LaRosa’s location. To learn more, visit larosas.com.
Scroll to read more Food News articles
Join the CityBeat Press Club