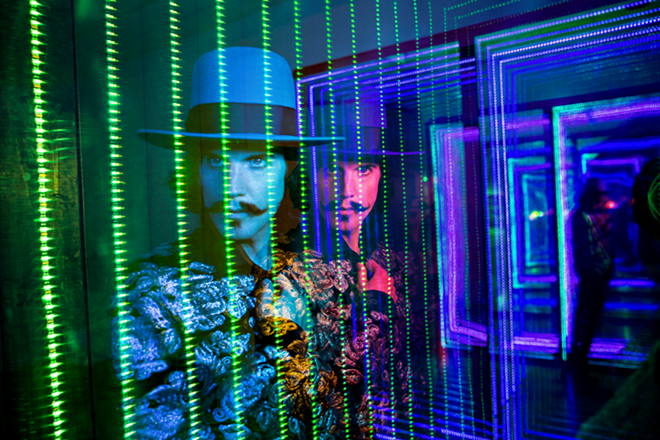 Since 2004 or so, there have been two distinct Eric Nallys. One is a soft-spoken husband and father, a guy who values his privacy and his downtime with family. Without his trademark dyed-black hair, he was almost indistinguishable among the regulars who roamed the Yeatman’s Cove/Sawyer Point area during Bunbury four years ago, shepherding his wife and two sons through the crowd without arousing the slightest interest.

Then there’s Eric Nally, the frontman of Foxy Shazam, the tumbling, flying gymnast with the operatic Rock voice, charming-cad mustache and non-sequitur sense of humor that was perfect for the burlesque Indie Rock of his band of gypsies. This Nally was on full display at the aforementioned 2014 Bunbury when, at the conclusion of Foxy’s Serpentine Wall set, as the closing chords of the band’s “Unstoppable” hung in the air, he borrowed a cigarette from a fan in front of the stage, lit it and blew hard into the butt, sending arcs of blazing tobacco embers into the crowd. He then screamed, “You’re all pregnant!,” dropped the mic and stalked away to end the show.

“What’s interesting for me is that character, the person that fronted Foxy Shazam, comes from the person you’re talking to now,” Nally says during a recent phone interview. “I can materialize that or summon it, however you want to think about it, onstage, whenever I want. I can do that with a video or a song or anything and make it wild.”

Nally has been partially absent since Foxy Shazam announced they were taking hiatus after the release of 2014’s Gonzo. The band splintered into involvement with several fascinating projects, including The Skulx and Cool Life (Alex Nauth), Babe Rage and Lung (Daisy Caplan), the J Dorsey Band and Freekbass’ Bump Assembly (Sky White) and TrxllyDxdgers (Loren Turner). Unsurprisingly, Nally notched the highest profile busman’s holiday, touring with Macklemore after the unexpected success of the video for the rapper/singer’s song “Downtown” in 2015, for which Nally provided a striking visual presence to accompany his vocal cameo.

“I’ve been gone all year; I haven’t been home,” Nally says. “Full European tour, full U.S. tour, then we did the tour with Kesha, which was cool because Macklemore doesn’t tour with other artists often. He does, but it’s his circle. When the Kesha crew came, it was the first time since I’ve been touring with him where an outside artist was part of it.”

During all of Nally’s Macklemoring about, he’s also been almost pathologically busy working on new material of his own. In fact, he’s quick to admit that the excitement of the former has fed the success of the latter.

“These are all songs I worked on while I was traveling,” he says. “I’ve been putting these songs together as we’ve been going around the world, and using all that inspiration to make stuff as we go. In order to live, I have to be creating. When we’re on the road, on a bus together, we might as well do some creative stuff. It was definitely a lush and fruitful experience and I think all that just bubbles behind the curtain until it’s ready to explode.

“And then it does, all over your face.” During Nally’s post-Foxy career, he’s playing his solo music cards very close to the vest. That secrecy doesn’t spring from some weird, paranoid need for control but rather from a longstanding care with his creative process and its end result.

“It’s not like I’m just shitting out thoughts, it’s definitely organized,” Nally says. “I spend a lot of time thinking about it, putting it in the right position in my head. I hear the world thing — ‘You’ve got to get online, you’ve got to have a presence, you’ve got to push yourself, you’ve got to build’ — and I understand that, but first things first for me. I know how to value the online stuff and touring in general, but it’s also making sure it’s what I want to do.”

This caution isn’t a new wrinkle for Nally. He’s been working on solo material under the radar since his initial pairing with Macklemore on “Downtown.” During an interview about The Skulx in 2016, Nauth said he’d heard some of Nally’s new songs and proclaimed them “incredible.” But a proposed EP — first identified as a self-titled release and then given the title Madville (shorthand for Nally’s Madisonville neighborhood) — never materialized. Last year, he released singles from the project, “Ruby,” "Black" and “Believe,” all of which sported Nally’s superbly histrionic vocal style in the service of a decidedly Pop-based soundtrack.

Just after the first of this year, Nally dropped a fourth track, “Spirits,” very much in the vein of its predecessors.

And while he now has a completely different idea about how he considers what he refers to as “the Madville sessions” material, he knows that it’s all coming together under his singular creative umbrella. At this point, the ongoing Madville songs will be released as digital singles at sporadic intervals, while the material Nally has been creating during his roadwork with Macklemore will be released en masse as a group of songs under the title of Full Moon.

“It’s definitely theatrical, more of a whole-picture thing,” Nally says. “I try to think in terms of directors, to have a vision and be able to put it together in more than just a song. I want to expand and show my art as bigger than just a song. And the song is really important to me, but I’ve been focusing on seeing that bigger picture.”

According to Nally, Full Moon is less a beginning/middle/end concept album and more akin to a group of short stories that aren’t connected to each other beyond the presence of their central character.

“It’s not necessarily me, Nally, but I think the beauty of what I do is to try to make the song broad enough for people to interpret it however they want, so it’s universal and something everyone can relate to in a fun, theatrical way,” he says. “I’m not trying to take myself too seriously, I really just want to have fun and make it great.”

Nally sees the potential to take Full Moon out on the road, maybe even as an opener for Macklemore, but he’s still working out the concept for the live show. Like most everything he’s done of late, Nally will release the Full Moon music digitally and bypass a physical CD, and once that’s been accomplished (in the very near future, he says), he’ll return to other projects that he’s been concentrating on in recent months. But Full Moon remains the priority in this moment, and he is anxious for people to hear the result of his intense and undercover efforts.

“You don’t see the whole moon until the night of the full moon,” he says with a laugh. “That’s kind of the idea, to be honest. To just give them a little at a time, so when this rolls around, it should be a peak moment.”

Eric Nally knows about peaks. He’s scaled a few in his time and he’s poised to make his way up a few more before he’s done.