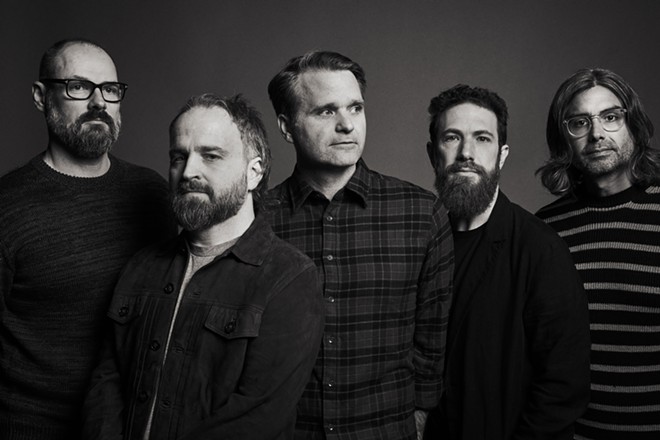 Has it really been 25 years since Death Cab for Cutie surfaced out of the Pacific Northwest? President Bill Clinton was beginning his second term and the Internet was not yet pervasive when singer/songwriter Ben Gibbard formed what would become an enduring outlet for his tuneful brand of indie rock marked by lyrics at once self-lacerating and universal.

The band’s 10th studio album, Asphalt Meadows, is set to drop Sept. 16, but the guys aren’t waiting to hit the road — an extensive North American tour kicks off with a stop in Cincinnati July 7 and concludes in late October with a pair of shows in their home base of Seattle. The record’s uncommonly terse first single, “Roman Candles,” opens with a persistent kick drum and driving bass before blossoming into glorious noise pop complete with military-style beats, processed guitar and soaring synths. Then there’s Gibbard’s voice, which still sounds like the indie rock version of James Taylor — modest but expressive, yearning but earth-bound.

“‘Roman Candles’ is about the crippling, existential dread that goes hand in hand with living in a nervous city on a dying planet, and that the only way to be in the moment is to let it all go,” the band said in a press release that accompanied the single’s release.

“The lyrics were cobbled from a couple of different songs dealing with my general sense of anxiety; the feeling that the fabric that weaves a functioning society together was crumbling during the pandemic,” Gibbard added in the same release.

Death Cab has played a handful of live shows over the last 10 months, each featuring songs from across the band’s discography, and now they’re enlisting the help of fans to dig out some deep cuts. “With a new tour comes new setlists!” Death Cab wrote in a recent Twitter post. “What older songs do you want to hear on the Asphalt Meadows tour that we haven’t played in a while? … Can’t guarantee we’ll tackle everything, but we’ll read your suggestions & take them into account!”

Death Cab for Cutie performs July 7 at PromoWest Pavilion at Ovation. Doors open at 6 p.m. Illuminati Hotties will open the show. There are no COVID-19 protocols. Info: promowestlive.com.