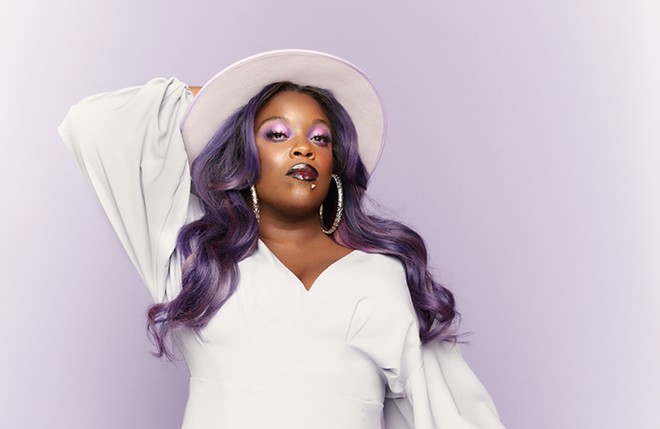 Stories abound of how musicians navigated the full-stop nature of the pandemic. For English singer-songwriter Yola, the extended COVID-19 pause gave her a chance to do a deep dive into herself with Stand For Myself, the follow-up album to her critically-acclaimed 2019 debut Walk Through Fire.

While her introduction to the public came as a Country-Soul force of nature who earned multiple Grammy nods, including Best Americana Album and Best American Roots Performance (despite hailing from Bristol, England), the woman born Yolanda Claire Quartey has expanded her stylistic palette considerably with Stand For Myself.

With Dan Auerbach of The Black Keys returning as producer, Stand For Myself finds the sounds of Yola’s childhood bubbling up and encompassing everything from hooky protest jams (“Diamond Studded Shoes”) and Bacharach-flavored Pop (“Like a Photograph”) to Gamble & Huff-style Disco (“Dancing Away in Tears”) and silk sheet R&B (“Now You’re Here”). In the process, Yola did a self inventory, having already worked to hold onto her center while weathering a tsunami of success.

“It became apparent during lockdown when I was adding songs to my coffer of tunes, that I was writing about something,” she says during a recent phone interview. “It felt like the arc of my journey from being a little of a dual-mapped person to seeming like I was on my path properly felt like the inspiration to the arc of this record, a moment where life had realized some sense of timing. I negotiated how to get that for myself and how to have control over my own life — not anyone else’s — just mine."

A major factor allowing Yola to find the greater truth she was seeking on this project was the presence and contributions of a female-centric supporting cast. Among the major contributors were less-familiar talents like Joy Oladokun and Ruby Amanfu and better-known names like Brandi Carlile and Natalie Hemby.

“I feel like with the first record, I was so surrounded by white men,” Yola says. “It was my connections with women of varying background, hue and persuasion that gave me this wonderful ability to truly excavate everything I needed to (dig up) on this record. I was blessed to have a clutch of women that would get me there fully understanding where I was trying to go. "

The Carlile and Hemby connection came via the Highwomen. Yola was invited to contribute to the self-titled 2019 album by the all-female supergroup, which also includes Maren Morris and Amanda Shires. Hemby caught Yola playing at Willie Nelson’s Luck Reunion Festival, professed her love of the latter’s debut album and insisted she was going to hip Carlile to the British vocal powerhouse. The Highwomen project followed in its wake, and doors of opportunity continued opening for Yola.

“When I flew over to RCA Studio A in Nashville, I became fast friends with Brandi,” Yola says. “She said to bring a song and this was what they were thinking of doing. It became the connector to so many things. I met Brandi along with Natalie Hemby, who writes on five out of the 12 songs on my current record. I met Maren (Morris) and Amanda (Shires) there. I met Dave Cobb there. Obviously, I’ve been on the road with Dave and Chris Stapleton as well, so we got to see quite a lot of each other."

As if a year full of touring dates isn’t enough, Yola will be appearing in Baz Luhrmann’s forthcoming Elvis biopic, in which she plays Gospel-star-turned-Rock-&-Roll pioneer Sister Rosetta Tharpe. Yola was thrilled to play that role, particularly given how Tharpe’s sound fits alongside the 30-something’s rougher-edged childhood influences like Mavis Staples, Tina Turner and Otis Redding.

“With this role, I get to redress some of the inconsistencies in Rock & Roll’s etymology,” Yola says. “It’s a great privilege to be able to talk about that and bring it to the fore for people. I know (as Tharpe) I’m the jump-off point for Elvis, as a character in the movie, but without me, you don’t have him. Without him, you don’t have the entire scene.

"The main thing is how (Tharpe) gave people showcases and discovered them. She singlehandedly brought us people that might not have been seen or heard of at the same level, as well as obviously inventing that style of playing that nobody was doing. No one had been distorting their amp and playing and no one had been bending the strings the way she was — or at all. All of this innovation changed everything. Plus she was very out about being queer.”

Yola is eager to share the entirety of her Stand For Myself material now that pandemic numbers are plunging and venues are opening, Anchored by the rhythm section of bassist Nick Movshon (Sharon Jones; Amy Winehouse) and drummer Aaron Frazer (Durand Jones and the Indications), Yola promises both substance and sizzle with her show.

“I knew this record needed a rhythm section steeped in Disco and Funk,” she says. “Feel in the pocket was paramount to the drum sections we had."

And she's happy to have people finally get to hear the full record live.

"We’ve been opening for Chris Stapleton doing short sets, so finally we get the full fat arrangement, delivery and everything," she says. "I learned about how I connect to this record and what is coming to the fore in these live performances. It’s also an opportunity to present these topics that can be either taken on either a surface or deeper level and meeting people where they’re at.”

Yola plays the Taft Theatre (317 E. Fifth St., Downtown) at 8 p.m. on March 12. Tickets start at $27.50. Guests must show proof of vaccination or a negative COVID test for entry. Get tickets and more info at tafttheatre.org.