The Cleveland Transgender Choir creates a safe, welcoming place for trans people to express themselves without fear. 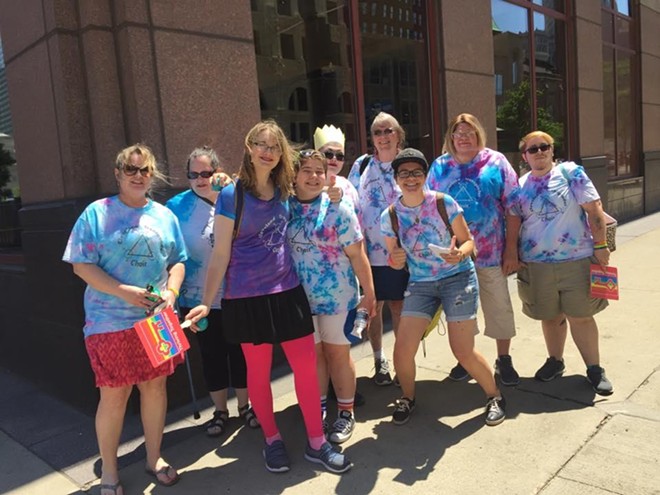 Co-founded and directed by Tracy Grady, the Cleveland Transgender Choir is a small ensemble of transgender and non-binary singers at Baldwin Wallace (BW) University. The choir was founded in 2016 and performed at various Pride events in northeast Ohio, but after COVID-19 hit in 2020, rehearsals had to be put on hold.

The choir has grown to fourteen singers, the largest the group has ever been.

The group found its origins when Grady – who has been teaching voice at Baldwin Wallace for 23 years – was working with a trans voice client who was struggling to find her place in BW’s women’s chorus.

“Even something like, ‘Where do I stand?’ is not simple,” Grady explains.

Chorus ensembles traditionally arrange their singers by vocal range along the gender binary. Grady had different priorities. “I don’t care if you sing high, sing low, switch back and forth,” says Grady. “Just don’t forget your music!”

The Transgender Choir takes a member-led approach to choosing their music each semester. “It’s a lot of Google Forms,” says Tracy.

First, singers select their favorite genres of music and then suggest specific songs. Tracy vets the songs with an ear for whether the current choir’s range can support it, then narrows a list down for voting.

Like BW’s Transgender Voice Clinic, this choir is about creating a safe and welcoming space for trans people to express themselves without fear.

For Grady, her passion for trans voices and the importance of the Cleveland Transgender Choir is deeply personal.

“My best friend since fifth grade is a trans woman who loves music and singing,” explains Grady. “I want my best friend to be able to sing without fear of judgment, fear of worrying about where to stand, fear of having to present a certain way.”

Being able to see the confidence in self-expression of her singers is what keeps that passion going. She tells a story of a high school student who joined when the choir first started.

“She came to rehearsal in baggy clothes and a hoodie with the hood up, and she didn’t really talk,” remembers Grady. “After several months, she came to rehearsal in a skirt, she had highlighted her hair, her makeup was beautifully done and she just looked gorgeous and comfortable and confident. As soon as she came into the room, everybody burst out cheering. Moments like that really make it even more worth it. Just to see this amazing young person come into herself.”

The only member of the Cleveland Transgender Choir who isn’t trans is Grady herself, who says, “I think of directing this choir as a way to hold the spot until a trans musician can fill it. I have privilege as a cis singer, and I feel very strongly about using that to advocate for and create space for trans voices.”