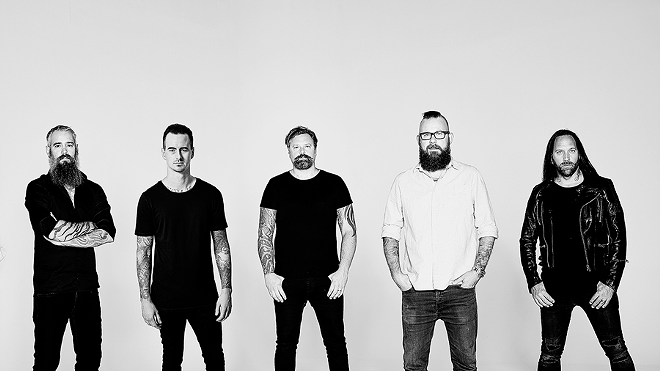 Photo: Provided
In Flames
For the past 26 years, Swedish Alternative Metal outfit In Flames has been less a band and more a state of mind. Early on after its formation, In Flames utilized numerous session musicians to accompany permanent members, not even gelling as an actual unit until the band’s second full-length, 1996’s The Jester Race. The only thing more malleable than In Flames’ lineup has been its musical direction, which has morphed from a melodic Death Metal sound, which was groundbreaking in its day (and also championed by peers At the Gates and Dark Tranquility), to more conventional AltMetal, a shift that clearly earned them more fans than it alienated (though it did alienate a good many).

In Flames began as a side project in 1990 when guitarist Jesper Strömblad was looking for a more melodic outlet than Ceremonial Oath, his Death Metal band at the time, could provide. Within three years, Strömblad made In Flames his sole concern and filled gaps in the band’s permanent membership with an ever-changing parade of session instrumentalists and vocalists. Even after Strömblad settled on a solid lineup in 1996, In Flames’ roll call remained in a nearly constant state of flux; to date, the band has featured the efforts of close to 25 full- and part-time members, and even Strömblad himself departed in 2009 in order to address his longstanding alcohol issues. By then, In Flames had fully embraced Alternative Metal, to the chagrin of its more entrenched traditional Death Metal fan base, which largely abandoned the group after 2003’s melodic and hugely popular Reroute to Remain.

Even with the internal tumult the band has endured over the past quarter century, In Flames has been one of the most successful Swedish Metal bands of its time. The quintet, now featuring former RED drummer Joe Rickard, has recorded 12 studio albums, including the just-released Battles, four EPs and three live sets, including the CD/DVD Sounds from the Heart of Gothenburg. In addition, In Flames has been nominated for three Grammis Awards, Sweden’s Grammys equivalent, and won twice, it’s been cited as an influence on any number of melodic Death Metal bands that formed in its wake and the band’s global fan base increases incrementally with each new release.