The Lone Bellow will perform at Memorial Hall on Oct. 29. 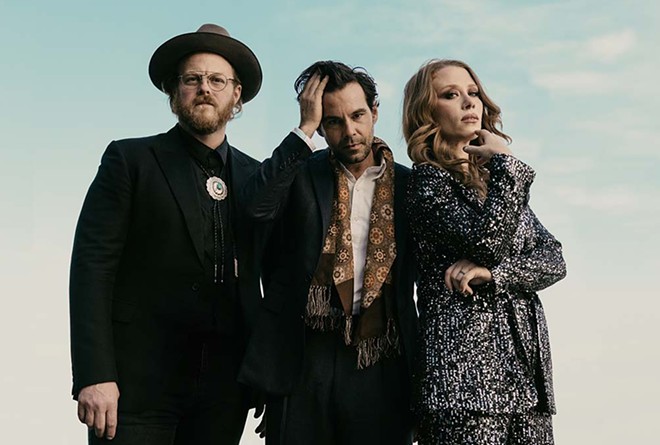 It’s clear that Half Moon Light is not your average Americana record when you hear the opening piano chords ring out in a stately, gospel style – and then learn that the notes from the 1905 hymn “The Eastern Gate” are played by a band member’s grandmother at a funeral.

But that’s The Lone Bellow, always trying to bridge the gap between family and fans and explore what connects them.

This five-piece indie-folk/pop band has come a long way in recording four records and relocating from Georgia to Brooklyn, finally settling in Nashville, their current home. On 2020’s Half Moon Light, The Lone Bellow’s most recent record, they dial back their most rousing impulses and instead tap into a deeper, more intimate vibe. Weighty songs about death, marriage, betrayal, and immigration problems abound here – and yet somehow the music never sounds too ponderous.

CityBeat spoke with lead singer Zach Williams by phone as the band trekked by van through the Southwest on the historic Route 66 before their Oct. 29 Cincinnati show.

“Half Moon Light came out 15 days before the pandemic. I feel like the songs maybe helped people,” Williams says. “There is one song called ‘Dust Settles’ that sums it up: ‘Here we are now, lonely together.’ So crazy that we made that song before it all happened.”

Known for their stirring live shows, The Lone Bellow thrive on three-part harmonies that ebb and swell among main singers Williams, Kanene Donehey Pipkin and Brian Elmquist. This trio’s vocal interplay hums with energy on stage, and their music’s acoustic to electric dynamics set up a warm haven for rootsy deliverance.

Williams likes to focus on the communal bond that develops between performer and audience.

“Playing the songs from Half Moon Light now is such a great handshake between us and the listener, because some people have been listening to this stuff for two years,” Williams says. “We recorded 18 songs, and it was hard to pick which ones made that record. But because we all write together, everything was super-intentional and honest.”

The role of family provides a special catalyst for The Lone Bellow in crucial ways. The band’s origin story recalls Williams starting to write songs and play guitar as therapy for dealing with his wife’s temporary paralysis from a horseback-riding accident. They made a pact to move to New York City for Zach to pursue music if she recovered – and she did – which triggered their move from Georgia to Brooklyn in 2005. Pipkin’s husband Jason also plays bass and co-writes songs with the band.

As a unifying thread through Half Moon Light, Williams pitched the idea of placing taped fragments of his grandmother playing “The Eastern Gate” on piano at the start, middle and end of the record: “Intro,” “Interlude” and “Finale,” as they’re now listed on the album. What made this a special idea was that Williams had a recording of her spontaneously playing the hymn during his grandfather’s funeral.

“When it happened, no one had heard my grandma play the piano for decades,” Williams says. “It wasn’t planned at the funeral – at the end she just wandered up and was like ‘I’m playing this now for my husband.’ It was stunning and in the old way she used to play – very banging, gospel style.”

“When we were making the record, I said, ‘Guys, this moment happened, and it was recorded in a funeral home video,’” he recalls telling the band.

These sepia-toned, aural jewels imbue the record with a poignant gravitas and inspire the Lone Bellow to explore more emotionally authentic songs. For instance, Elmquist writes about reconciling with his father before his recent death on the moving, urgent “Wash it Clean.” Pipkin’s angry “Just Enough to Get By” measures the long-term damage that secrets can inflict on a life. Williams’ “Wonder” exuberantly sketches the memories of an ex-lover with pulsing acoustic strums; he also alludes to Paul Simon, a major influence, in the opening lines.

Implied in its title, many songs on Half Moon Light reflect the paradox and possibility in life and all the different shades between light and dark. You can hear this in the healing epiphany of “Count on Me,” in which Williams sings, “Let it break you/let it help you lay down what you held onto.” It’s also obvious on “Enemies,” an ironic love song to Williams’ wife, recounting just how much the two have shared and endured.

Cincinnati’s own Aaron Dessner of The National produced Half Moon Light, his second time around with The Lone Bellow after producing their second record, Then Came the Morning. The band recorded the latest one at his studio in upstate New York.

“Aaron has so much patience and vision at the same time. He has this beautiful way of listening to your ideas, but then also listening to things you didn’t know you were communicating,” Williams says. “That’s my favorite thing about him – he pulls things out you didn’t know were there. He also honestly believes in you more than you believe in yourself. Then he puts that into the music. Really, his sense of hospitality mixed with his musicianship is just stunning.”

Dessner also wrote a guitar riff in memory of his friend Scott Hutchinson of the band Frightened Rabbit, who committed suicide in 2018. He gave this to Elmquist, who then wrote “August,” an acoustic ode and the record’s last original song and segue to the finale. This is the final fragment of Half Moon Light – Williams’ grandma pumping out a hymn with her six adult Williams children’s voices joining in.

On tour now, The Lone Bellow are playing songs from the upcoming album, Love Songs for Losers. After working with producers such as Dessner and Dave Cobb on 2017’s Walk into a Storm, the group decided to produce themselves on the new record for the first time. The Lone Bellow recorded it in Roy Orbison’s old house in Hendersonville, Tennessee.

“Nothing was off the table. We had some fun, swinging for the fences on a few of these songs. We wrote honest love songs,” Williams says. “But we have different colors on this record.”

“I think self-producing it for the first time, we were able to concentrate on things we hadn’t before,” Williams continues. “Kanene took the reins and really produced the vocals and coached me and Brian and worked on this for hours and hours. We had never really done that before.”

The Lone Bellow plays at 8 p.m. Oct. 29 at Memorial Hall, 1225 Elm St., Over-the-Rhine. Alt-rock band Bailen will open the show. There are no known COVID-19 protocols in place. Info: memorialhallotr.com.