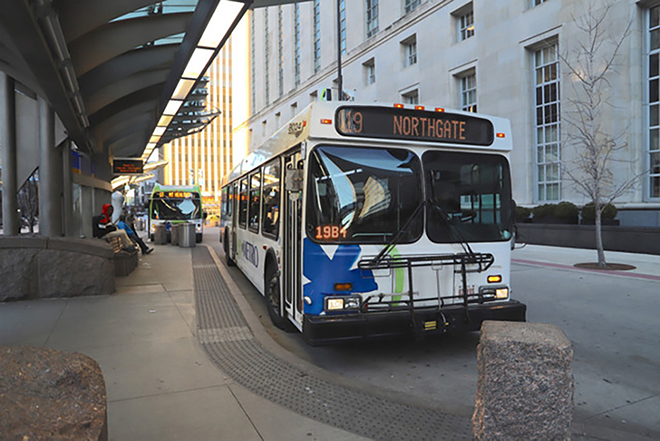 Photo: Nick Swartsell
SORTA and Metro are conducted a study to determine which bus rapid transit corridors will make the biggest impact on its riders.

Cincinnati Metro has announced which two corridors will be the first in the region to get Bus Rapid Transit (BRT) routes.

The Hamilton Avenue and Reading Road corridors were chosen after Metro conducted months of community engagement and analysis. Metro says that the other two corridors that were in the running, Glenway Avenue and Montgomery Road, will still receive “enhanced treatments” as a part of the project.

“We’ve worked diligently to understand where we should begin implementing BRT in the region and believe this decision will launch BRT successfully in Hamilton County, and give us a solid foundation to expand,” Khaled Shammout, chief strategic planning, development and innovation officer for Metro, says in a news release. “That said, we also know the Montgomery and Glenway corridors are very important segments of the Metro system. Based on the study, we’ll also boost services and amenities along these two corridors to better serve those communities.”

BRT is part of the Reinventing Metro plan, which was approved by Hamilton County voters in 2020 with the passage of Issue 7, which provides additional funding to support new transit innovations. Metro says construction on the two corridors is scheduled to begin sometime in 2025, with the Federal Transit Administration helping Metro along the way to stay on schedule. 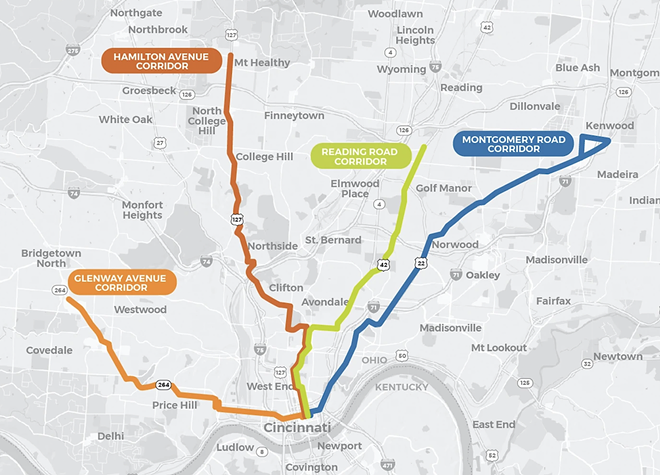 The Reading Road Corridor extends 12 miles from the intersection of Reading Road (U.S. 42) and S.R. 561/Seymour Avenue to downtown Cincinnati.

Other Metro routes already along the Reading Road corridor include Route 43 (Summit Road to MLK), Metro*Plus (Burnet Avenue to Downtown), Route 46 (Taft/McMillan to Downtown) and Route 78 (MLK to Downtown).

“The closest comparison is if you’re familiar with taking rail,” Jones said at the time. “It moves faster through a corridor, there’s off-board payment, a lot more convince to get a long distance, but it has the flexibility of being on rubber tires.”

Jones said BRT is more like a train than a bus because of how infrequently it stops, both for passengers and for traffic lights. Any BRT corridor will need its own dedicated bus lane to make the speed and efficiency of the rapid route possible. Because more riders will board BRT at once, they'll pay their fare in advance, speeding up the process. Even though there will be fewer stops, Jones says riders can expect a BRT bus to arrive every 10-15 minutes.


The other BRT difference that speeds up the route is signal priority.


“When a traffic signal realizes that a BRT bus is approaching – say there is a green light – it’s going to stay green longer to let the bus get through the corridor or just give the priority to the bus so you’re not getting stopped at as many lights as a car would,” Jones said. “In some ways, you may be able to get through the corridor faster than you can in your personal car.”