It’s too late for a historic home built by one of Cincinnati’s earliest families. But will the debate over its demolition change development in the city’s most desirable neighborhoods? 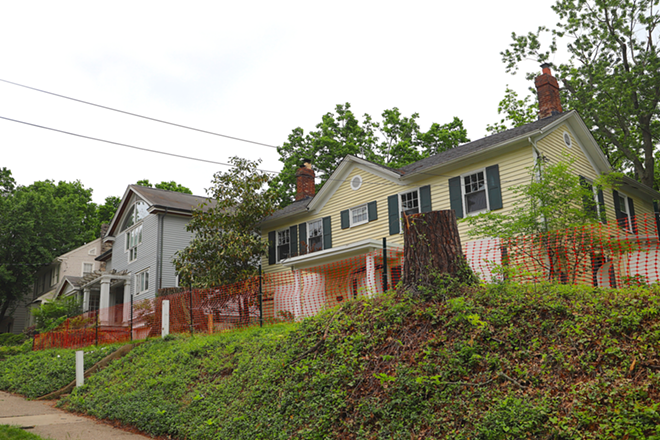 Nick Swartsell
Opponents of the May 19 demolition of 1228 Grace Avenue in Mount Lookout, a historic home built by one of the city's first families, say it illustrates deeper concerns around residential development in Cincinnati.

Isaac Ferris and his family settled near Cincinnati sometime in the late 1790s, just a few years after the city was formally established as a huddle of wood frame buildings close to the Ohio River. He helped found one of the Northwest Territory’s first Baptist churches and built an estate in the green, gentle hills north of the city.

When he did, Ferris probably had no inkling that one of the houses on that estate would some day be at the center of a feverish battle over development in present-day Mount Lookout and Hyde Park.

But the May 19 demolition of 1228 Grace Avenue in Mount Lookout — likely built by the Ferris family in the 1820s, just a few years after Isaac’s death — has become a focal point for a larger discussion. While it's too late for that property, residents and some city officials hope to stave off similar situations in the future.

The debate over houses like 1228 Grace centers around a number of issues, from tax deals the city gives developers to demolitions of older homes in the neighborhood and Hyde Park next door, specifically in conjunction with a practice called “lot splitting,” in which a developer puts two homes on a lot that was once occupied by a single family house.

Today, Ferris would likely be astounded at the neighborhoods that have grown around the family homestead. They’re among Cincinnati’s most desirable, with grand old houses built 100 or more years ago holding court in large, well-manicured lawns framed by soaring mature trees. The historic Cincinnati Observatory, the oldest in the country, has been in the area since 1873. The former suburbs boast some of the best schools — and highest property values — in the city. The median household income around Ferris’ old homestead is $115,000 a year — $80,000 above the city’s median.

“A number of properties in both neighborhoods have larger than average parcels,” Cincinnati city planning staff member Jared Ellis told the Cincinnati Planning Commission at a recent meeting about possible measures to slow down demolitions. “Over the past decade, those parcels have been undergoing demolitions and lot subdivisions, creating new subdivisions that don’t always blend in with the character of the surrounding homes.”

The seemingly arcane development practice has drawn big controversy and surprisingly fast response from elected officials. After outcry over the pending demolition at 1228 Grace Ave., Mayor John Cranley released a statement earlier this month announcing he was working on a solution.

“It is likely the case that the owner of the property on Grace can ultimately tear down the house,” Cranley said at a May 18 meeting of the Cincinnati Planning Commission just before the house was demolished. “But it doesn’t mean he should. I would humbly ask that he reconsider the character of the neighborhood and his own interests of doing something consistent with community wishes.”

That’s an unusual stance for Cranley, who worked as a developer before his 2013 election and who has often been very friendly to the development community. Just last week, Cranley characterized battles over community input regarding an FC Cincinnati stadium in the West End and a large expansion of Cincinnati Children’s Hospital in Avondale as “scary” in a Cincinnati Enquirer column. In both of those instances, community councils opposed large-scale development projects, but the city went ahead with key approvals for them.

In this case, however, the mayor wants developers to slow down.

Acting City Manager Patrick Duhaney requested an emergency, 100-day planning commission approval process on May 15 for demolition permits and lot subdivisions in the neighborhoods while the commission studied possible zoning changes. If necessary, that process could be extended by another nine months. One of the possible outcomes: a neighborhood conservation overlay in Hyde Park and Mount Lookout that would tighten zoning restrictions.

The planning commission approved the temporary process May 18, and Cincinnati City Council will mull its final approval, likely this week. Previously, demolitions had to get city approval, but didn’t go before the commission for consideration on how the tear-downs would affect the neighborhood at large. Lot splits, meanwhile, didn’t require any government approval beyond the normal construction permits unless a developer was splitting more than five lots during a project.

A previous 2015 effort to get a more wide-ranging set of restrictions on development in the neighborhoods failed, but the commission that year did pass a very tightly-focused interim development control district for Menlo Avenue in Hyde Park in response to a potential development that involved demolitions.

Developers aren’t happy about the commission’s most recent decision.

Splitting a lot is what developer Angelo Pusateri, who purchased 1228 Grace Ave. in March for $522,000, wants to do. The planning commission’s recent action can’t stop him from tearing down the house — he filed his permit for demolition before the commission approved the new temporary process — but could prevent him from splitting the lot, which may make his plan less profitable.

Richard Paolo, an attorney who represents developers like Pusateri, says the city needs to reconsider.

“Many of my clients, including those in the building and development community, live in the Hyde Park or Mount Lookout area,” he says. “They love that area. Why the rush to do this now, when you have development controls in place? When there are concerns with specific homes or streets, why use the sledgehammer proposed now in two communities for which there has been little study and simply a reaction over the demolition of a home?”

But neighbors of the property are up in arms over Pusateri’s plans.

There’s an often-pejorative name for residents who oppose development in their neighborhoods — NIMBYs, which stands for “not in my back yard.” The term has come to symbolize residents who oppose all development out of hand, keeping housing in short supply and spiking housing costs. But the reasons to push back against development are varied. Residents sometimes oppose projects because they contain affordable housing, other times because the projects do not. Sometimes they’re concerned about historic preservation or traffic issues.

Opponents of the demolition on Grace Avenue and other nearby historic homes say they’re not against all development, but are fighting back against developers who want to build million-dollar homes that they say don’t fit in with the existing architecture onto single-home lots, often with tax deals in hand. Developers will sometimes buy a $600,000 property, demolish the house standing on it, and put two homes costing a million dollars or more on the plot.

Hank and Laurie Brinker have lived near the Grace Avenue property for 45 years in another Ferris estate home — one the Hamilton County Auditor’s site says was constructed in 1806. They and their daughter, Julie Brinker Wijesooriya, are concerned about the house and the character of the neighborhood should it be torn down.

Wijesooriya attended a May 18 Planning Commission meeting to voice her support for the new measure.

At that meeting, Wijesooriya spoke on behalf of her parents, because she said the developer had put a restraining order out against them.

“I grew up knowing the Ferris family, and many Ferris relatives came through the home,” she told the commission. “There’s obviously an emotional element for (my parents), and a sadness. They’re also concerned because they have a home built in 1806. They’re in their 70s. What happens when they need to sell?”

Others are also upset.

“Just yesterday, we watched the demolition of yet another historic house just across the street from the Ferris house,” says Karen Robertson, who lived in 1228 Grace Ave. for more than a decade. That house was built in 1850. “As we watch all these historic houses bulldozed around us, our neighborhood’s charm and character slowly erode. With the pending demolition of the Ferris house, another piece will be gone.”

Robertson is one of a number of people with another concern: very often, the million-dollar homes developers are building are tax abated for up to 15 years, meaning families moving into them only pay the property taxes due before construction, which is a fraction of the ordinary tax liability they would face. That’s incensed long-term residents, who say their property taxes have doubled or tripled over the years as the real estate market in their neighborhood gets hotter.

In the past ten years, the city has approved well north of $160 million in tax abatements for construction or rehab of more than 1,300 residential properties. The total value of abated properties in the city has climbed close to $1 billion from roughly $600 million a decade ago.

“In light of the city’s financial crisis,” Mount Lookout resident Michael Tombragel asked at the planning commission meeting, “why are we subsidizing the wealthy to build their million-dollar homes in the most desired neighborhoods? It’s ok to subsidize distressed neighborhoods, but it makes zero sense in a desirable neighborhood. We’re rewarding them for building their dream homes while the rest of us get stuck paying the taxes for city services.”

Developers have pushed back against the idea that they’re just cashing in, though.

“I think there are a lot of misconceptions and misinformation about tax abatements,” Paolo says. “Properties are still taxable under abatements. It’s because of these abatements that tens of millions of dollars have flowed into these communities.”

On top of that, the higher value of the homes they are building corresponds to new demands from buyers, some developers say.

“Ninety percent of the time, it’s not just buy a property, tear it down, and build," says developer Brad Olinger, who sits on the board of the Home Builder's Association of Greater Cincinnati. "But customers are lining up at the door and they want new amenities. They don’t want houses with deteriorating basements. They don’t want the cost of maintenance for fixing it up. All of our communities have beautiful homes that probably shouldn’t be torn down, but they’re just too far gone and economically, it just doesn’t work to fix them.”

Cranley says he’s open to looking at restructuring the way the city does abatements, but that the demolitions in Mount Lookout and Hyde Park will continue unless the more immediate issue is addressed first.

“Maybe it’s worthwhile for a lot of reasons to reevaluate the tax abatement policies,” he says. “I’m open to that. But I don’t want the community to get false hope that if we end the tax abatement program, these lot splits will stop happening. In my strong opinion, the most important thing we can do today is change the policy on lot splits.”