Guest Commentary: The Mother of a Transgender Child on Why Her Family is Leaving Ohio

"We aren’t the first family to leave this state for one with protections in place, and we won’t be the last." 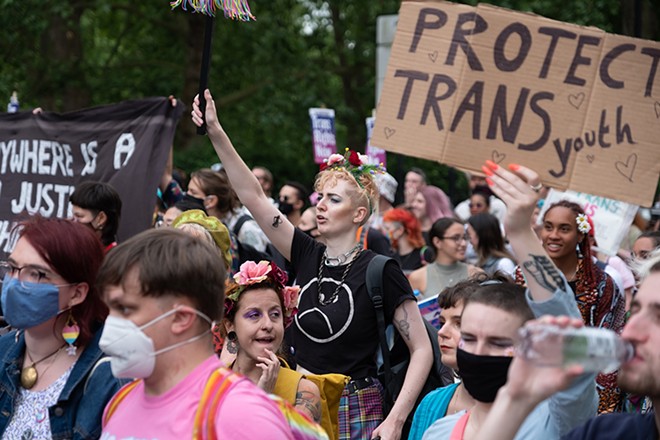 Editor’s Note: The letter below was submitted to The Buckeye Flame by a parent who is in the process of moving her family out of Ohio state because of proposed legislation, including House Bill 454, which would ban gender affirming care for her 11-year-old transgender child. The Buckeye Flame generally does not publish letters or commentary without including the name of the author. In this case, the parent asked to be anonymous due to fears related to physical and emotional safety the child and family members. The Buckeye Flame has taken steps to independently verify the identity of the parent and details included in the letter.

Exit interviews do not exist when leaving one state for another. I think it’s important that you know why my family is leaving Ohio.

Four years ago, our child was bullied in private school for being “a boy with long hair.” At the age of six, we had to go to Akron Children’s Hospital because they were suicidal with a plan in place. After lots of counseling and support groups they looked us in the eyes and said, “Mommy, Daddy, I’m a girl.” From that moment on, she began living her truth. Her confidence increased significantly, and she is so incredibly happy! Akron has been nothing short of loving and accepting. Akron Public Schools has stood by our side and treats her the same as any other child.

While our local community has been wonderful, the state of Ohio has not.

Last year a bill was passed giving medical professionals the right to refuse to treat an LGBTQ person. Presently, HB 454 seeks to deny my child access to gender affirming care and prevent insurance from covering her treatment out of the state. As she gets older, she becomes less of an adorable girl and more of the unknown other. Did you know that in Ohio it is legal to murder a transgender person, if you tell the court that they didn’t disclose it to you?

I’d be surprised if HB 454 doesn’t pass. Regardless, more hateful and discriminatory legislature is coming down the pipeline. This bill is a gateway to taking well-adjusted and happy children from loving families and incriminating their parents. (Not to mention increasing the suicide rates for transgender adolescents).

I’m a registered nurse. Everything I do at work is the result of evidence-based practice (EBP). This bill directly impacts medical treatment and is not founded in EBP, nor is there any factual science to support it. In its simplest form, gender affirming care is the pride pin and pronouns badge backer I proudly wear at work. With HB 454 in place, should a minor see it, my license could be taken away. My daughter is in 5th grade and learned how to find credible sources this year. Maybe our government officials need to take a seat in her English class and learn this as well?

I’ve been fighting the fight for a couple years now and I’m tired of fighting. Our concerns fall on deaf ears. The people who need to hear our story, and the stories of families like ours, are never heard by the ones who need to hear it. The blood of Ohio’s children falls solely on the hands of our elected government officials. I’d like to know where the public outrage is. Quite frankly, few outside of the trans community are showing up to help. This bill supposedly protects Ohio’s children – the ones who are white, Christian, heterosexual, and cisgender – while harming the ones who don’t fit the criteria exactly.

We aren’t the first family to leave this state for one with protections in place, and we won’t be the last. I was reading an article this morning that Ohio has more job openings than unemployed people to fill them. You would think the state would be doing everything it could to retain its population and attract new residents. HB 454, and the upcoming HB 616, will not help that cause.

This is my last attempt at helping those who are unable to move to a place of refuge.

Disrespectfully,
The Mother of an Ohio Family Leaving Soon

The Buckeye Flame is an platform dedicated to amplifying the voices of LGBTQ+ Ohioans to support community and civic empowerment through the creation of engaging content that chronicles their triumphs, struggles, and lived experiences.

Doctors Discredit Ohio Transgender Sports Bill as Extreme Overreach: “Let me perfectly clear, this extreme legislation, which would require children to have genital exams to play high school sports is nothing short of state-sanctioned sexual abuse."

Guest Commentary: Ohio Republicans Celebrate Pride by Creepily Bullying Female Athletes and Trans People: Ohio's transgender sports bill comes with a “verification process” of checking the genitals of those “accused” of being trans.