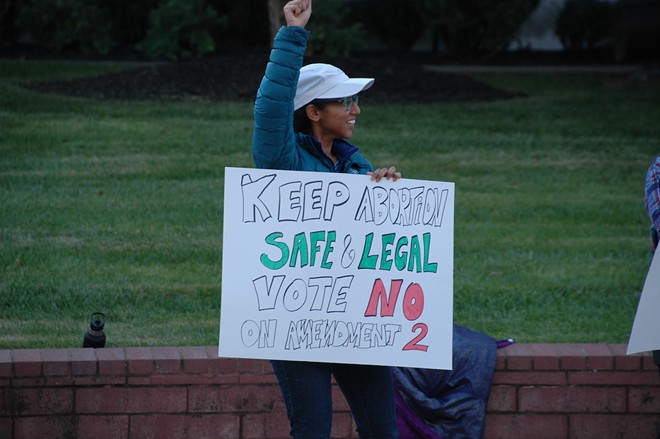 
Pro-choice demonstrators rallied across the country on Oct. 8 during the “Women’s Wave,” organized by Women's March. In Covington, a small but boisterous crowd of protestors called on elected leaders to restore abortion care access to Kentuckians.

“I think I want people to know that this fight isn’t over. There was a lot of attention when the Dobbs decision was first made," Northern Kentucky resident Micayla Lewis told CityBeat, referring to the U.S. Supreme Court's June 24 decision in Dobbs v. Jackson Women's Health Organization to reverse Roe v. Wade, which had granted the right to privacy to pursue an abortion for nearly 50 years. "Obviously there’s a lot of world events going on, but it’s important to keep remembering that this is a fight we’re still having and it’s not going away.”

Many of the signs raised at the rally read “Vote NO Amendment 2,” referring to the state constitutional amendment Kentucky voters will consider on Nov. 8.

Amendment 2 asks voters if they want to put a sentence into the state constitution that could effectively outlaw all abortions in the state: "To protect human life, nothing in this constitution shall be construed to secure or protect a right to abortion or require the funding of abortion."

Melissa Frazier attended the Oct. 8 rally in Covington. She said the future of abortion care access in the state is all about who shows up to vote on Nov. 8.

“I think it’s hard to change minds, so we have to drive turnout among those who don’t normally vote,” Frazier said. “I think the shift is getting people to understand that abortion care access is about healthcare.”

KY Voters Will be Asked to Decide on Abortion Amendment on November 8 Ballot: Kentucky's voter-registration deadline is Oct. 11.

The same reasoning was applied in Ohio on Oct. 7 when a Hamilton County judge blocked the state’s six-week abortion ban indefinitely. After hearing testimony from doctors and scholars on both sides of the debate, Judge Christian Jenkins maintained his ruling that abortion is a medical decision.

“As we’ve heard today, there is not any legitimate dispute that abortion is a medical procedure…and it is undoubtedly health care,” the judge said on Oct. 7 during the ruling.

Fraizer said fighting to strike down Amendment 2 is not enough and that Northern Kentucky residents also need abortion care access in Cincinnati.

“Really, in Northern Kentucky if you want an abortion, you’re going to go to Ohio,” she said. “Of course, now we’re in the middle of an abortion desert. Ideally, we would like the entire Tri-State area to be in lockstep in having access to abortion so their own healthcare systems don’t get overwhelmed.”

Kristen Ritchie said Kentucky can follow in the footsteps of other states that have been asked to vote on their right to abortion care.

“We really need the women to get out and vote [for] pro-choice candidates, Ritchie says. “Kansas showed it could be done. Kentucky can do it, too.”

In Kentucky and Ohio, the deadline to register to vote is Oct. 11. Visit the Kentucky state board of elections and Ohio secretary of state websites for details.