From staff-picked cheap eats to a winning whodunnit, here are the stories you'll find in CityBeat's latest print edition. 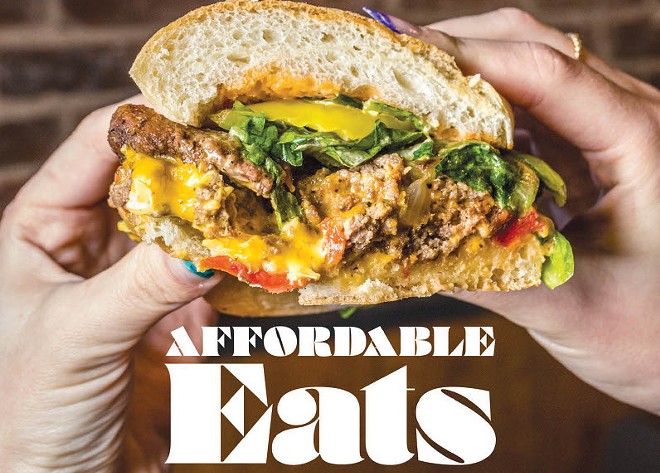 With inflation sending grocery costs soaring, high gas prices and a looming recession, the saying “a dollar doesn’t go as far as it used to” feels more apt than ever these days, especially when it comes to dining out. It may seem like you can’t even grab lunch anymore without shelling out at least $15, but, in CityBeat's annual Dining Guide, staffers have compiled a list of 25 of their favorite spots in the Greater Cincinnati area for an affordable meal for $13 or less (yep, you read that right, penny pinchers). Read CityBeat's latest issue, on newsstands now, to read more about this partnership and other stories.

Affordable Eats: 25 Greater Cincinnati Spots to Grab a Meal for Under $13
By CityBeat Staff
While chili parlors and diners are always a great option — as are the Reader Pick winners of CityBeat’s 2022 Best Of Cincinnati “Cheap Eats” category: Skyline, Zip’s Cafe and Goodfellas — the following spots offer something beyond a 3-Way. Ringing up for $13 or less per diner, these are not multi-course, sit-down dinners, obviously, but they’re all super-satisfying options to fill you up without breaking the bank. Read CityBeat's story to find out which Cincinnati restaurants made the list.

Review: 'Murder on the Orient Express' Pulls into Downtown Cincinnati for a Winning Whodunit
By CityBeat Theater Critic, Rick Pender
If you’ve been paying attention to the Cincinnati theater scene, you probably know that the Playhouse is not “in the park” this fall while construction wraps up on its new mainstage. As a result, three Cincinnati Playhouse in the Park productions will be presented elsewhere this fall. The first, a theatrical adaptation of Agatha Christie’s Murder on the Orient Express, has opened a three-week run at the Aronoff Center’s 437-seat Jarson-Kaplan Theater. It’s all aboard for playwright Ken Ludwig’s 2017 clever recreation of the prolific mystery writer’s 1934 novel, which depicts the famous detective Hercule Poirot solving a murder on a luxurious train traveling across eastern Europe. Read CityBeat's story to learn more about what makes this spooky season favorite a must-see.

Cincinnati's Alphas Comedy Troupe Empowers Women Through Creativity
By Sean M. Peters
Just as we celebrate shopping local, we also should prioritize laughing local — that’s where the comedy troupe Alphas can help. The all-women group performs an original variety show every month at Clifton Comedy Theatre and say they’ve sold out every performance in their half-year together. Alphas was founded by director Patricia Mullins and consists of 21 local writers and performers, all of whom identify as women. Each month’s shows center around specific themes; August’s focused on spies, and the most recent performance concentrated on time travel. Read CityBeat's story to find out more about Alphas' special mission.

Kurt Vile Coming to Cincinnati with Plenty of Philadelphia Freedom
By Jason Gargano
Kurt Vile can be hard to pin down — a long-haired, skinny-jeaned 42-year-old with melodies for miles and a mind that moves in unexpected directions. The Philadelphia-bred singer, songwriter and ace guitarist is a self-described musical obsessive, the kind of guy who immerses himself in every aspect of his chosen endeavor. Read CityBeat's story to find out more about Vile's latest album, (watch my moves), ahead of his Cincinnati performance later this month.

Artists Curate Music, Dance, Visual Art and Trusted Space in 'Warmth'
By Katrina Eresman
In early 2022, Cincinnati artists Alex Stallings and Cj Wooten brought a new music exploration series to the Queen City.WARMTH Culture is led by queer individuals and people of color and is named for the safe and welcoming energy each event strives to create. With a focus on hip hop, R&B, and house music, Warmth has thus far succeeded in bringing the good vibes to spaces like the Mockbee and 21c’s Gano Alley. Warmth’s next activation again will fill Gano Alley with a live DJ showcase and dance performances during BLINK on Oct. 14. Read CityBeat's story to learn more about WARMTH Culture's impact in the local arts scene.

Sound Advice: Viagra Boys, shame to Bring Catchy Punk to Woodward Theater
By Brent Stroud
One of the most exciting shows to come to town this year will be at the Woodward Theater in Over-the-Rhine featuring two of the most significant punk bands to emerge in recent years: Stockholm, Sweden’s Viagra Boys and London’s shame (stylized with a lowercase S), along with Los Angeles band Kills Birds. All three bands have received plenty of critical acclaim and come with proper intensity and inventiveness. Read CityBeat's story to find out more about the bands' journey to indie music stardom.

Sound Advice: Cincinnati-Based Turtledoves to Serve Lush Harmonies at MOTR Pub
By Eric Bates
Turtledoves, a synth and guitar duo from Cincinnati comprised of Alex and Ashley McGrath, pride themselves on enveloping their live audience in musical colors and textures, taking the listener on a moody yet uplifting journey. Drawing inspiration from artists like Radiohead, Broadcast, Angel Olsen, traditional folk music from around the world and even the physical landscapes around them – from childhood homes to the city of Cincinnati – Turtledoves creates a truly unique sound that is both intellectual and entertaining. Read CityBeat's story to find out what to expect at their upcoming show at MOTR Pub.

Sound Advice: Jarobi Prepares DJ Show for BLINK Event at Woodward Theater
By Brent Stroud
Jarobi, a founding member of the legendary and influential hip-hip group A Tribe Called Quest, is set to make an appearance at the Woodward Theater. The group came out of the Native Tongues collective of the late ‘80s and early ‘90s that also included hip-hop luminaries De La Soul. Jarobi is featured and acts as host on A Tribe Called Quest’s 1990 debut record People’s Instinctive Travels and the Paths of Rhythm. He left the group during recording for 1991’s The Low End Theory to go to culinary school and pursue a career in culinary arts. Jarobi [born Jarobi White] built a career as an executive chef and restaurant manager while making a handful of appearances with Tribe over the years. Read CityBeat's story to find out more about Jarobi's BLINK DJ set.