This weekend, the Cincy Blues Fest — presented annually by the Cincy Blues Society — returns for its 21st year, a remarkable accomplishment for a music festival of any sort. The festival kicks off tonight and continues tomorrow at Sawyer Point along the riverfront.

The weekend features two main stage acts with serious ties to Cincinnati’s Blues past. Educator, author, DJ, singer and harmonica player Steven Tracy returns to Cincy to play the main stage on tonight at 7 p.m. with his band the Crawling Kingsnakes. A Walnut Hills High School graduate, Tracy worked with local Blues icons like Pigmeat Jarrett and Big Joe Duskin, becoming a part of the scene he’d later dig deeper into in the 1993 book, Going to Cincinnati: A History of the Blues in the Queen City. His writing career is extensive — Tracy has written dozens of album liner notes and edited/wrote/intro-ed several other books on a variety of subjects. Today, Tracy is a professor of Afro-American Studies at University of Massachusetts Amherst.

Saturday at 6 p.m. on the fest’s main stage, Stacy Mitchhart and his band are slated to perform. Mitchhart grew up in Cincinnati and spent time playing music on the East and West Coasts before returning to his hometown in the early 1990s and forming Stacy Mitchhart and Blues-U-Can-Use, a staple on the local Blues scene for a few years. After a move to Nashville, Tenn., in the mid-’90s, Mitchhart’s musical career really took off. His albums have been widely acclaimed and done well commercially — his 2011 release, Live from B.B. King’s, debuted at No. 6 on the Billboard Blues charts — and he’s received high-praise for his showmanship and remarkable Blues voice. In 2008, Mitchhart was the subject of the well-received documentary NashVegas Blues.

And here's the lineup for the Main Stage tomorrow:

Some of the coolest things at the Cincy Blues Fest can be found on the “specialty” stages — a “specialty” of the fest — which this year includes a “Women of the Blues” stage on Friday, headlined by national act EG Knight and also featuring locals Rio & The Ramblers, The Juice and Tempted Souls Band.

Here is the "Women of the Blues" stage ((aka the Arches stage) schedule for tonight :

The Blues Fest again presents the St. Vincent De Paul Local Stage on both days of the event, always an excellent snapshot of the current local Blues scene.

Here is a map of the Blues Fest grounds: 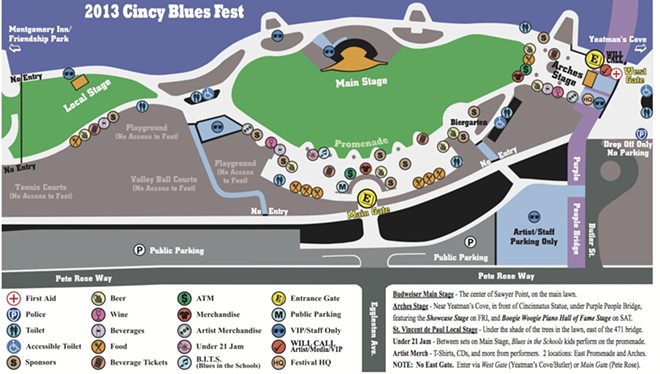 Tickets are $15 for Friday, $20 for Saturday or $25 for a two-day pass (tickets can be purchased at the gates or here). Visit cincybluesfest.org for everything else you need to know about the festival.