The Northside collaborative art space moves to Camp Washington in April; the OTR installation gallery opens a branch this week

Chase Public will have a new address in Camp Washington come April 1, accelerating the trend of arts groups and projects moving to and revitalizing that older and once heavily industrial neighborhood.

The literary-friendly performance gallery is leaving its Northside location, on the second floor of a building at 1569 Chase Ave. in the neighborhood's business district, for a bigger space in Camp Washington at 2868 Colerain Ave. There, it would be sandwiched between People’s Liberty’s planned new outpost at 2840 Colerain and Wave Pool gallery/art center at 2940 Colerain. The last performance in the Chase Avenue location is set for March 16, a reprise of the popular Response Project.

“It has a lot more to do with how nice that space is than being dissatisfied with this space,” says Scott Holzman, Chase Public’s executive director. “It’s bigger, it’s more comfortable, it’s nicer; there’s storage and office space, which is something that we’ve been needing, and it’s on the first floor, which is a big plus in terms of visibility and especially accessibility.”

Chase Public will retain the same name (“Colerain Public sounds too much like a school, even for us,” says Holzman) and the same philosophy of focusing on community collaboration and empathy through artistically minded performances and presentations.

Already on the books for April are a number of events: a new music performance from violinist Jack Bogard; a panel on publishing; the second presentation of The Slide Show Show; a handful of readings; and, eventually, an open house.

Holzman emphasizes the artist-and-community-led orientation of the programming, much of which has been dreamt up by attendees, will remain intact.

“Hopefully, that new physical environment inspires new ideas for how people can use that space,” he says, citing workshops and other events held at Chase that were the product of inspired attendees reaching out to work with the organization. “We’re not going to be too prescriptive about it in the beginning because it’s nice to see what emerges through people’s experiences, but we’re pretty sure that it’s going to be inspiring for folks.”

Camp Washington itself is experiencing significant growth as a cultural community. People’s Liberty, the nonprofit philanthropic lab already familiar for its Globe grant installations at its location on Elm Street in Findlay Market, opens its second “globefront” in Camp Washington from 7-10 p.m. Friday (March 9).

Its first grantee takeover will be LOOK, a literary and performance salon from Sidney Cherie Hilley and Anh Tran, in existence through April 21. AFBC (Anti Fashion Boot Camp) follows, opening May 18, and then SkateAble closes out the first round of programming at Camp Washington later in the summer.

“There’s a momentum happening there,” says People’s Liberty program director Aurore Fournier. “I know it’s only artistic-based at the moment, but I feel like we’re all getting that vibe that, ‘OK, things are changing for the better,’ and hopefully other things will follow up.”

Wave Pool, which describes itself as a “contemporary art fulfillment center,” was one of the first arts-based organizations to take root in the neighborhood in 2014. It has become a catalyst for change.

“We very quickly fell in love with Camp Washington and have, from the get-go, really wanted to be a progressive part of the neighborhood,” says Calcagno Cullen, a founder and executive director of Wave Pool.

Part of that progressive attitude includes the development of multiple community partnerships. Wave Pool has worked with the Camp Washington Community Board, the community council, River City Correctional Center, Washington United Church of Christ, American Sign Museum and Camp Washington Urban Farm, among others. Cullen says the goal is to try to “uplift” the neighborhood in different ways.

Wave Pool is part of the Made in Camp gallery walk/event, a recently developed neighborhood plan based on input from stakeholders and residents. It refers back to the area’s industrial roots, the many blue-collar residents and the growing community of artists and their spaces.

“It’s really cool to think about this as an arts district,” Cullen says, adding she wants change to come in a way that engages and interests the current residents. “That’s part of the reason why Wave Pool tries to do everything we can to change the neighborhood in ways that the people who live here want.” 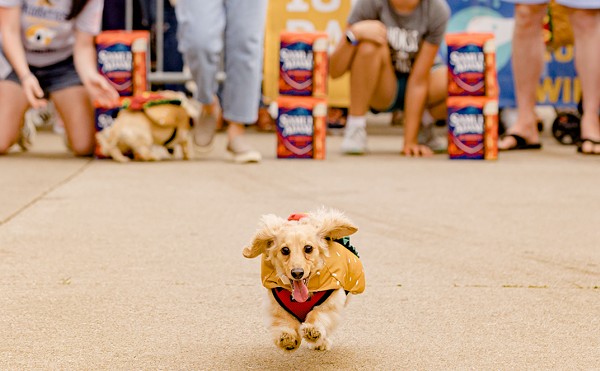