New artistic director Jodie Gates has big plans for the company as it enters its 60th year. 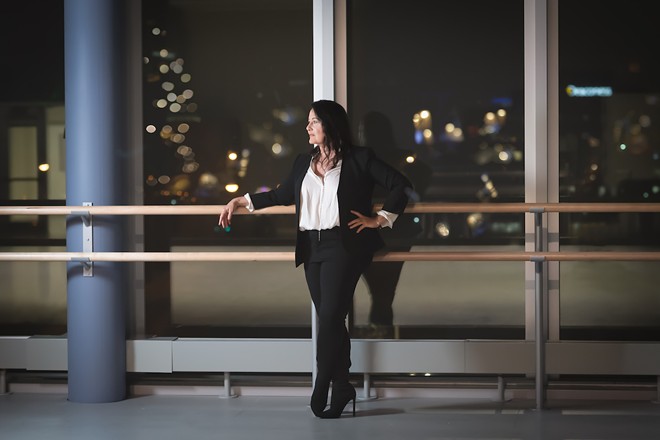 Jodie Gates is taking the Cincinnati Ballet to new heights.

As the new artistic director of the ballet, following the 25-year reign of previous artistic director and onetime CEO Victoria Morgan, Gates is inheriting an established company on the cusp of its next chapter.

“This first year, obviously, I’m going to do a lot of listening and assessing by being an observer, though I’m leading,” says Gates, who previously was commissioned to choreograph a piece for the Cincinnati Ballet’s 2014 season with local band Over the Rhine.

Originally from Sacramento, Gates started her dance career when she was recruited by Chicago’s Joffrey Ballet at age 16. She was later a principal dancer with the Pennsylvania Ballet, New York City’s Complexions Contemporary Ballet and Germany’s Frankfurt Ballet and has choreographed more than 60 original works. After founding the Laguna Dance Festival in 2005, she transitioned to academia and was most recently the founding director of the University of Southern California’s Glorya Kaufman School of Dance, a renowned national conservatory dance model.

“I know that sounds strange, but my hope is that the [Cincinnati Ballet] dancers start to develop a style, a community style,” she says. “A style that, for example, if a few of our dancers go out and do a community appearance somewhere across the nation, somebody will see them onstage and go, ‘Oh, wow, they look like a Cincinnati Ballet dancer.’ Wouldn’t it be great to get to that moment?”

Indeed, the company is primed for such a moment. Having outgrown its longtime home studios on Central Parkway with explosive enrollment and demand at its public dance academy, the company set its sights on an even bigger future and a facility to match. The brand new, 62,000-square-foot, $31 million Margaret and Michael Valentine Center for Dance opened in mid-2021 in East Walnut Hills. With a new home comes new opportunities — and a sharper focus on its public responsibilities.

“[We need to be] aware of popular trends, and looking at the voids in the field — there is more of a recognition of the form,” Gates says. “We need to demystify it, and what I mean by ‘demystify’ is that it’s not just for the European courts, it’s still kind of a folk dance of sorts. Putting it in a position of any other form of dance and being able to talk about it. I think it’s going to take time... I think there’s something about ballet right now that we have an opportunity to reimagine what its future will be.”

A typical day for Gates, whose first season with the ballet officially kicked off Aug. 8, includes in-studio and in-office duties. She typically will teach a morning ballet class for the company dancers, which is both a technique refresher and warm-up for the rest of their rehearsal day. On the day she spoke with CityBeat, she spent three hours after class teaching and coaching dancers on a ballet to be performed later in the season. She auditioned a dancer at lunchtime and then went back into the studio with dancers for another hour, followed by administrative and press interviews.

“I’ve always been a pretty good multitasker, and I just know that I have something to offer these individuals,” she says. “I feel compelled to be at the service of this organization and support the organization’s forward movement to whatever the next place is. If that is more opportunities to tour, bigger scale productions, expanding the company number in size, I’m assessing all of that and seeing what’s possible.”

There is an expectation of art to reflect its community, both locally and more broadly, in its performances and storytelling endeavors. Part of Gates’ vision statement for her role as artistic director includes a commitment to uplifting new choreographic and artistic voices, particularly those of female-identifying and BIPOC individuals.

“Telling new stories, that’s going to take some time, because I’m really interested in that and have some thoughts on how I would love to do that,” Gates says. “But it will take a little time and resources to get there. Also, yes, I do think that not only should we [have] more representation on stage, but also everywhere in the organization, and going out and just listening to people in marginalized communities. How do they feel about ballet, and what can we do to bring it into their lives? Are they interested? Is it something [where] we can build some bridges, and not just do a one-time visit, but actually do something more meaningful?”

Gates is calling on her existing connections to broaden the Cincinnati Ballet’s horizons and is also – like any good Cincinnatian (transplant or otherwise)
— looking in the ballet’s own backyard. For example, in May, she reached out to David Choate, artistic director of Revolution Dance Theatre, a diverse dance outfit. Choate asked if Gates would be willing to have some Cincinnati Ballet dancers perform in the organization’s inaugural Black, Brown & Ballet Summer Festival on Aug. 14 in Washington Park, to which Gates readily agreed. While that was a one-time situation, Gates already is laying a solid foundation for future collaborations.

The works in Gates’ first season at the helm of the Cincinnati Ballet were selected by Morgan, her predecessor, but she is as knowledgeable — and contagiously excited — about them as if they were her own.

“I love this season,” she says. “I think it’s fantastic.”

Up first is the next installment of the crowd favorite The Kaplan New Works Series, running Sept. 8-18 at the Aronoff Center for the Arts.

“New Works highlights three company choreographers, which I love that we do that,” she says. “I love that we’re giving an opportunity to our company dancers to make work.”

That includes premieres from Daniel Baldwin, corps de ballet dancer; Taylor Carrasco, corps de ballet dancer; and Melissa Gelfin De-Poli, principal dancer; all of whom have choreographed for the Cincinnati Ballet before. Local DANCEFIX fitness class founder and New Works favorite choreographer Heather Britt also returns with a new work for the company. The final work on the bill is a Cincinnati premiere from award-winning English choreographer Cathy Marston.

The rest of the season plays like a Cincinnati Ballet greatest hits album: there’s the hugely popular Carmina Burana and Extremely Close on a double-bill at Music Hall the first weekend in November, followed, of course, by The Nutcracker in December (which retains Morgan’s revamped choreography). February sees the return of Alice (in Wonderland), with the kid-friendly Family Series: Beauty & the Beast in April. The season closes in June with Bold Moves, another medley of new and existing shorter works, including one featuring a guest company, curated by Gates herself. The guest company will be announced in early September.

If this is what the beginning of Gates’ tenure with the Cincinnati Ballet looks like, one can only imagine the heights to which she will take it.

“I have a mission,” she says. “I’m not checking boxes. I want to take the time to actively listen. I probably will not succeed at all of it, but at least if we could just find a few bridges, that would mean a success.”

One sign that Gates already is well on her way to becoming a bonafide Cincinnatian?

“I love football,” she says. “I’m very excited that now I’m living in a town that has two exceptional teams, at the professional level and at the university [level]. I look forward to going to some games and getting to know the community. People have been so nice about extending and welcoming me from all over and I really appreciate that.”