Cincinnati's pro soccer team is coming off of a banner 2022 season, including its first-ever MLS Cup postseason berth. 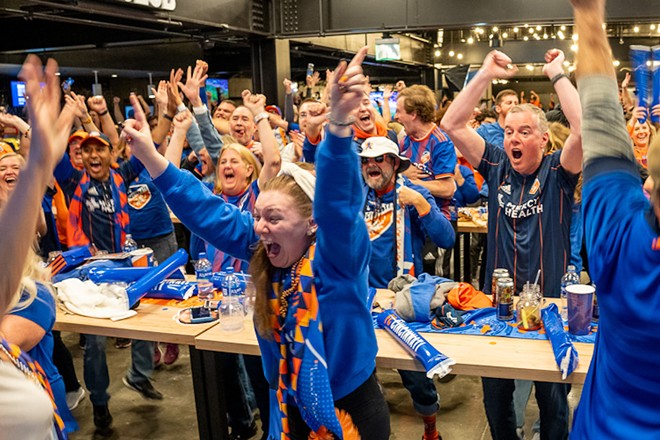 Cincinnati's pro soccer team will have a month of friendlies to get its groove back before attempting another postseason run.

FC Cincinnati will play five pre-season matches before the 2023 season officially starts. Team members are preparing at the Mercy Health Training Center in Milford before departing Jan. 23 for Walter Campbell Sports Park in Clearwater, Florida. There, the team will have a few days before it's showtime.

Here's how FC Cincinnati's slate of friendly matches is shaping up:
The Jan. 27, Feb. 10 and Feb. 14 matches will be played at the Walter Campbell Sports Park. The friendly against Philadelphia Union will take place at the Joe DiMaggio Sports Complex, while the game against Nashville will happen at Al Lang Stadium in St. Petersburg. Only the Philadelphia match will be open to the public; all others are closed-door, and none will be broadcast or streamed, according to press materials.

Other matches may be added to the pre-season slate.

The team will return to Cincinnati to train Feb. 21-24 before the Feb. 25 season opener against Houston Dynamo FC at TQL Stadium.

Major League Soccer released 2023 schedules for each of its 29 clubs in December, and this year will mark FC Cincinnati's first season opener at home. All matches will be available on Apple TV, with the Aug. 20 road trip against the Columbus Crew also appearing on FS1. 
Season tickets are on sale now, while single tickets will go on sale Jan. 26. Find the full schedule on FC Cincinnati's website.

FC Cincinnati had a banner 2022 season, including its first-ever MLS Cup postseason berth, a postseason win against a higher seed and a club record for consecutive scoring games. Cincinnati went 12-9 with 13 draws in the regular season, clinching its spot in the playoffs with a win over D.C. United during the final game Oct. 9. The Orange and Blue followed that up with an MLS Cup playoff victory against the New York Red Bulls, with the season coming to a close on Oct. 20 with a playoff loss to Eastern Conference top seed Philadelphia Union. The 2022 season also marked the first time Cincinnati did not finish in last place in the Eastern Conference.