In 2020, the National Trust for Historic Preservation placed the Terrace Plaza Hotel on its list of the 11 most endangered historic places in America. 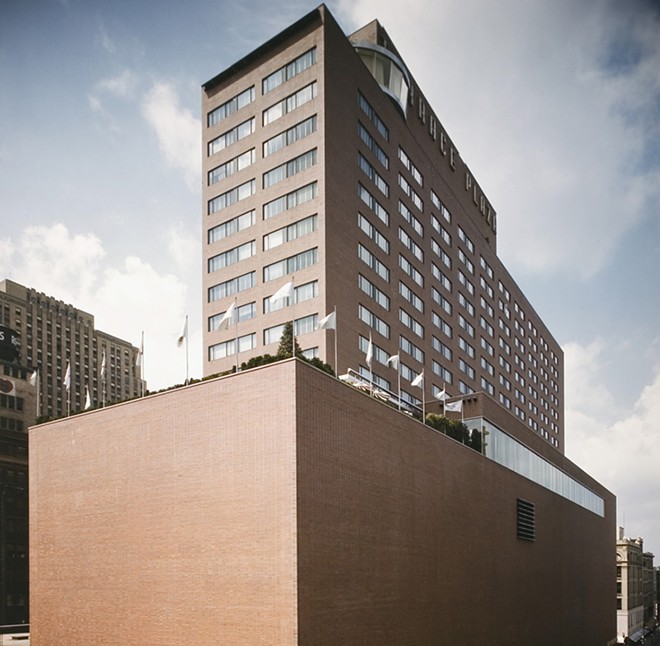 A Cincinnati skyscraper with a storied past has finally been sold after months of legal battles and other setbacks.

On Sept. 19, the Terrace Plaza property in Downtown was sold for $10 million to Cincinnati Development III LLC, according to a report from the Hamilton County Auditor's office. Cincinnati Development III LLC is an affiliate company belonging to Anthony Birkla of Indianapolis-based Birkla Investment Group.
Constructed in 1948, the plaza was the first International Style hotel built in the United States and was one of the first hotel construction projects launched after World War II, with a majority of the design work completed by a 24-year-old female architect, Natalie de Blois.


If you’re unfamiliar with the 20-story structure at 15 W. Sixth St., it’s the building that looks like a big brick box with a skinnier brick box sitting on top of it, to inelegantly describe it.

The mixed-use skyscraper features a mostly windowless seven-story base, once home to department stores Bond and JCPenney, with a 12-story structure on top. That had been the location of the former avant-garde Terrace Plaza Hotel and its once grand five-star rooftop restaurant.

While the hotel closed in 2008 and the structure has been largely vacant since then — save for a few ground-floor retailers — the Terrace Plaza was listed on the National Register of Historic Places in 2017. In 2020, the National Trust for Historic Preservation placed it on its list of the 11 most endangered historic places in America, calling it “an architecturally innovative building that helps tell the story of ground-breaking female architects.” And in 2022, Docomomo US, a nonprofit dedicated to documenting and conserving Modernist structures, called it one of the “11 most threatened Modern sites.”

de Blois — who launched her career working for Skidmore, Owings & Merrill, which built the plaza and is now a major architectural firm — was before her time. She constructed a vision for a building filled with Modernist art, futuristic push-button elevators (Architectural Digest says the plaza was the first hotel without human elevator operators) and space-age conveniences, like motorized beds that unfurled from the walls and guest-operated thermostats. A prescient nod to the coming Atomic Age design of the 1950s, the hotel decor incorporated organic shapes and Formica, terrazzo and metal finishes.

Cincinnati Terrace Associates LLC — an affiliate of the New York-based firm JNY Capital — was the former owner of the Terrace Plaza and bought the building in 2018 with plans to renovate it. It never did. And the “failure of the building to be maintained” by Cincinnati Terrace Associates and multiple previous owners has resulted in serious structural and code compliance issues, according to Cincinnati’s Director of the Department of Buildings & Inspections, Art Dahlberg.

In a City Planning Commission hearing held on April 22, Dahlberg detailed the many issues facing the Terrace Plaza: the roof has failed, rain pours inside, the ceiling and walls have collapsed, there’s no fire alarm and some of the masonry is crumbling. He noted an incident that occurred in 2018, when a portion of the facade fell off the roof and lodged itself in the windshield of an occupied car. That resulted in nuisance charges of roughly $60,000 against Cincinnati Terrace Associates LLC — not the first fine the city has leveraged against it. According to Dahlberg, the company has been issued at least 175 civil citations for around $1,000 each.

Birkla has said he’s spent nearly $1 million already in federal court fighting JNY Capital for ownership of the Terrace Plaza, and Bloomfield/Schon, a Cincinnati architecture and redevelopment firm that has tackled historic renovation projects like the Peters Cartridge Factory in Maineville and American Can Lofts in Northside.

The main difference between the two redevelopers is that Birkla Investment Group is against landmark designation, while Bloomfield/Schon is for it.


The biggest drama around the Terrace Plaza — outside of the deteriorating conditions — is the somewhat awkward lower base. Redevelopers seem to be obsessed with its lack of windows. Birkla said to make the space appealing to modern-day tenants, they’d need to put in giant windows on those first seven floors and above. At this point, no concrete plans for the building have been announced. What Does It Mean if Cincinnati's Terrace Plaza Hotel Becomes a Designated Local Landmark?: A historically significant Cincinnati building that people either love to love or love to hate is one step closer to receiving local landmark designation — and will soon be up for auction.