What Does It Mean if Cincinnati's Terrace Plaza Hotel Becomes a Designated Local Landmark?

A historically significant Cincinnati building that people either love to love or love to hate is one step closer to receiving local landmark designation — and will soon be up for auction. A historically significant Cincinnati building that people either love to love or love to hate is one step closer to receiving local landmark designation.

Last week, the Cincinnati Preservation Association sent out a call to action asking the public to email the City Planning Commission in support of making downtown’s Terrace Plaza Hotel an official landmark, writing: “We have not made requests for public support in the past but this is such an important part of Cincinnati's historic legacy we are asking now.”

Constructed in 1948, the plaza was the first International Style hotel to be built in the United States and was one of the first hotel construction projects launched after World War II, with a majority of the design work completed by a 24-year-old female architect, Natalie de Blois.

Photo: Nick Swartsell
The Terrace Plaza as it looks today.

If you’re unfamiliar with the 20-story structure at 15 W. Sixth St., it’s the building that looks like a big brick box with a skinnier brick box sitting on top of it — to inelegantly describe it. In a city stuffed with romantic and ornate Italianate architecture, the Terrace Plaza’s unadorned Modernist facade paints a striking contrast.

And one with national significance.

While the hotel closed in 2008 and the structure has been largely vacant since then — save for a few ground floor retailers — the Terrace Plaza was listed on the National Register of Historic Places in 2017. And in 2020, was placed on the National Trust for Historic Preservation's list of the 11 most endangered historic places in America.

Now, the building is up for sale.

Current owners, Cincinnati Terrace Associates LLC — an affiliate of the New York-based firm JNY Capital — bought the building in 2018, with plans to renovate it.

There are numerous structural and aesthetic fixes that need to be made: boarded-up windows need to be replaced, plants are growing from the building, key operational components are missing and more. And according to the Cincinnati Enquirer, Cincinnati Terrace Associates LLC owes thousands of dollars to creditors and the city, which in 2019 filed public nuisance charges against them for roughly $60,000 in code violations when a chunk of the plaza facade fell off and hit a car.

Cincinnati Terrace Associates LLC have since filed for bankruptcy. And qualified buyers have until May 20 to submit a purchase bid on the Terrace Plaza “equal to or in excess of $10,500,000,” according to court documents. If more than one entity meets or exceeds that $10.5 million bid, the “Hotel Property shall be sold at a virtual public auction” on June 3, per an order from the United States Bankruptcy Court Eastern District of New York. If no one bids, ownership reverts back to the bank/lending institution. 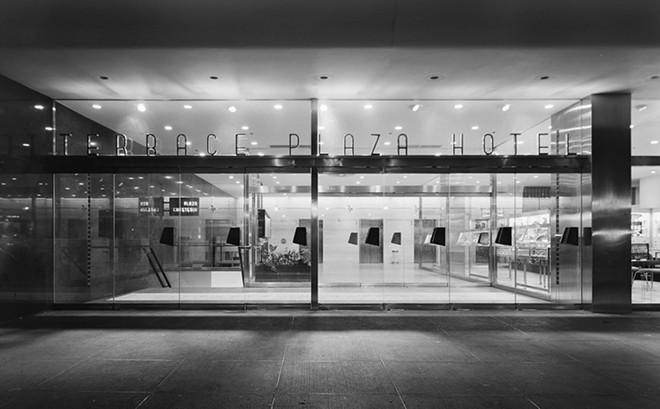 So what does the Cincinnati Preservation Association’s (CPA) drive to make the Terrace Plaza a local landmark have to do with the bankruptcy filing? Nothing really, says CPA Executive Director Paul Muller. It’s just about what happens to the building afterward.

“The ownership of the building has been in the courts for many years,” Muller tells CityBeat. “And one of the reasons we went for the landmark designation now is because those cases have sorted their way out and it's moving forward and it'll be sold at the bankruptcy auction and somebody will be redeveloping it.”

Local landmark designation — which is totally separate from the Terrace Plaza’s nationally historic designation — is a zoning process, Muller says, and just provides guidelines for what renovations can and cannot be done to a historically significant structure.

“When a building is going to have a change to it in a historic district, or as a local landmark, to get a building permit, you have to go to the historic conservation board and show them the work you're doing. And then they look at it and they decide if it's consistent with the historic character of the building,” he says. “So it allows for a lot of change — you see rooftop decks all over Over-the-Rhine, you see people adding on to buildings that are historic — so it's very flexible.”

On Monday, March 27, Cincinnati’s Historic Conservation Board held their own hearing and voted 5 to 1 to recommend the Terrace Plaza become a local landmark.

Now, the case moves on to the Cincinnati Planning Commission, which will discuss the matter in a hearing on April 22. After they make their decision to either recommend it for landmark designation or not, the case moves to Cincinnati City Council, which has the final say.

Two similar projects recently went through it, Muller says: St. Mark’s Church in Oakley, which got unanimous support from all three entities to become a landmark. Instead of being demolished, it will now be redeveloped using a historic tax credit. The second was the Radel Funeral Home/former Schulte House in Price Hill, which did not receive landmark status and will be demolished and turned into a workforce development center for the Boys & Girls Club, according to local media reports.

Muller does not believe the Terrace Plaza is in any way on the chopping block for demolition, regardless of how city council comes down on the vote. He believes redevelopers would still use the physical concrete structure in place and then build “a new skin around what there was.”

But the landmark designation would help ensure the building’s local and national legacy.

“It's a nationally significant, historic building,” Muller says, “and it's connected to the moment Cincinnati is seen as sort of introducing the nation to an era of Modernism and post-war prosperity. It's on the National Register of Historic Places, at the national level of significance. You can have local, statewide or national, and only a few properties are on that because they're important to the entire nation.”

Being on the national register and local one also qualifies the building for historic tax credits, on both the federal and state level, which would be a boon to any developer.

“The state historic tax credit in Ohio is really powerful,” Muller says. “You can get 25% of your cost back. And that's on top of the federal tax credit, which is 20%. So you add these two together (and) a developer can get 45% of their costs if they do a historic tax credit redevelopment. The Cincinnati Renaissance Hotel was done that way. The City Loft Apartments. The Mercantile building has been done that way. The Tri-State Building, American Can Building — all of the major redevelopment of older buildings have been funded by this mechanism. And we think the Terrace Plaza should be funded by that.”

Some developers have pushed back on this concept, including Indianapolis-based developer Anderson Birkla, who wanted to buy rights to the property. The Cincinnati development group which represents Birkla and that company’s interests are quoted in the Business Courier as saying, “I seriously doubt any developer would purchase the building. The (landmark) guidelines don’t allow the flexibility to create a financially viable redevelopment of the property. It seems to us that you can either save the idea of the Terrace Plaza or you can save the building.”

And Muller agrees that without the historic tax credit savings, it might not be possible to redevelop the plaza. “But that would be true of the Cincinnati Renaissance Hotel. It'd be true of City Loft Apartments. It would be true of almost a half of the buildings that are done in Over-the-Rhine,” he says.

“It can still be redeveloped, and we're supportive of that,” Muller continues. “And it's going to be changed. You know, buildings need to change — we're not trying to fix it. (But) the changes need to be done in a way that's sensitive to its history.”

Some suggestions Muller threw out were using the somewhat awkward lower base, which has few windows and was originally constructed to house two department stores, as a parking garage. (“Structural engineers who have studied the building and the floors say it can support parking,” he says.) The remaining floors could be used as apartments or office space, he says, referencing similar projects that have saved and restored Mid-Century hotels like the Statler Hotel in Dallas or the Loews Hotel in downtown Philadelphia.

“There's a creative way to approach the building, get the tax credits, and have it be very successful and then build on its legacy. Legacy has asset value,” Muller says.

And what a legacy the Terrace Plaza has.

The aforementioned de Blois, who launched her career working for Skidmore, Owings & Merrill, which built the plaza and is now a major architectural firm, was before her time.

“She's now considered one of the pioneers of modern architecture in America and never got credit in her life,” Muller says.

The Terrace Plaza was a premonition of the coming sleek aesthetics of the 1950s and beyond. de Blois constructed a vision for a building filled with Modernist art, futuristic push-button elevators (Architectural Digest says the plaza was the first hotel without human elevator operators) , a television in every room, guest-operated climate control and a distinctive eighth-floor terrace supported by a block-long, windowless facade.

“(She) pulled together fabrics, dinnerware, uniforms, Modern art and she went and worked with the Modern artists — (Joan) Miró and Saul Steinberg. I mean, it was just such a comprehensive view of how to create a place in the world," Muller says.

Two iconic site-specific commissions for the Terrace Plaza — one by Miró and one by Steinberg — are now part of the Cincinnati Art Museum’s collection, as is a mobile by Alexander Calder that once hung in the hotel lobby. Miró’s work graced the top-floor Gourmet Room and Steinberg’s “Mural of Cincinnati” was located in the lobby’s eighth-floor Skyline Restaurant.

And while perhaps whatever the Terrace Plaza becomes will not be as groundbreaking as its first iteration, its past still has a future in Cincinnati.

Cincinnati's Terrace Plaza Hotel Is One of America's 11 Most Endangered Historic Places: Constructed in 1948, the Plaza was the first International Style hotel to be built in the United States, with a majority of the design work completed by a 24-year-old female architect, Natalie de Blois.